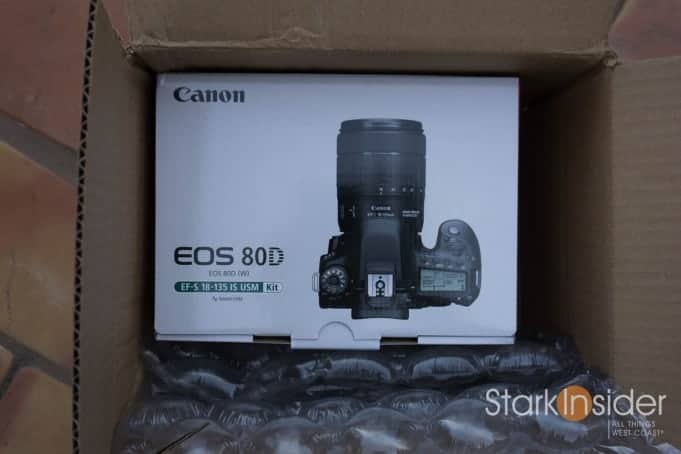 The big news out of Canon when it comes to its mid-range DSLR line-up is the brand new EOS 80D. The follow-up to the 70D has been a long time coming, as its predecessor first hit the market in 2013. Three years is an eternity by modern camera manufacturing standards. Just ask Sony. They like to introduce new models every other day it would seem. Good on them. Good on all of us. More cameras, more choice. Doesn’t seem like a bad proposition for us video shooters.

I’ve been taking the Canon EOS 80D on a variety of shoots for Stark Insider. I’ve shot live concerts, interviews, and some miscellaneous footage around San Francisco. My first 80D specific shoot is slated for Vancouver some time this summer where I’ll use the 80D solely for a travel video. Meantime it’s served as the perfect “B” cam, as they say, to my Canon C100 II.

How good is the 80D at shooting video?

If you’re in the market for a mid-range/enthusiast camera like the 80D, the burning question: is the 80D any good for shooting video?

Based on my hands-on time so far, I would say: Yes. It’s excellent.

That’s not much of a surprise. The 80D isn’t so much a revolution, than a baby step. It takes what the 70D did well — primarily auto-focus and ease-of-use — and upped the specs in just about every area. Dual Pixel AF is better than ever, thanks to an increased number of focal points. Shooting speed is better, courtesy of an upgraded processor. Overall, the camera feels like a zippier version of the 70D. In my books, that’s a very good thing.

Here are some recent examples of videos shot on Canon, including the 80D, 70D and C100 II.

Canon 70D, shot at the San Francisco Art Institute. One of my all time favorite shoots. I find the “second skin” and alter ego themes in this exhibition fascinating. My most personal video — if that really matters.

Release the hounds. Yes, the 80D does not have 4K recording ability. To many that will be a major turn-off.

If you’re thinking about buying a new DSLR or mirrorless camera, though, I’d humbly suggest you consider the primary subject matter you plan to shoot. That could very well help you determine if the higher resolution offered by 4K — and the storage and workflow challenges that come along with it — is really necessary.

For me, 1080p is perfectly well and good. In fact, I often go the extra distance to make footage look less sharp. Blasphemy I know. The reason is that I simply prefer a softer film look. Something ethereal. I enjoy using Premiere Pro plugins like Film Convert, and, more recently, the new Lumetri Color panel (superb). I eschew razor sharp footage as often it can look electronic, or video-ish. Give me 1080p and an organic image or give me pixel peeping death.

Still, I see 4K as possibly important to those shooting travel and landscape. Or wildlife. There, detail is paramount.

Yes, I did pre-order a RED Raven camera which features 4.5K capability. But that’s not my primary reason for getting a RED — it’s for that amazing Dragon sensor and it’s stellar dynamic range and killer image.

And one last parting thought on the topic of 4K…

I read many sites and blogs that simply dismiss a camera because it lacks 4K. Dare I call that short-sighted? An iPhone has 4K video. Then that’s all you need! Okay, but the $60K+ RED Weapon has 6K. Even better — and that camera is Hollywood’s camera of choice for shooting high-end music videos (Taylor Swift). The too-digital-looking-for-my-taste Panasonic G7 has 4K. The new Sony a6300 (I have the a6000 and love it as a compact photo shooter) also has 4K. The 80D? No 4K. But guess what? These are all just tools. And 4K, like 1080p before it, and who knows after it, is just a spec, just a measure of resolution. It tells you nothing of: image quality; dynamic range; consistency of accurate focus; camera handling; and so many other factors that could make or break your video production. A four year old ARRI Alexa “only” shoots 1080p. How good do you think the image is that comes out of that sensor? Just a thought!

About my only complaint with the 80D is Canon’s reluctance to include a lens hood with the kit. Kind of chintzy for an $1,800 (USD) outlay, no? No potato chips for us!

Aside from that bit of Rose F. Kennedy (look it up), I think the 80D is a solid, enticing proposition for video shooters. I also like the Panasonic G7 (but still think it falls a bit short in image quality), and the Sony a6000 and a6300 (APS-C in a compact body). Yet I would take an 80D to a shoot every day of the week; there’s something about the way a Canon body feels just right in the hand. Everything is nice and tactile. Performance is fast. And it just works.

Granted, I’m admittedly a Canon guy — Vixia camcorder, T2i, 60D, 70D, 80D, C100 II. If my grandfather had shot on Nikon or Sony then my narrative may have turned out otherwise.

In the end, tools are simply tools. We need worry about everything else by a factor of about a million: composition, lighting, sound, location, script, subject matter. Give Hitchcock any camera on the market today, and surely he’d turn out something brilliant. For the rest of us, we need only try, and try, and try.

My advice: get a DSLR (or mirrorless), get out there, and practice your heart out. Creativity is truly one of the joys of life.

Canon 80D Reviews Worth a Look

“For Canon system users, specifically enthusiasts considering an upgrade from either a Rebel or an older camera, there is an awful lot to like about the 80D.”

“It has a high quality sensor that is able to capture a good level of detail while keeping noise under control and its main autofocus system is super-quick.” (a comprehensive 80D review worth checking out if you’re still in research mode)

And, one that’s less convinced…

If your budget can’t quite stretch for the 80D, I’d look for a deal on the 70D. It’s got lots of legs left. Or maybe consider a used Rebel T2i off of eBay. Load Magic Lantern on it and have at it.

Bottom line: I couldn’t ask for more from an APS-C DSLR camera. The 80D meets or exceeds all my expectations.

More soon on the 80D (and C100 II and RED Raven) and my adventures shooting video for Stark Insider.