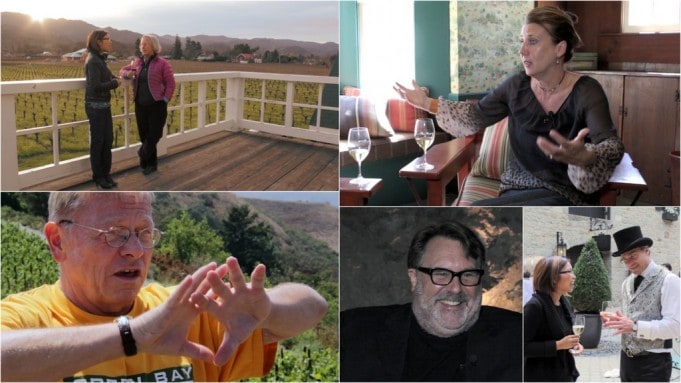 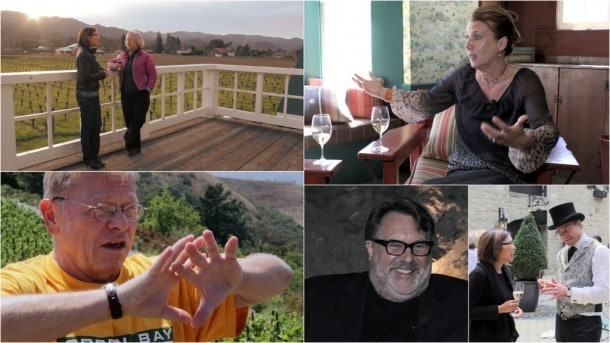 Wine and personality. The two are virtually synonymous. At the very least, like John Carpenter and scary movies, they make for better-than-average bedfellows. Exuberant story-telling. Tales brimming with whimsy, legend, even heroism. It seems every bottle of wine these days is ensconced in personality. After all, this is, as Jean Charles-Boisset once told us, “the elixir of the Gods.” It’s only natural (and organic) that the faces of the wine industry themselves come across larger than life.

Whether it’s pursuing an obsession to produce the best New World Pinot, nurture the finest small lot Napa Cabs, or resurrect the spirits of turn-of-the-century Counts in hopes of reviving a forgotten wine property, this year was one for the ages when it came to wine personality.

Over the past twelve months or so there’s been no shortage of interesting wine news, trends and, at least a few surprises to boot. The more things change, however, the more they tend to remain the same. Many watched once again as Amazon forayed into wine retailing with its first full year of operation. Not much came of that, so far as I can tell. Robert Parker “left the building” when in December of last year he (surprisingly) sold off The Wine Advocate, a publication that had become a powerhouse, almost single-handedly etching the 100-point wine scoring system into our collective conscious. And, again, despite ruminations of a shake-up in the world of wine criticism, not much came of that, so far as I can tell. Several reports suggested that the influence of social media on wine buying had taken foot in a big way in 2013. But not much came of that (yet), so far as I can tell. Still, social media is still in its infancy. ROI and influence will only build over time as the young born-with-an-iPad generation come of age.

Who will assume the throne, and become the modern day face for the domestic wine industry?

Millennials, it would seem, get more than their fair share of headlines. That oft-repeated refrain can be boiled down to: “we like honest stories!”; “we like cheap wine!”; “Cab in my left hand, craft beer in my right!”

These days, though, in Napa in particular, many are arm-chair quarterbacking. Who will fill the heady shoes left by wine legends such as Robert Mondavi, Mike Grgich, and others on that exclusive short list of first generation visionaries? Who will assume the throne, and become the modern day face for the domestic wine industry?

To help answer that question–one that perhaps begs the necessity of even being asked–I reviewed the Stark Insider wine video and article archive for 2013. Just like this year’s harvest, it was quite the bumper crop. I whittled down the list. I re-watched the interviews, then Googled these colorful folks to uncover more, learn backstory. Finally I short-listed the group you see here below, the Stark Insider top 5 wine personalities for 2013.

It’s hard to go wrong with dynamite. Jeff Smith of Hourglass Vineyard did what any self-respecting wine entrepreneur ought to do: he took some explosives, stuck them into the side of a hill near the Silverado Trail, and blew out a wine cave. Oh, and because it blew up real good, he tried again, the second time using a half-box of “leftover” dynamite to blow out a hipster wine library (as seen in the interview above) where he promptly installed a sparkly, effervescent overhead light and an equally effervescent marble table to match. It was here, at Hourglass, that I attended the year’s best panel discussion on terroir. Featuring some of the region’s top winemakers, including Tim Mondavi of Continuum, it was the kind of day that had me scratching out an endless stream of notes. We also gleaned interesting tidbits from Jeff regarding the 100-point system. In this world of Likes and Tweets, and tight-knit cliques of like-minded individuals congregating online, was there a need anymore for a seemingly antiquated system? “There is kind of a sea change going on. And that dovetails with what’s happening with consumer education,” noted Smith. “The general consumer out there has more information to draw from, and is becoming more wine savvy and sophisticated all the time.”

Gina Gallo was recently named the most powerful person in wine. And lest you think that means she sits all day in a magical tower atop the Mayacamas Mountains, fanning pixie dust across the natives, think again. At the Sonoma Wine Country Weekend this summer (a massive annual tasting of Sonoma’s best wines and culinary pleasures), Gina was spotted working the crowd. When we arrived she was entertaining and informing a small tour group. She poured wine. Told stories about her great grandfather Julio and Uncle Ernest. Vividly described the winemaking process. It’s easy to forget that this is the matriarch and winemaker for one of America’s (and the world’s) largest wine empires. You’d also never know, based on her boundless energy, that she was the new mother to twin girls. Remarkably, she confesses in this Stark Insider interview (see above) that she’s–of all things–an introvert. She discovered, to keep the family tradition alive she’d have to challenge herself. She heeds her own advice: “Do the things you really don’t feel comfortable doing. Get out of your own skin.”

Corison Winery sits right alongside the iconic Highway 29 in the heart of Napa. ‘Throwback’ would be one word I’d use to describe the understated tasting room. In a world of increasingly showy Napa buildings and gaudy artifices, Corison is a refreshing return to basics, featuring a simple, two-story panel-board barn with white accents (that, thankfully, did not explode as depicted in the above visit). It’s clear here what matters most. And that would be Napa Cabernet. ‘Stellar’ is another word to keep in mind. Handcrafted to painstaking perfection, year after year, the Cabernets produced by Corrison are consistently beautiful. Spend time with Cathy Corison and you learn that she is dead-set on the enterprise of wine. She disdains the idea of trends. That means farming the land, bringing its unique terroir to the glass; she eschews ratings, compromise and superficial marketing tactics. I’d say it’s a welcome return to roots. But it seems, for Cathy Corison, like it’s always been this way. That’s a welcome Napa tradition worth celebrating in 2013.

By his own admission, T.J. Rodgers is starting in the wine industry with a lot of money. Known foremost as a stalwart of Silicon Valley (Cypress Semiconductor), and soon thereafter as a repeat testifier at Congressional hearings on Washington Hill, he’s recently shifted at least some of his time and energy to wine. Clos de la Tech sits high atop the Santa Cruz Mountains. High enough that, during my visit this year, as a small plane passed, apparently flying dangerously low, I was reminded by T.J.’s personal sommelier that it was us who were up in the clouds. Out of all this year’s personalities, T.J. is the one most likely to melt your brain. This is a man on a mission. And part of that mission involves copious amounts of math, organic chemistry and a seemingly never-ending stream of theorems and formulas. Root-balls? There’s a mathematical equation for that. Siphon calculations? Say, let me borrow that there napkin and sketch out some deductions. And how about the New World’s best Pinot? Ah, don’t get him started! T.J.’s lifelong aspiration to match the best of France first took him across Burgundy where he sought to learn from the masters. A side-trip to Germany enabled him to source (after much negotiation) a custom-made tractor suitable enough to farm his steeply raked vineyards. Rodgers is also known for his generous donations and contributions to the advancement of winemaking at UC Davis. Most recently he donated a “wireless wine fermentation network” to the school; featuring 200-liter fermentors — now referred to as “TJs”– and individually equipped with automated temperature control, an automated system for pumping juice over grape skins when making red wines, and a sensor that monitors fermentation progress in degrees Brix.

JCB. The man. The suave. The accent. If James Bond operated a winery this is what it would look like– though I’m quite certain Daniel Craig does not use a BlackBerry. As Jean-Charles himself notes, when it comes to technology, “I’m a little bit behind.” When it comes to wine, however, the larger-than-life French wine entrepreneur (La Famille des Grands Vins) is firing on all cylinders. He recently gave the aging Buena Vista Winery a face-lift (as seen in above video) and has fancied Raymond Vineyards a big stroke of artistic rouge, featuring most notably the infamous red lounge. In 2009 Jean-Charles married Gina Gallo, creating the power couple wine equivalent of Brad Pitt and Angelina Jolie. Ever flamboyant, he can be seen wearing cool suits, costumes, and all-manner of interesting hats, many of which would likely not be out of place on Halloween. In the video above, he even wields a saber to christen the “We’re living in a moment of danger!” opening of the renovated Buena Vista wine cave in Sonoma. It’s worth noting, this is a man that knows how to throw a party. If you ever venture to the annual Premiere Napa Valley wine auction be sure to hit up any of his soirees. They are not soon forgotten. At this year’s PNV post-party a shapely Cirque-like performer hung upside down from a rope pouring bubbly for guests in the Raymond fermentation room. Wine and personality. What did I tell you?!