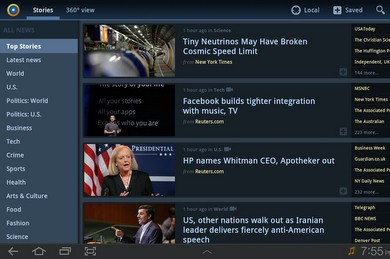 This News360 app review is the final feature in a 5-part round-up of magazine and news discovery and aggregation apps for iPad and Android. Previous stories featured reviews of Zite for iPad, Pulse for iPad/Android, Flipboard for iPad and Zinio for iPad/Android. Don’t forget: we have the inside scoop on an announcement in this space on Monday! 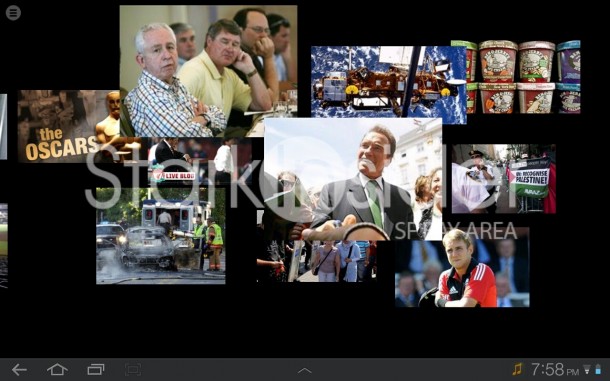 News360 for Android Honeycomb and iPad impresses with its unique, topic-based navigation model. And it’s a fitting way to end this week of news discovery and nextgen magazine apps we’ve been reviewing on Stark Insider (well, almost end … we have one more yet-to-be-announced app coming on Monday, plus an interview that delves into market forces, reveals the opportunity for new media and explores why we’re seeing so much focus on news apps these days).

If you like surfing headlines on your tablet then this app stands out from the others — notably Zite and Pulse — if only because it’s focused less on the source, and more on the topic. Not that the others don’t organize around topic too. They do. But whereas you only get one story with the other guys — REM is breaking up! — you get the same story here, but presented with other perspectives a mere tap away. It’s a nice way of broadening the editorial lens — be it international, political, or just good old fashioned quirky. 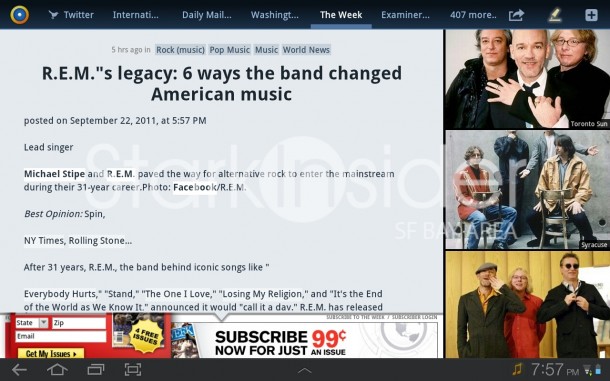 Sure, News360 doesn’t have Flipboard-like gloss, but, then again, who does?!

Keep in mind, though, that this app is available for Android Honeycomb. That’s welcome news in itself for us app-starved Moto Xoom and Samsung 10.1 fans (great kit, needs better apps… more to come on that).

Because Android tablets are landscape-oriented, testing was a change-up from the tall magazine-like world that is Flipboard, Zite and Zinio. I actually quickly became accustomed to holding the slate in landscape, using my thumbs to swipe and scroll. 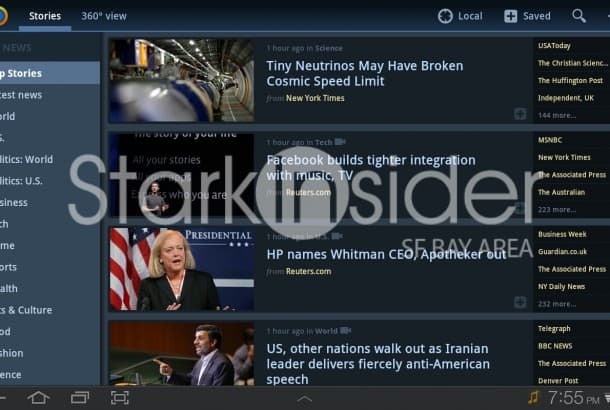 News360 is less grid-like than Pulse. That’s a good thing. On the left is a vertical menu of topics — top stories, latest news, politics, tech, health, arts & culture, etc. The majority of the rest of the screen is used to present a vertical stream of related headlines. Again what’s different here is the ability to surf the same story across multiple sources. Touching a story brings up an excerpt with an option to read more. You can also dig deeper on the same headline across multiple sources. For example, HP named Meg Whitman CEO. TechCrunch had a video piece on the story. Meanwhile, All Things Digital updated the historic Silicon Valley’s “invent” tag line with a new Tim Burton-inspired version.

If you want to impress your friends then you’ll want to immediately pull up the visual timeline of a particular story. It’s slick. So, did a tiny nuetrinos break the cosmic speed limit (and btw- Duran Duran has been “Faster Than Light” since the early 80s)? A touch of the top bar brings up a timeline with headlines and photos related to the story. As we learn, if this headline is true, it will mark the biggest discovery in physics in the past half-century. Well, excepting the fact that television actor Kirk Cameron has taught us all that the planet is merely 4,000 years old.

Unless someone can convince me otherwise ( …there’s still that announcement coming on Monday… ) I’m willing to go out on a limb and say this is the best news reader app for Android Honeycomb. It runs neck-and-neck with Pulse, and I actually really enjoy using both. One (possibly huge) advantage in Pulse’s favor is its flexibility in RSS feed management – so, to be fair, these two apps are probably more complimentary, less competitive. 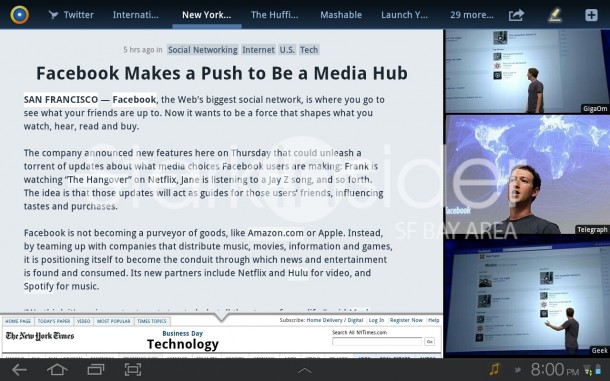 I also found great promise in the personalization feature. You can connect to Facebook, Twitter, Evernote, and/or Google Reader, and have the app analyse your interests. In testing it was a little slower than I would’ve liked, but it did eventualy discover 45 topics of relevance, based on my Twitter account. The ability to separate your interests from “all news” is a clever, unique concept, and another reason why I think News360 is a stand-out.

Also, a plus: single click view of local stories. I was able to learn, for example, that el-primo backstop Nittmymaki for the San Jose Sharks will be sidelined for 12 weeks. What, me worry?! I say: let the other Pacific bums get their head-starts. See you in round 1 in 2012. (okay, I hope I didn’t just jinx the Sharks).

Don’t miss the whole series of news discovery and magazine app reviews for iPad and Android on Stark Insider:

Others on my radar, but not yet full tested: News Republic, SkyGrid.

Bonus: see you on Monday… the story continues…