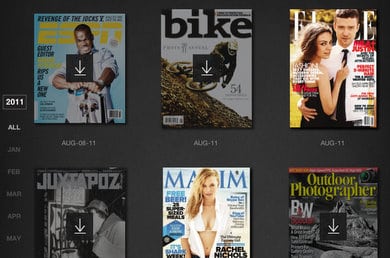 4 out of 5 stars - 'Smashing'
Available for iPad and Android Honeycomb
VERDICT:
"Smashing"
If you like magazines, you'll like Zinio.
Review by Clinton Stark

This Zinio app feature is the 4th in a 5-part review series of magazine and news discovery and aggregation apps for iPad and Android. Previous stories featured reviews of Zite for iPad, Pulse for iPad/Android, and Flipboard for iPad. Don’t forget: we have the inside scoop on an announcement in this space on Monday! 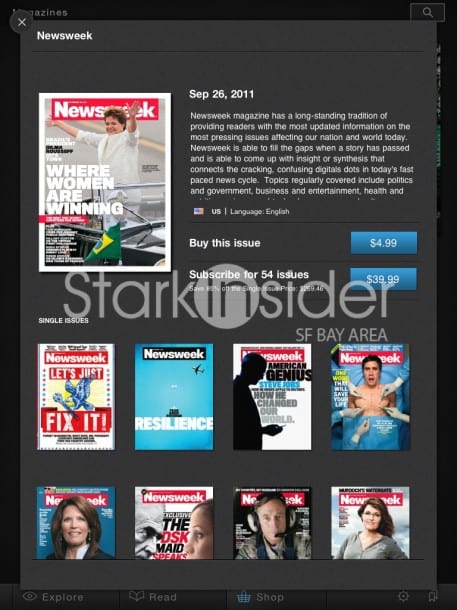 Of all the news discovery and social magazine apps we’re looking at this week, Zinio (available for iPad and Android Honeycomb) is the most conventional – meaning it most resembles a “port” of something that already exists. That’s not a bad thing.

If you’re looking for a digital version of your favorite magazine — Newsweek, European Car (yeah!), National Geographic, Popular Science, ESPN Magazine, Maxim, etc. — then this app will likely fit the bill. And speaking of bill, it doesn’t come free. Just like their physical counterparts, these digital copies are available for purchase per issue or annually.

So, true, Zinio is not exactly an apples-to-apples comparison with Flipboard, Zite and Pulse. Far from it, actually. But, still, any app round-up that is looking at the future of media, news aggregation and publishing should include it, regardless.

The easiest way to think of Zinio, number three on the list of top-grossing iPad apps, is as a digital newsstand (with 4,500+ magazines). In that regard, it appears to have an early lead. Google, Apple and others are reportedly working on their own versions of the proverbial hot dog stand and mag rack. Only, you won’t find this them at Union Square or Times Square. Rather, iTunes and the Android Market (and Amazon too) are on a collision course for the biggest media rumble we’ve yet seen. Movies. Music. Books. Magazines. News. They want it all. Those are juicy, high margin digital bits. And the coming of the tablet presents an incredible opportunity for the Silicon middle-men and the publishers… potentially.

But: Do consumers really want to read on their mobile devices?

Well, let me ask you this: Do you prefer Cadillacs or Steak Knives?

According to Zinio, its Android app reached 300,000 downloads in just under 60 days. Yes, yes, glossy Maxim foder certainly doesn’t hurt in that regard.

What can you do with Zinio?

Like most leading edge iPad apps, the interface is gorgeous, flowing. It invites you to click, almost seduces you, as it reaches for your wallet.

Reading on Zinio is everything we’ve come to expect. There’s pinch-to-zoom, gestures, and all that. Keep in mind, however, this is not as dynamic an app as, say, The Daily, or Wired or Popular Science. This app is, again, more in line with a digital representation of its paper counterpart. That is likely to change as the service grows. Already I’ve noticed new icons begin to appear that link to photos, and web content. 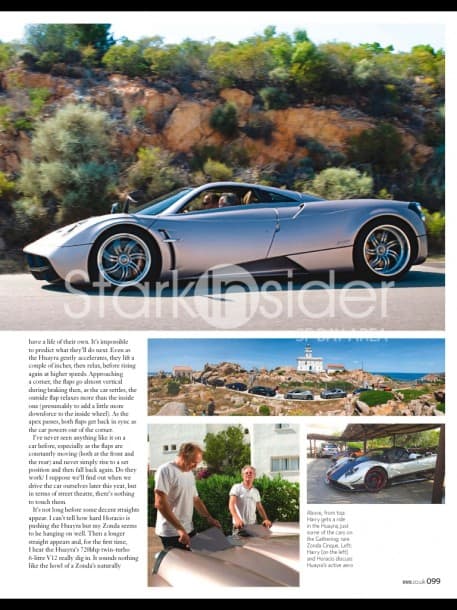 When you first load up Zinio, there’s enough teaser content to assage the wary.

EVO is glorious male eye candy. And it transforms well here. “Gathering Storm” – a bit of eye candy about the Pagani Huayra is one of many captivating examples of how well magazines work on tablets, be it the iPad or Samsung 10.1.

Like other downloadable magazines, content is stored on your device — a la Kindle — so even in the absence of wi-fi you’re not without content for that coast-to-coast flight.

It’s a hit- though the company has got to get a handle on the crashes. The app is not without occasional instability.

Otherwise, Zinio is everything you’d want in a digital magazine service. Yes, it costs. You need to subscribe. But producing content doesn’t come without cost, and the freemium generation someday will be in for a wakeup call when it realizes that having someone head out on location with an EOS Canon 60D or 5D Mark II to take slick photos, that are later processed in Lightroom and Photoshop, does not come without…. at least a free parking voucher.