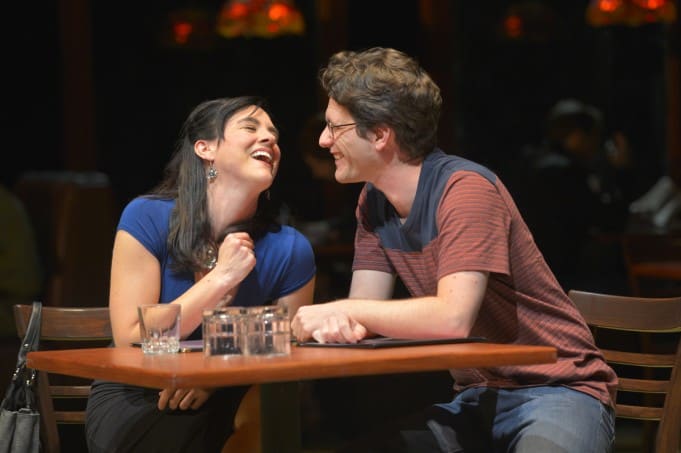 Part of scenic designer Nina Ball’s magic lies in creating places that you’ve been before. Surely you remember that dimly lit diner with the brown and yellow tile floor that has a fake Tiffany lamp hanging over each brown vinyl booth. However, you probably never spent the same amount of time in that dive as the characters in The Big Meal, a Dan LeFranc play that just opened at the San Jose Rep.

Action cycles across multiple generations, all of who convene at the diner. This restaurant setting made sense to LeFranc, son of a waitress and restaurant manager. At the outset, we see fragments of failed dates between the leading couple-to-be, Sam and Nicole, each date separated by an auditory signal. This approach makes for fast and funny action. However, confusion sets in as we see the same actor morph into different characters, and single characters played by different actors.

It’s not a stretch to believe that this confusion was intentional, perhaps as a way of pointing out that children often never get all that far from the tree that bore them. However, once you get past that first generation, characters blur and cease to be distinct. Cross talk at the table makes it unclear exactly which generation is speaking. This isn’t necessarily bad because it makes for a fast-paced evening. Do be warned though: if you’re looking for a child-free night out, look elsewhere because you’re never too far from one more onslaught of noisy children barreling through the diner.

As Nicole, Carrie Paff was particularly outstanding. One senses she had a clearly defined sense of what made Nicole tick, and perhaps even more importantly, respected her. Having earned this credibility, Paff cashes in on it in subsequent scenes when she’s morphed into the 20-something granddaughter of Nicole (now played by a different actress), complete with the clear eyes of youth, talking to her very aged grandmother.

The emotional impact of all this action ripples across the audience, particularly during the past twenty minutes when sniffles become audible as yet another character removes himself from the table, signifying that they’ve passed on. It’s almost as if once you think you finally have a sense of a character, they’re bound to die.

The Big Meal will be on stage until June 1. Summer productions at the San Jose Rep include Landscape with Weapon and The Complete History of Comedy (abridged).

Back in the USSR with ‘The Letters’ (Aurora Theatre Company)

Art of Filmmaking with Gia Coppola and  ‘Palo Alto’

I am Not a Genuine Black Man – Brian Copeland