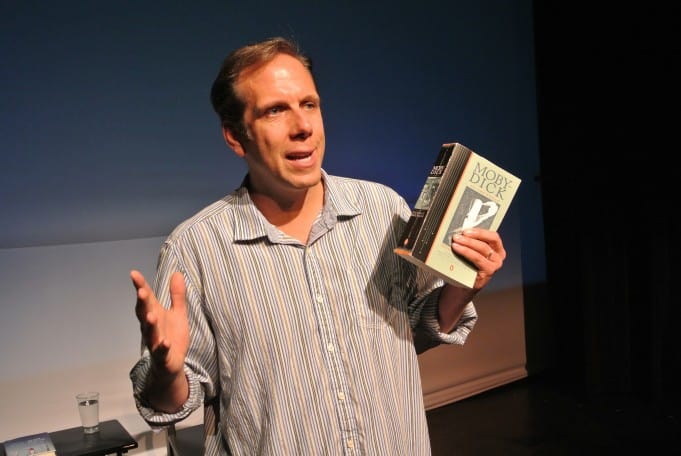 You don’t certainly don’t have to hail from the right coast to appreciate Mark Kenwards’s Nantucket, now on stage at The Marsh in Berkeley.  Nantucket may be Kenward’s story, but it feels like a hometown tale for the rest of us.

At the outset, it helps to know that long New England winters breed such an intense variety of crazy that when the first green buds emerge, you shake your head in wonderment that all your recent crazy was no more than another winter’s cabin fever.

It isn’t just the weather that makes people take crime so very seriously. On the left coast, unless it’s a national story or the more Oakland violence, all you usually get is an an half digested thread about some  California weirdness lacking context or follow-up. Absent a small miracle, like Brian Copeland’s one man show, The Scion, the news barely dents your consciousness.

Not so back in Boston where such local crime become an operatic sagas worthy of the Ring, with the daily news providing the aria and court transcripts providing the recitative. There’s a reason that the Boston Herald, which provides much of the fodder for these stories, could never exist in Silicon Valley, where local drama gets played out on different fields. If you Bostonians are smirking, just remember, you know  at least one smart person who admits actually reading the thing.

Whether it was the Chelsea King Arthur murders in the 80’s, the New Bedford pool table rapes at Big Dan’s in the 90’s (during which reporters were compelled to remind readers that Herman Melville called New Bedford ”the dearest place to live in, in all New England’), or the recent Whitey Bulger drama, these stories are as much about local consciousness as the glacial moraine from the last ice age is about the arm of the Cape. Lest there be any doubt, just remember, Mystic River is a Boston movie.

Kenward’s story – which is both more and less chilling than the aforementioned events – builds slowly. Lanky, his blue eyes take on an odd glint, as if to confirm the audience is still with him during the telling of his family’s move from Normal, Illinois (yes, the same Normal as the Christine Lahti movie “Leaving Normal”) to Nantucket, Truman Capote’s hometown.  If you’re not patient, you just might dismiss this first act as an eminently forgettable coming-of-age story, noteworthy only by Kenward’s put-on Boston accent and acting chops. Stay with it.  Your attention will pay off.

After the first act, the Marsh treats its audience to “a New England picnic dinner from the East Bay premiere artisan take out restaurant Grégoire,” which was a delicious repast, if you ignore the fact that no self-respecting New England picnic dinner would include the words “premiere” or “artisan,” and would never come from a restaurant called “Grégoire.” However, the bar is friendly, the jazz excellent, and the food more than respectable.

So powerful was his hold on the audience, the only evidence that anyone was even breathing was an occasional gasp.

Just when you’re sated, the second act begins, and you’re back on Nantucket where things are getting, um, interesting. I’m not going to be the reviewer to blow the cover on what goes down, but suffice to say that all the credibility that Kenward took his time establishing in the first act pays off. So powerful was his hold on the audience, the only evidence that anyone was even breathing was an occasional gasp.

Unlike the aforementioned Boston crime stories, Kenward’s is a first person tale. To hear such a story told in the first person is a rarity in itself, complete with plot points inextricably intertwined with the quotidian. Kenward’s a master storyteller, and he pulls this one off with the right distance on his material. Bringing performers like him to the stage is where the Marsh excels.

Kenward’s performance has a curious after effect. Comparable stories can creep you out or push pity buttons. Nothing like that happens with Nantucket. Thanks to Kenward’s very conservative use of sound and light, all you’re left with is the grey fog coming in and seagulls. Frankly, it took me right home.