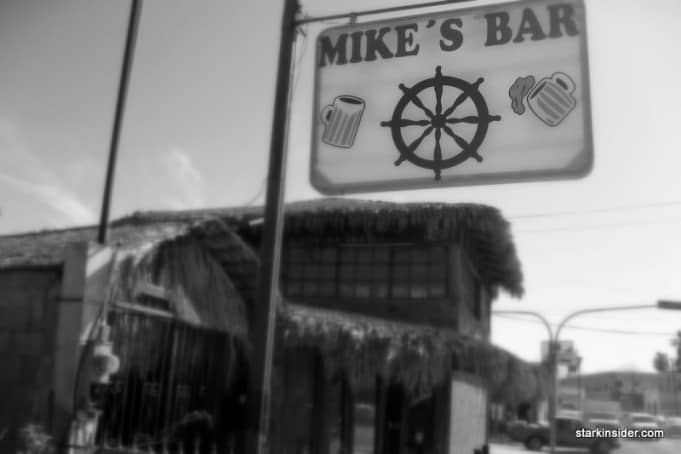 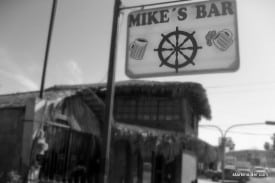 Years later, under a full moon and with a sizable thirst, I hobbled into Mike’s Bar. The Loreto Bay sales extravaganzas — those drunken pin-the-tail on the site map parties for gringos —  were a distant memory, and the luster had worn off. On this evening the streets were filled with dust, noise, and exhaust fumes. The rain had let up a bit, but puddles dotted the streets, my shoes were soaked, and I was in search of a beer while Loni and a few friends hit the shops a few blocks away. The rusted sign with its frothy steins and ship wheel beckoned.

A hip pointer injury that I had sustained a few days earlier playing hockey in San Jose wasn’t doing me any favors either. I limped and grimaced, pretending that I was really just smiling. Times like this I once again appreciated the small things in life, like being able to walk. And from that vicious body check, I still had ringing in my ears. I had Googled the symptom. Would it ever stop, this perpetual whine? Turns out, I was not alone, and there was something called “tinnitus.” It was very common among soldiers returning from military duty. The explosions and noise of their weapons could result in severe cases of tinnitus, no doubt far more severe that what I was experiencing as I stumbled into this small bar in downtown Loreto.

My memory of the events that followed is not altogether coherent.

The economy was a mess. Real estate had plummeted, and the country, and the world, were on the verge of a massive economic meltdown. That plus my less than prime physical condition had sunk my spirits; they were about as a low as I could ever remember, despite the fact that I was born, as Loni likes to remind me, on “a happy farm.” It would be on this evening in this little bar with its three-for-one drink specials and Latin disco music that I’d learn we were being watched. For what, I don’t know. That knowledge would not make my acquaintance until 2010, and, sure enough, it would lead back to Murphy Gamble in Atherton, the Nordic syndicate, and that blistering day out in San Javier. All because we decided to buy a little casa in a resort called Loreto Bay that was on the verge of bankruptcy.

I admit I was in a grumpy mood — Loni calls it Egor mode. Why on earth did we buy into this damn project with its joke of a sustainability message, and happy-go-lucky buyers looking to throw away their hard earned money into lines drawn into the Nopolo sand by a marketing team? My pick had been Vancouver for another property. British Columbia is staggeringly beautiful, the sushi was good, and, a Canadian boy like me could feel right in a place like that. Plus it was a first world country, operated with real paperwork, and locals wouldn’t keep telling me to learn Spanish. I recalled the evening when I smashed a wine glass, and cut myself.

“Screw it! Let’s sell out. Loreto Bay is a pipedream. The numbers don’t work and it’s just dirt, dirt, dirt. Why are we chasing this waste–”

“Clint, you’re acting like a spoiled child, it’s not very becoming,” Loni admonished, irritating me even further. “Plus don’t forget our web site would never be what it is today if it wasn’t for Loreto Bay.”

True enough, it was back in March of 2006 when I had written our first Loreto blog post for StarkSilverCreek. It was called “Hola, Off to Baja for Long Weekend Fun.” I cringe when I think back to it. How naive, and what an innocent time, well before I started receiving the cryptic emails, and well before I learned that our so-called Loreto adventure was really getting me into a confusing, often dangerous situation that was about a lot more than just building a home.

The memories faded as disco music thumped through my body. For a moment, the ringing was even gone. Well, there’s the answer: lots of loud noise!

Mike’s Bar was exactly that, a long bar at the center of the room, with tables and chairs spread around the edges, and a small area that could possibly be a dance floor, a performing stage, or a mosh pit even I supposed, depending on the occasion. The low ceiling either stirred claustrophobia or oozed comfort; a matter of taste. What mattered most to me was cold cerveza, gracias.

Corona, at least in my humble estimation, is what we drink in America when we’re pretending to be in Mexico. When in Baja, however, it should be Pacifico (medium), Modena (light) or Tecate (really light). You aren’t likely to find them in the Hofbräuhaus any time soon. Then again, this is the kind of beer you can down in two gulps; the Baja heat does wonders to the male appetite for rapid-fire liquid consumption. The most important thing, of course, is that it be cold. Frosty, preferably, as it is here at Mike’s.

So that was the plan then. I would stew in the back corner with a cold cerveza while Loni shopped the night away.

Contemplation arrives easily in these situations. Life either comes rapidly into focus like it does when I’m sitting in the steam room at Club One in Silicon Valley, or it flies away in a million different directions. True to form, nothing on this evening would come into focus.

Stranger, stranger in a strange land / He looked at me like I was the one who should run

My plans to drown in woe-is-me rhetoric were abruptly interrupted when a man looking as old as time, and with a vagabond look that was either right out of Les Mis or the telltale of an authentic Baja drifter, sat next to me. No greeting, but lots of eye contact, like he was studying me, this rare pale freckled specimen. I ordered a third Modena. Why didn’t he sit at any of the other empty tables, or up at the bar?

I played it casual and nodded politely. Salut!

But he simply sat and continued to stare.

Even with my hip pointer, I was guessing I could probably out-limp him to the street if I needed a semi-quick getaway. Just in case I had my BlackBerry at hand, although I wasn’t sure who I’d call or text. What would I tell Loni… that some strange man is sitting here staring at me? I know her response already: big deal, it happens all the time to me in San Francisco, welcome to the club.

I shuffled slightly, ready to head to the restroom, always an easy escape, when he started mumbling something to me in Spanish. No habla espanol I tell him with an embarrassing shrug. It seemed like whatever it was he was telling me was heated. So we probably weren’t going to talk about the San Jose Sharks.

A few fishermen at the bar look over. Okay, okay, I say and then try to calm him, “Take it easy, senor, senor…”

He pauses for a moment, then says to me in perfect, but grizzled, english, “You are the man of the rojo. You know, yes? The spine of the Baja is strong and proud. Your kind may not be, uh, may I suggest… compatible.”

At this point my patience is exhausted, my mind fatigued beyond belief. All I wanted was to sit quietly in the back, people watch and dull my pain. I get up to leave. My hip protests greatly, and spikes of pain again paralyze the left side of my body. Then he says something that stops me cold.

Only in Loreto could this happen. The odd, the unplanned and more recently the unwelcome were par for the course during our travels across the peninsula.

I nod slowly, and look around. A young couple is drinking tequila shooters at the bar while an older couple dances slowly, which is decidedly odd considering the upbeat Latin music now playing.

“I see your chica is a pretty one… but Gamble is of more practical interest.”

“Call me Cortez. You don’t know me, but you will.”

He leans back as if to take stock. All I could do was sit in disbelief and listen… I was hanging on his every word.

“You perpetuate the American scam, you and your web site that spreads the lies, the untruths, the sick propagandas. Well, now my friend, I have a favor. You can make it right. TSD is irrelevant to our concerns here, yes? SB should be of interest to Mr. Gamble.”

Every time he says Gamble, I’m sure I noticeably flinch. I’ve been pitched before in an attempt to get to Murphy’s funding models. With his connections to major VCs and high net worth individuals across the valley he could easily pull together millions for the right deal. Once he had pulled together a $15 million fund on a napkin over breakfast at Hobees in Cupertino. It lead to a minority investment in a company that would create a critical data bridge programming algorithm that produced a geo-location tracking service used in some of today’s social networking programming interfaces. Later he would sell it to MySpace and walk away with a 300% return for him and his investors.

This, however, would mark the first time I was being pitched in a Baja bar by an apparent bohemian.

So-called Cortez hands me a business card. He tells me that he needs me to inform Gamble about the Scorpion Bay project, and that the “syndicate” requires a partnership. That I can help persuade my friend about the upside in the facility which would help a Danish organization develop the western side of the peninsula.

“Uh, well, I appreciate you bringing us – I mean Murph – this… opportunity,” I remember telling him as if almost out-of-body. “But why don’t you just call him directly, or, better yet, email him the details. This might be more effective.”

“Diablo chico,” he mutters. “Business can be easy or it can be, not-so-easy, yes?”

Then he points to the street. “See there? That’s Andres.” I look across Calle Hidalgo and see what looks like a teenager smoking and periodically looking over in our direction. “He is here to make sure the plan is all going to work out good for us.”

While he was talking, I was fumbling underneath the table, thumbing a text to Loni on the BlackBerry:

“watching us. scorpion. another gamble mess… we need 2 get out.”