This is Part 3 of a special Stark Insider travel feature by Clinton Stark, who spent 10 days in Loreto, his latest adventure in the small fishing village on the coast of the Baja that stirred (but did not shake) his soul. Parts 4 and 5 will be released tomorrow and Friday.

If these walls could talk, they’d ask how you feel about dust, dirt and drifting Baja sea salts. Amathophobians, run. Or they might tell you a story or two about “Mexican engineering” — the kind you would never see in Germany or Japan. Owning a home in the Baja, specifically Loreto, everyone’s favorite little fishing village along the Sea of Cortez, requires an understanding of several principles.

#1 – When all else fails: Margarita

Owning a home here, nestled between the De La Giganta and the wonderful blue sea to the East means leaving your American (or Canadian, or European, or Asian… or Newfoundland) sensibilities back at LAX, with the pink pajama suits and never-ending Johnny Depp/Angelina Jolie movie posters (The Tourist… you might’ve heard of it). It’s not that they don’t have Diet Coke. They do. Or Internet access. They do. Or friendly places to eat. They do. Or nice rental cars. They do. Or even trendy espresso shops and bakeries. They do. It’s just that things take time. You will eventually be satisfied — probably thrilled — with the result, be it a fix to your home, a new piece of furniture, or a piece of long awaited official paperwork. Just be prepared to wait and to smile. There are friendly people here, but this is Mexico. It’s not our culture. And I keep telling myself I must learn Spanish. Okay, early resolution: 2011! Meantime, Margarita.

#2 – When you leave your Loreto home, you’ll immediately want to return

At first I didn’t want to head down to Loreto for ten days. I almost convinced Loni, and we came within a hair of canceling the trip.

All I could think of was the dust, the construction, the lack of good wine.

Then I realized that I was acting like a spoiled boob.

After twelve years in Northern California, had I become what all New Yorkers so readily accuse us of being? Soft! I’m a softie!

It could be true. Over the last 12 months, I had been rear-ended in a car accident, torn my MCL in a hockey game, been rushed to the hospital for chest pains (I’m seizing!) that turned out only to be a muscle cramp, and continue to lose day-to-day faculties such as hearing, sight and critical thinking.

Plus, I wondered how on earth we could keep Stark Insider running with an Internet connection that was the equivalent of average dial-up speeds from 1991.

Well, all worries for not.

When you land at LTO, that first breeze — like the first swig of Diet Coke, Blue Moon or Chateau Ste. Michelle Riesling — is euphoric. Why is that? Maybe it’s because there are about 32 million less people here, hardly any cars (although the ones that are here are not likely to pass the DMV smog test anytime soon), and you just know you’re going to be surrounded by lots of quality people – the locals, fellow home owners, shop keepers.

Then there is the landscape.

It’s at times breath-taking, but at others quite nomadic. I know it’s different. Downtown Vancouver, for example, can be just as (if not more) astounding with its stellar views of Whistler. Same when you gaze across the Golden Gate Bridge to San Francisco on a foggy day, with the Pacific Ocean below. There are a lot of beautiful places on earth, and chances are many are at home. So I guess with Loreto, yes, it’s ruggedly stunning in its own way. But most of all it’s different from home, and that’s probably one reason why it makes for a satisfying getaway.

So on the last day of our November vacation, we found ourselves doing what my Mom always does, and it puts a smile on my face: “Where did the time go… I can’t believe we’re headed home already.”

You know how there’s no such thing as Canadian or British food, per se. Well, I think it’s safe to say we can apply that logic to Mexican engineering. Don’t get me wrong, the homes here are full of character, and we love our little casa. But, just because it’s made of concrete “Perform Wall” (many of the earlier Loreto Bay homes are made of Adobe brick, an altogether different story) doesn’t mean it is better than a North American home built using drywall and two-by-fours.

No use getting up in arms (see #1 above) about minor things that will smooth themselves out over the years. “Charm” is the word. 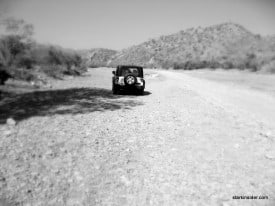 Don’t come to Loreto for blissful beach time. Yes, you can have that here if you like. The real idea is about the action. Activity. There’s so much to see and do here it’s almost a crime not to get out there and live a little. Like the time a guide drove us across the desert, up and over the Sierra de la Giganta mountains to reach the small town of San Javier, population 142. I’ll never forget that morning.

It was a blazing-to-barnyard scorcher, probably around 100 degrees, but with the humidex my pale Canadian skin was telling me I was cooking like a moose stuck in a microwave.

Our little white jeep looked like a tiny Tonka toy against the mountain range.

When we finally did arrive at San Javier, I was bathed in sweat. The ride is at times nerve racking, the dirt road weaves precariously, right next to straight drops, with no guard rails in sight. I sought out the nearest cantina. Cerveza!

A scene right out of a film, a broken down Jeep sat in front of the mission and the poor sod was working on the engine in the blistering heat. 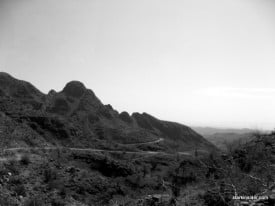 Loni and the guide decide to go explore the region while I hunt down that beer. I finally found a small hut, behind what looked like a long-forgotten junkyard (then again, do we ever remember them?).

Now, I’ve never told anyone this story, no one. Not even Loni. Admittedly I feel somewhat apprehensive even writing about it, which is why I prefer to include here in this post a little further down from where I expect most will see it.

And, yet again, like the time I was semi-conscious watching Loni on the beach while wading in the Sea by Coronado Island, my head was ready to explode. Ever have that feeling where you’re slightly dizzy, and dotted lines appear out of your peripheral vision? Regardless, I needed to sit and drink a beer. 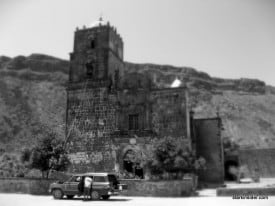 So I find this makeshift bar top. No one else is around except for this long-haired blonde guy — get this — dressed in a suit. A suit! It’s 100-plus degrees and I’m thinking like Sean Connery at this point. You must be joking. Here’s the other part. He speaks with what sounds like a Nordic accent. Maybe Swedish, I don’t know. Ok, so this was not your normal taco stand. I didn’t care really. So I ask for a beer, and he serves up a Heineken. No Pacifico? Wow, interesting.

But all of that pales in comparison to what happened next. I admit, I began to feel somewhat nervous for some reason, and I had lost track of Loni and the guide long ago.

Interesting that he knows. Well, down right freaky really. I nod slowly, then chug half the beer in what feels like one of the most triumphant and refreshing moments of my life. I’m already asking for a second as I finish it moments later. 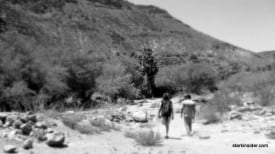 So he pulls out a brochure, and shows me what looks like some kind of club, maybe a spa or something.

I tell him no. He proceeds to tell me that he knows about our “little” web site that “propagates the American scam,”  and that’s he been watching and has something very important for me to do. It could be dangerous he says. Are you kidding, me?! Remember, I’m soft. I’m soft. 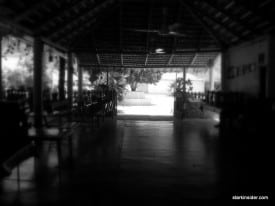 Turns out we have an investor friend in common, in Atherton in Silicon Valley. He wants to arrange a wire transfer that he’s (allegedly) arranged to fund the next phase of a complex he and his “syndicate” of partners are building. The problem is a Baja official has not approved the zoning. But he tells me the guy only claims to be an official, and that he’s really not.

Here I am, on my second beer, wondering where this conversation is going, how I ended up here, and realizing there is no hope in hell I can get an AT&T signal out here. At times like this I wonder if it’s really worth putting ourselves out there on Stark Insider… the videos, the stories, the personal exposure. The risks.

When he pulls out and shows me a photo of Loni I almost pass out.