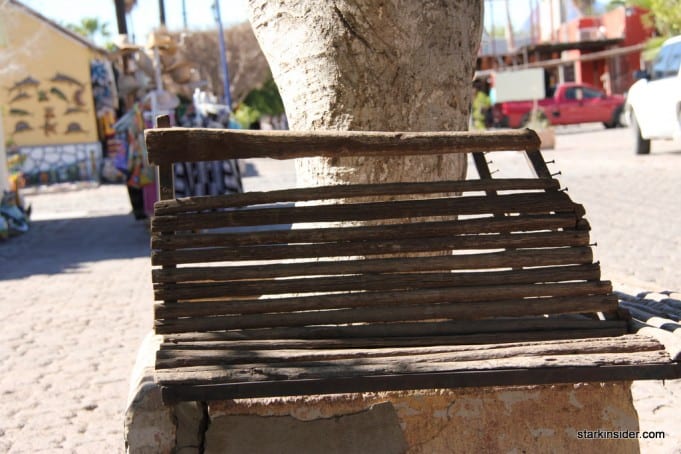 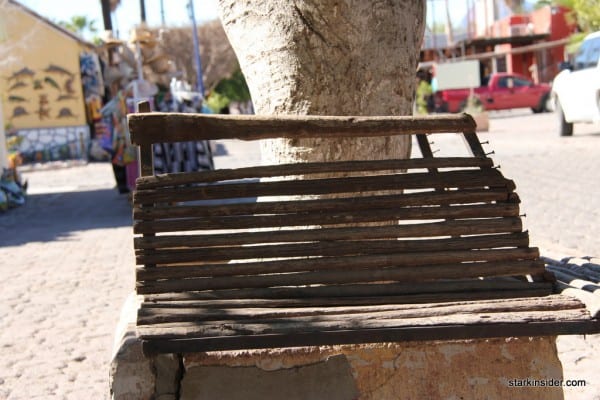 This is Part 2 of a special Stark Insider travel feature by Clinton Stark, who spent 10 days in Loreto, his latest adventure in the small fishing village on the coast of the Baja that stirred (but did not shake) his soul. Parts 3-5 will be released each day this week.

The history here in Loreto — the little town that could — is palpable. You see it everywhere. Our Lady of Loreto, the Baja’s first mission (Misión Nuestra Señora de Loreto), sits at city center. Next to it, the historic El Camino Real road begins, and winds all the way up the Baja across Southern California, through San Jose (where it’s home to car dealers, Sushi houses, Taco stands, and even some Silicon Valley start-ups) before ending in Sonoma, smack dab in Northern California wine country.

It can send chills down your spine.

Imagine: the year is 1697 and Jesuit missionary Juan María de Salvatierra establishes the “head and mother” of all Spanish missionaries. I’m guessing he liked fish. If they plan a sequel to The Mission (the 1986 film starring Robert De Niro and Jeremy Irons) they could very well shift it to the Baja and start the story at the stone church. That today you can still walk through it, touch it, and absorb the rich heritage surrounding you here in Loreto is awe-inspiring. 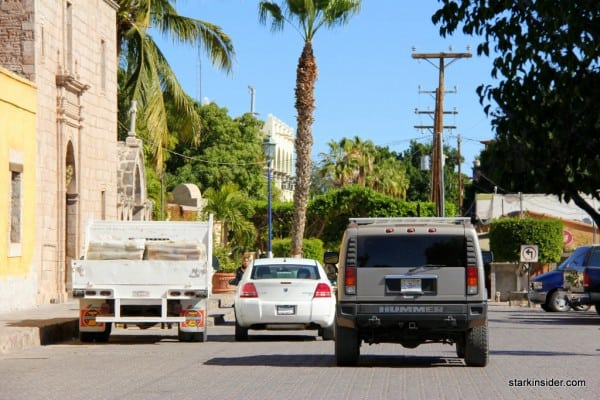 But then a Hummer H2 bustles down the tiny, bumpy (but beautifully re-finished) streets and you realize that times have changed, even for a sleepy fishing village of 11,000 (or so) people.

Over the last four years, I’ve been to Loreto at least twice, sometimes three times, annually. Ironically, although change here can be characterized as watching grass grow, or simply “Mañana”, a lot has changed since 2006.

As I mentioned in an article yesterday (Loreto, Baja Part 1: An on-the-ground report from Loreto Bay), there is a nouveau Loreto emerging, driven by a new generation of entrepreneur. True, they’re likely less concerned with Jesuit history and culture then with capitalizing on the growing tourism and appetite for resort living, but nevertheless they bring a level of business sophistication possibly not seen by the town before. Mind you, the siesta, that famous Mexican period in the afternoon where naps and relaxation reign supreme, are fully intact I can assure you of that.

With its large shiny new arched terminals, LTO, the Loreto airport, is a hugely symbolic, and functional demonstration of this change. The original palapa version with its laughably (albeit charming!) arrival area still sits off the tarmac, another artifact worth celebrating. When we arrived for our 10 day vacation earlier this month, we were in awe of the terminal which, at least up until the latest renovation, might have even given a smaller airport in Silicon Valley such as SJC / San Jose a run for the money — well, ok, almost, but still it’s darn impressive work.

Gazing at the soaring ceilings and expansive hallways, Loni and I both agreed the thing was overbuilt, but for a reason: Loreto is growing, and the Mexican Government (and it’s tourism development arm Fonatur) see it as a shining example for the future of what’s well and good about vacationing and owning real estate here. Now you can travel 7 days a week via LTO, which even less than a few years ago was not possible.

Where are you from?

Look, I try to be positive. On Stark Insider, we tend to celebrate the good stuff in life — be it the latest show in San Francisco, or a new wine release in Napa, or an interview with James Franco at the Mill Valley Film Festival (yes, plug) or the latest lust-worthy gadget — but one thing deserves to be called out. And that is the overbearing, aggressive, and, ultimately, annoying Villa Group timeshare sales guys that cloy and get in your face. Without even seeing them, you can feel their presence bearing down on you. Sales pitch imminent… again. 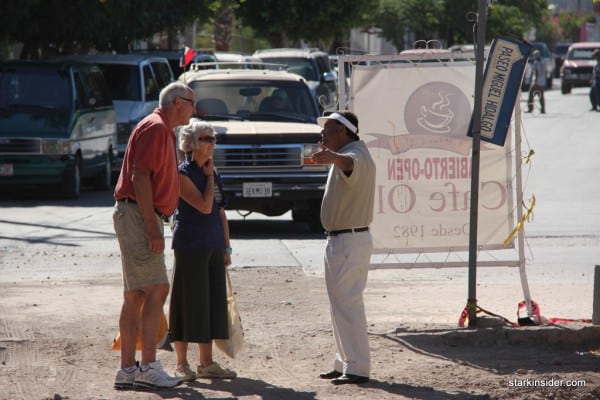 I don’t blame the guys out on the streets trying to earn a living. They’re doing their job. I blame the company’s management for employing tactics that are completely out-of-touch with today’s buyers and the Internet economy. Like white alligator shoes and used car salesman, it’s time for something new. I know they’re trying to move product, but trust me, it’s more of a turn off then anything (although, it must work, no? Otherwise why employ the ruse?).

UPDATE (12/2/10): I found the flyer that was handed out to us that I couldn’t find when I originally wrote this article and wanted to provide a quick note on how to do it right. As Loni and I walked back from the Malecon, we were again approached. This time it was for Arturos Sport Fishing — a respected local operation. But unlike the pushy timeshare technique Arturos simply asks us if he may give us some information. We said yes. So he hands us a brochure, he smiles, and we’re on our way… no under-handed attempts to make phony small-talk. It left me with a positive impression of him and his buessiness, and low-and-behold here I an now reading the flyer and talking about Arturos…!

But it’s a minor point, and not uncommon to many tourist destinations, so why, I ask myself, do I get side tracked on these things?

A mystery awaits up in those mountains that seemingly surround Loreto. As if watching, waiting, they loom. What exactly is that feeling I get when I’m walking downtown, that there is an untold secret? Like the expanse of the desert outside of Las Vegas, stories remain to be told, only these are contained somewhere in the rugged ravines, the sun blasted arroyos… I may never know, but one day I will find out. 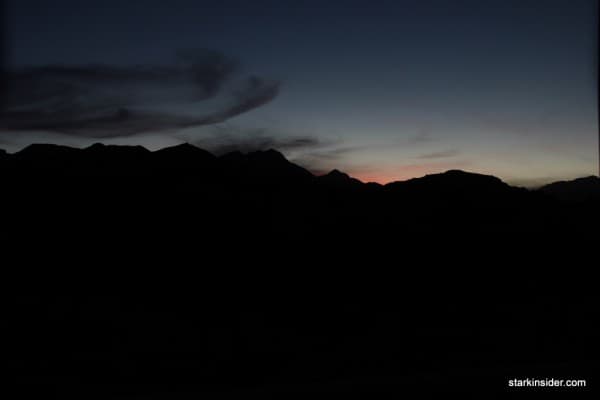 It’s a Hammer and Nail, and Fishing Economy … but it’s evolving

I don’t have hard fast numbers on the economy here in Loreto (if someone has GDP, income, growth numbers, etc. I’d be very much appreciate to know of them), but I don’t think it would take an economics laureate to figure that it’s very much a labor-driven, blue-collar economy. And it, like most Mexican economies, is cash driven.

There are no less than three (maybe more) hardware stores alone in Loreto. The only franchise in town is a an impossible-to-miss, large blue Sherwin-Williams paint store. New homes need paint. And, corollary: existing homes need paint too. The Baja climate with its scorching sun, sea salts, strong winds, and hurricane season is no friend to your home’s exterior should you own or ever decide to buy one here.

Considering its roots as a fishing village, and a noble role in expansion of the missionary system, Loreto is quite progressive when it comes to the arts, reading and, obviously, hand crafts. As luck would have it, on our last visit we enjoyed strolling through an art exhibit celebrating the women of the revolution. Could it be here that Quentin Tarantino finds inspiration for Kill Bill IV? 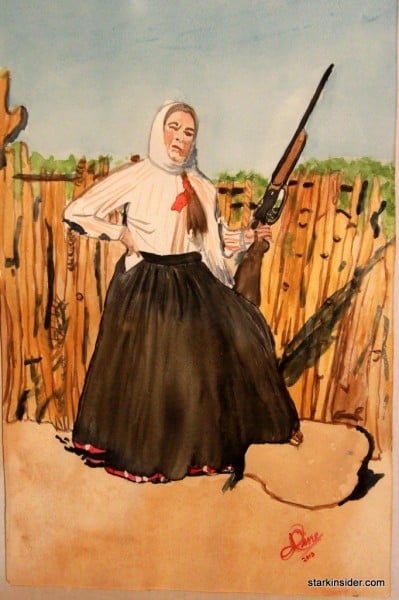 One of the most glorious sights in all of Loreto (and there are many) is the morning sun reflecting off the Sea of Cortez by the malecon, the town’s boardwalk. It’s not to be missed. Park benches line the walkway giving you prime time viewing of what surely has to be one of the most awe-inspiring vistas. Was it here, I wonder, that Jacques Cousteau called it the world’s aquarium? 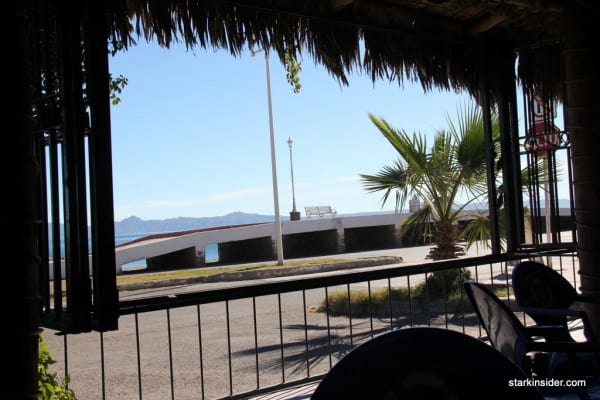 Many restaurants and hotels line the Malecon. On our visit Loni and I once again stopped in to the always amiable Las Mandiles for a late breakfast. The coffee was piping hot, and our eggs came Mexican style which is to say with lots of sauces (green and red) and plenty of beans, tortilla and cheese. Little Kazoo momentarily perched on my shoulder to remind me of a place called the gym. But scurry off I say, this is vacation time. 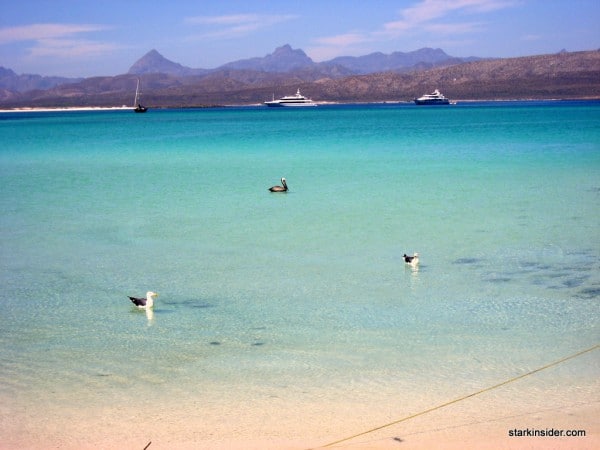 Coronado Island, like the Baja and like Loreto, has a way of seizing your soul. Maybe it’s the heat? But standing here, wading in ankle high water I could swear that I’ve seen mysterious dark figures — nomad-like — scrambling in the trees, somewhere in the bushes and trees a few meters back from where Loni is sitting on the beach, swiping infinitely on her iPhone. Suntan lotion burns my eyes, so I’m the first to admit my vision is slightly blurred.

And that scorching sun can do wonders to my pale, freckled skin, not the least of which is to bring on migraine-size numbness.

Look, sure you can’t believe everything you read, but I’m telling you (and I hope to convince you over the coming weeks and months) there is more here than meets the eyes.

The People of Loreto

Ask anyone about the people of Loreto — the shop owners, the kids playing in the streets, the hospitality staff, the fisherman enjoying a frosty one at Mike’s Place after a long day — and they will tell you they are among the friendliest, most proud they know. And that best sums up the little town of Loreto. Optimism pours onto the streets thanks to the passion of the people that call it home. I know there are some who shun us, the gringo tourists who flock into town wearing loud shirts, and (at least in my case) goofy sandals, but most are embracing the evolution of the town. 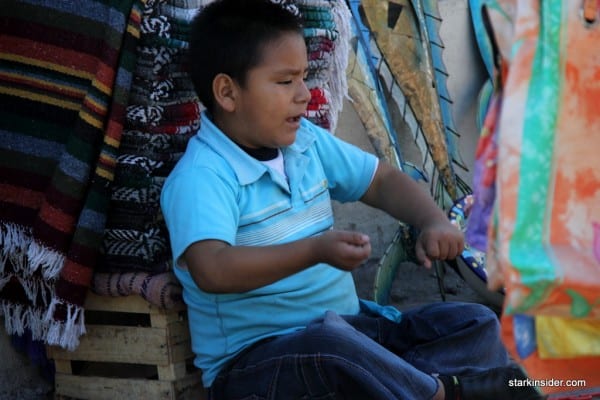