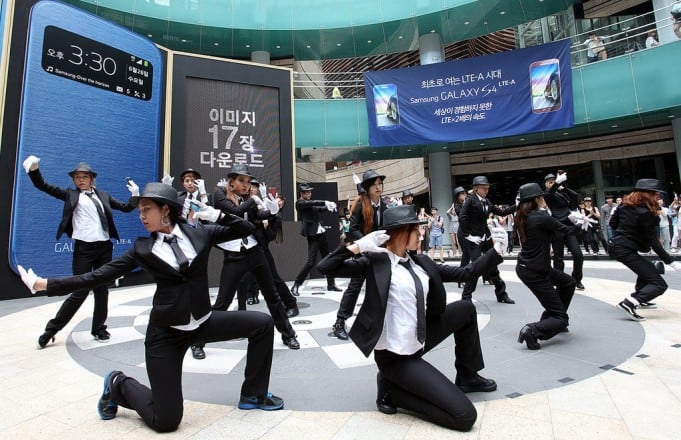 With a lull in both Google and Apple’s release cycles, Samsung is about to take center stage.

Google typically announces major updates to the Android operating system and unveils new tablets at its I/O developer conference in May; followed by refreshed Nexus (Google should kill that brand) devices, in Q4.

Apple too employs a fairly consistent rhythm. First half of the year is all about the iPad. Back to school is the MacBook. And just in time for the holidays, the iPhone hype machine ratchets up a notch or two (though it’s already started this year with word that Apple will go bezel-less… where have we heard about this before?!).

That means for the next several weeks all eyes will be on Samsung.

Based on the past, we can expect the Galaxy S5 to be unveiled during the Mobile World Congress (MWC) trade show next week in Barcelona. Any time Samsung updates the Galaxy S it’s a big deal. Not just because it’s a cutting edge device with all sorts of rigmarole. Unquestionably Samsung is an innovative company and it tends to use the S-line as a showy platform. Braniacs are us; only Google (Glass, Google Now) can rival the South Korean juggernaut when it comes to consumerizing mind-blowing tech these days. So yes we expect lots of glitz. The S5 will surely be a demo beast. But there’s more to the story: This is the first company to (have the gal to) challenge Apple for almighty supremacy in the race to satiate our mobile lifestyles. All of a sudden–circa 2012–the default smartphone purchase was not necessarily an iPhone. You would not automatically be laughed out of room if you mentioned “Galaxy” or that you actually quite liked a larger screen, and that Android widgets were quite cool (yes, aren’t they?).

So, enough with the backstory, what do we (think we) know about the Galaxy S5?

Go big or go home I said in reference to tablets this year – that we could expect the tablet market to follow the laptop market in the early days, and begin to see larger screens to help fuel sales growth. So too I suspect with phones. Word is Apple will increase the screen size with the iPhone 6. Google upped its Nexus flagship (courtesy OEM LG) to a 5-incher. Makes sense then that Samsung would try to stay one step ahead. Expect a 5.2-inch display.

Smash or trash? Smash. More of us use our phones to browse the web, read articles, watch videos. I suspect the line between larger smartphones and small tablets will continue to blur. Phablets used to be a punchline. That is, until Samsung sold a gazillion Notes (with 6-inch screens!). Some will still prefer easier one-hand control – for them Apple, Google and Samsung already have, or will need to have, alternatives. For most, though, bigger is better.

Apple was first when it comes to a fingerprint scanner. The iPhone 5S has one built into the home button. It can be used to unlock the phone. Expect Samsung to match Apple, and include fingerprint reading technology with the S5.

Smash or trash? Trash. I’m not a big fan of unlocking gimmicks. Remember the face unlock? Sure, we tried it a few times, showed our friends. Cool! Then we realized it was slow, error prone, and not nearly as convenient as just using an unlock code or pattern. Same thing here.

Galaxy S5. Next week. At MWC in Barcelona.

Smash or trash? Smash. Samsung has the limelight. It also gets the jump in 2014 on Google (Moto X is already looking dated) and Apple (the 5S was an incremental upgrade).

HD is so 2008. Now that we’ve ditched our DVDs, and are just about through eBaying our Blu-Rays, along comes 4K, aka Ultra HD. Essentially it’s 4x the resolution of HD. On big screens it’s a beautiful thing. But do we need it on our phones? Probably not. Will that stop companies from packing as many battery-draining pixels as possible into consumer devices? Probably not. I don’t have a lock on what Samsung will do with the resolution, but expect at least 2K, maybe 2.5K resolution – or somewhere thereabouts.

Smash or trash? This one’s a toss up. I appreciate not being able to see pixels when reading text on my phone. At some point, though, the trade-offs–less battery life, slower overall performance–aren’t worth it. How much resolution is enough? 640K ought to be enough for anybody. Am I right?

Would Samsung dare to release a version of the S5 running an OS other than Android?

We know it pines for its own platform – to control its own ecosystem without Google. Co-opetition has been mighty beneficial to both players. But both lust for world domination (disguised, of course, as attempts to solve world hunger).