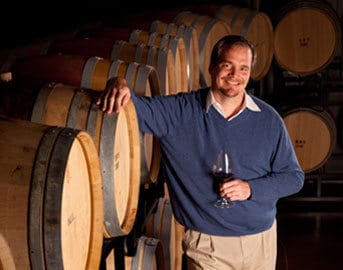 “I feel that the people that rate wines, most of the time, are not understood.”

That’s winemaker Jean Hoefliger of Alpha and Omega Winery. He’s one of Napa’s best, so when he speaks I listen–well, that plus he has that suave accent that makes him sounds immediately likable and sophisticated.

Hoefliger calls Robert Parker, whom he’s been tasting wines with for ten years, a “great taster.”

And on the matter of ratings and personal preference: “The only way to go about this particular system is to find a person that you relate to and share the same tasting profile,” he continues. “For me that’s the great advantage of the rating system.”

He makes a few other interesting points in a 90-second video “Insider View: Robert Parker, Points, and Critics” which is worth a view if you enjoy tracking the topic.

There’s a perpetual debate as to the importance of points and critics in the world of wine. You can read about it on web sites, in the depths of wine forums, and on social media. At least twice a year it becomes a raging thing with both sides weighing in with increasing vigor.

As seen from the “power brokers,” “keepers of the flame,” and “guardians of the gate”:

Points matter. Consumers need guidance. Without a score, they won’t know which wine to buy because they will have no idea which wine is best, or how wines relatively compare for a given price point. Critics taste thousands of wine each year. Therefore their palates know best. Sure, consumers can arbitrarily decide whether they like something or not. Critics, however, have vast amounts of experience. They are tastemakers. They can tell if the grapes were overripe; if the balance is right; if the acidity is too high. In short, peer-to-peer reviews can only be trusted so much. The critic is, ultimately, the bearer of truth.

As seen from the bastions of social media, the score non-believers, the skeptics:

Points used to matter. But not anymore. We are no longer living in a world dominated by just Wine Specator and The Wine Advocate. The rise of social media has leveled the playing field. Sites such as CellarTracker are becoming more influential. Consumers actually trust online “friends” more than they do the old guard. And don’t even get me started on the farce that is the 100 pint wine system. Pfft. We–especially Millennials–prefer stories. Or at worst letter grades, badges, and infographics. So critic, please just go away already. This is getting embarrassing.

There’s truth in both arguments. And reality proves that both are still, at least in part, correct in today’s wine market.

If we are comparing the 100-point system, for instance, against social media in terms of ability to ring up sales, then we should look no further than the cash register.

Do critics matter? Ask any restaurateur in San Francisco about the “Bauer Bounce.”

Look at the major wine retailers, like Costco, Bevmo, Walmart, Target – more often than not you’ll see “shelf talkers” referencing a Spectator score, or a Wine Enthusiast score or a Robert Parker stamp of approval. Why? Because the consumer ultimately values the experienced voice of authority above anything else. Yes, I know, boutiques generally do away with all that. But if we’re talking about the mass market, where most wine is sold, then this is the reality today. That might be shifting. But we’re not seeing a lot of data or reports that support that assertion.

Still, there’s no denying that social media can definitely get someone in the door of a business–a wine shop–with a specific product in mind.

At the end of the day, I believe these are not mutually exclusive concepts.

All of them are hugely dependent on reviews to move product. And, yet, all of them–all of them–still have highly influential “tastemakers” whose opinions substantially impact the market.

Ask anyone in the film business what it means to get a positive review from Roger Ebert (and his ongoing posthumous brand).

Got a positive review in the NYT for your book? Let the good times roll.

Ask any restaurateur in San Francisco about the “Bauer Bounce.”

Do these kinds of critics have heft? Yes, yes and yes.

But look at Yelp. That mobile app is a terrific illustration of crowd-sourcing that works. When I land in a city I don’t know that well, say Vancouver, I’m not going to sit down and read the last twelve months of reviews in a newspaper to find the best sushi spots. I’m doing one of two things (or usually both): I’ll pull up Yelp and look for 4-5 star reviews (rare), or I’ll Google “Best Sushi Vancouver.”

Same for the reviews on Amazon or BH Photo Video where I buy a lot of my camera gear. These social review systems, though far from perfect, for the most part work extremely well.

Notice that sites like IMDB (film), Rotten Tomatoes (also film), and Metacritic (film, tv, video games) all roll up scores based on two different sources: “critics” and “users.” Why do they do that if the critic is a dying breed? Well, it’s because the critic is not a dying breed. In fact, the argument could be made that as the world becomes increasingly noisy there’s an increasing need for tastemakers to rise to the top. That way we can align our preferences with the people we trust, and people who share similar interests and tastes. In the world of tech, Robert Scobble is a good (though overexposed) example, especially when it comes to Google Glass, start-ups and bleeding edge gadgets. So too is Kara Swisher, but for Silicon Valley news. Locally, here in San Francisco, for theater, the people that really matter, more than any social media site or random individual, are Robert Hurwitt (SF Chronicle) and Karen D’Souza (SJ Mercury News). Their reviews sell tickets. Yes, Stark Insider theater reviews get great Google juice, and we’re routinely in the top three alongside the Chronicle and Merc. Our reviews do make a difference. But they have not replaced the traditional outlets.

I see no reason why wine is any different than a film, a book, a restaurant–all are subjective.

And because we, especially here in the U.S., love to rank things (top 10 lists!) there’s no stopping the fact that some sort of wine scoring system will continue to exist. True, it may need an overhaul; no one in their right mind would dispute that. After all, it’s really a 15-point scoring system. Seldom do we see reviews of wines under 85 points. We may argue that it’s ridiculous to assign a number to a wine, but in the end the consumer wants to know what to buy, not a story–at least not at the point of sale. Wine scores matter because, ultimately, it’s ingrained in our culture.