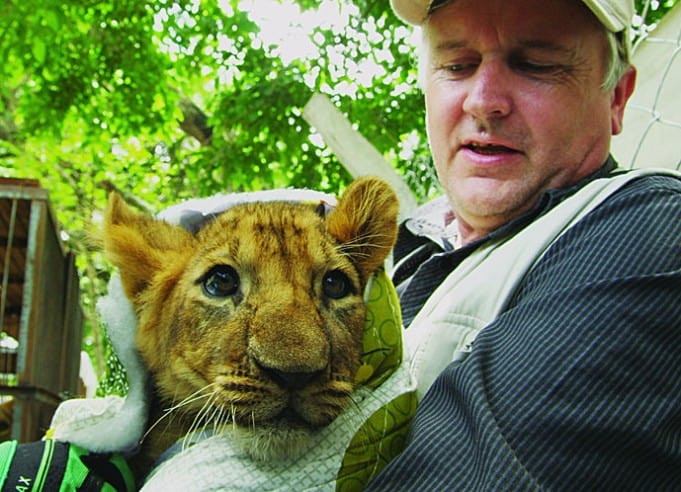 “The human race should be completely ashamed of itself.”

Should animals be kept in captivity and used in circuses?

Animal Defenders International’s (ADI) response is obvious and emphatic. Not content to merely take the fight to the Internet, the non-profit activist group takes on what may well be “the world’s most ambitious and daring animal rescue ever” (Carol Harada). This is the documentary that captures the dramatic mission up close.

Featuring pounding music, sound effects, and pulse-quickening editing, Lion Ark is far from your conventional talking head documentary. When the split screens appear early on–showing devastating clips of animal abuse–I thought that this might be the style Danny Boyle might employ.

The film follows ADI as it goes undercover to Bolivia. Here it plans and executes an intricate plan to rescue circus animals. The incredibly complex logistics sees them transporting the animals to the “Lion Ark” before eventually arranging to get them, some how, some way, to Denver, Colorado. There’s plenty of backroom dealing–including one scene involving major air lift which is negotiated as if sparring over a used lamp at a garage sale.

Despite having the most animal circus laws in the world, we’re told, almost every single operation refuses to comply with the law. If the laws can’t be enforced, then they’re useless, says one activist.

Lion Ark is through and through entertaining, and at times, yes, sad. Most uplifting are the striking shots of these magnificent creatures. Even sans Ang Lee CGI I was reminded how scary, beautiful, and large these animals are in real life.

There’s some quirky touches, like when a man comes out of nowhere dressed as Zorro, only to fade off into the distance. Bob Barker also has a cameo.

“People sometimes ask why bother about animals, when there’s so much human suffering. But it’s not a choice of one or the other.”

This documentary might win the award for most cuts per minute. The (first-time) filmmakers grab you from the get-go and relentlessly refuse to let your interest wane. Thankfully some of the caffeinated tempo in the first half, eases toward the end, as the human/animal interest story blossoms.