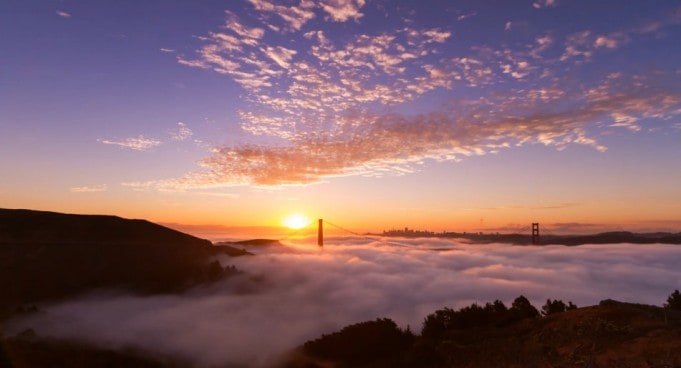 There’s no shortage of beautiful photos and videos of San Francisco. Yet here’s a short film that manages to stand out. ‘Adrift‘ caught my eye the other day.

By chance a filmmaker friend sent me a link to the short. I was immediately mesmerized by the imagery as I played the video on the artists’ Vimeo page. Clouds flowed magically across the San Francisco skyline, through the Golden Gate bridge and seemingly, like a waterfall, into the Pacific Ocean. Together with a beautiful, haunting score (Jimmy LaValle), the video transcended the small web player. It stole my imagination for a magical five minutes.

Immediately I wanted to know how. How did he do it? How did he manage to capture such vivid imagery… and, of course, what camera did he use?

Turns out, like a lot of Vimeo users, photographer/filmmaker Simon Christen, who calls Adrift a “love letter to the fog of the San Francisco Bay Area” is more than happy to share. You can read his inspirations for the short, along with some explanations of the time lapse process on his Vimeo page, which now has over 900 comments.

Though this looks like a “film”, it’s actually a series of time-lapse  photos captured using a high resolution format known as RAW. Most professional photographers shoot in RAW (as opposed to more common formats such as JPG) as it give them latitude to later adjust exposure and make creative edits using software such as Adobe Photoshop without compromising quality. For each of the scenes in Adrift Christen would wake up at 5am and head up to the Marin Headlands. There he’d let his camera sit for 2-4 hours, capturing photographic stills, typically every 2-10 seconds. He would do this over a two year span to achieve the result. Incredible.

Technically all films are a series of image (“frames”). Many films are shot at 24fps (frames per second), meaning there’s 24 individuals images for every second of film. Super slowmo, frequently used for dramatic effect in sports and music videos, is often achieved by recording more frames per second, typically 60fps.

And for those DSLR aficionados, the cameras used: Canon 7D and Canon 40D.

Stumbling upon Adrift reminded me again of the differences between video hosting services. YouTube remains the Wild West. Anything goes. Cats, aliens, soccer balls to the crotch. Vimeo, on the other hand, caters to a passionate filmmaking community, pros and amaterurs alike. It’s here you’re likely to find beautifully-made films, learn about filmmaking itself, and, as is the case with Adrift, encounter true art.

As serendipity would have it, Adrift made it into the Mill Valley Film Festival. Though we’ve been previewing MVFF here on Stark Insider, that we stumbled across this striking short was a complete, utter (and very welcome) fluke. Seeing it on the big screen will be a real treat. If you go to MVFF look for it to screen before the feature Finding Hollywood on Oct. 5 and 7.