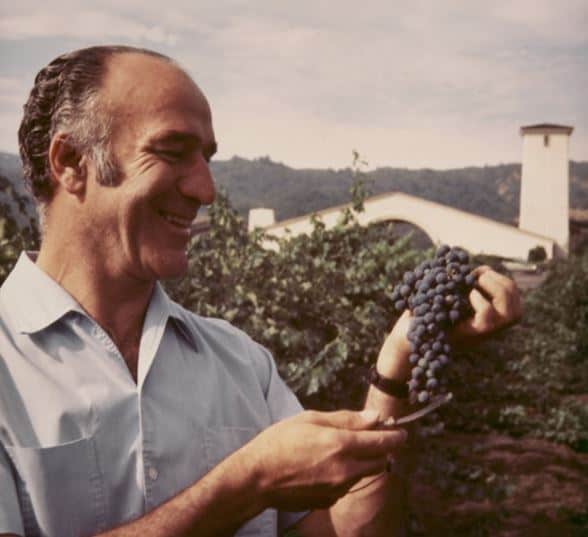 Robert Mondavi would’ve celebrated his 100th birthday today. It’s impossible to envisage the U.S. wine industry–and California wines in particular–coming this far without his influence. A legend. An icon. A good friend. There’s many words people use to describe the gregarious, and remarkably generous man.

I never met him. Though I did have the good fortune of meeting, and interviewing Margrit just last year at the winery. She’s a hoot, and still full of energy – and stories!

There’s several interesting (and no doubt random) things that come to mind when I think about Robert Mondavi, the  winery, and Napa in general.

First and quite interestingly, the winery is relatively understated by Napa standards. Unlike many of its neighbors, and even other properties towards the coast, over in Sonoma, you won’t find a large Downton Abbey-like castle here. Nor are there garish columns, velvet rooms, or discotheques. Instead, quiet taste is the order of the day. Artwork adorns the grounds, testament to Magrit Mondavi’s support of the arts and local artists. But don’t confuse that for a lack of humor. “Welcoming Muse,” a statue of a nude woman crafted by Henry Waddel, greets visitors. If you go, that’s most definitely a classic Instagram moment.

Then there’s the summer concert series. Yes, a lot of wineries throw parties and host various performers; but the folks at Mondavi seemed to have perfected the formula. Each summer a bevy of musicians make their way onto the outdoor stage. It was there, on a gorgeous Napa evening, that I was able to film Chris Isaak a few years back. It was a relaxed, pinch-me-this-is-too-cool kind of event, what with the Napa Valley as the backdrop, and the sun setting over the hills.

But this is really about the wine, though, isn’t it?

And the name you need to know is Geneviève Janssens:

Under Geneviève’s direction, the wine operation is in good hands. I’ve been tasting wines at Mondavi for the last thirteen years, with special focus over the last four with the birth of Stark Insider. I fondly recall an extraordinary four vintage tasting over dinner, and then another time a panel featuring outstanding wines (Tor, Paul Hobbs, Alpha Omega, Cliff Lede, Provenance, Schrader) made from grapes sourced from the To Kalon (Greek for “highest beauty”) vineyard located on the estate. The To Kalon vineyard was one of the primary reasons why Robert Mondavi chose the location for the winery in 1966.

Some of Robert Mondavi’s favorite places in the Napa Valley included the Oakville Grocery Co. and French Laundry, where he and Margrit would dine on Valentine’s Day. 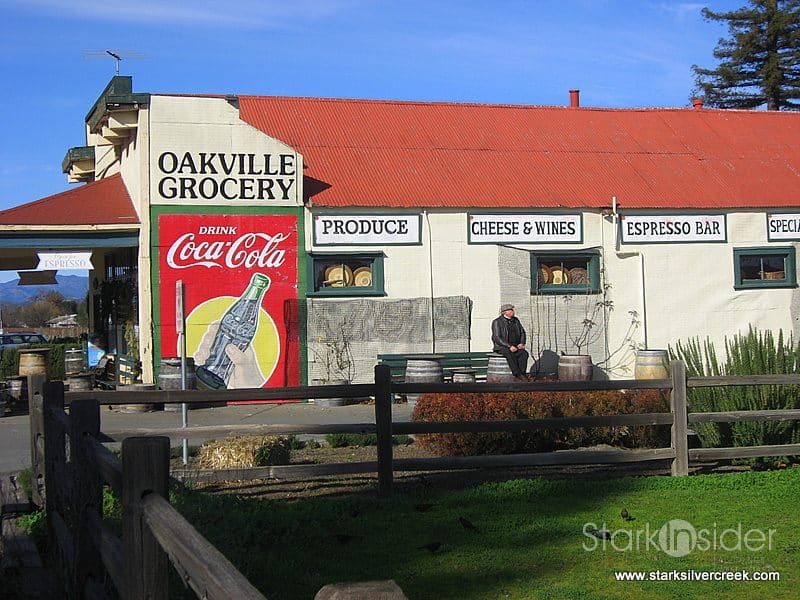 You can find accessible examples of To Kalon under the “Oakville” label. Quality examples include the 2011 Fumé Blanc ($32) and 2010 Cabernet Sauvignon ($45) seen here:

Fumé Blanc is perhaps Robert Mondavi’s nudge-nudge-wink-wink to the industry. It is, after all, Sauvignon Blanc. This 2011 has 91% of it, and the rest is Sémillon. But, back then Sauvignon Blanc had a negative image with the public. How to get around that? Rename it! Ah, it was 1968 and wine marketing had begun in earnest.

My favorite Mondavi wines, though, are the Cabs. And the 2010 is a good example of a quality wine at a reasonable price (a bargain actually by Napa standards) that could afford it regular rotation in your wine schedule.

The winery sent Stark Insider a small, artistic book honoring Robert Mondavi’s life and legacy. I particularly like that they’ve expressed sentiments in a series of reflections by other titans of food and wine, including Warren Winiarksi (Stag’s Leap), Mike Grgich (Grgich Estate), Brad Warner (Foley Johnson), and Thomas Keller (French Laundry), among others.

Here’s what they had to say about Mondavi, in their own words:

“At my interview in 1968, Mr. Mondavi asked my how all the wines were made at Beaulieu Vineyard under Andre Tchelistcheff, what research we did, what my job was. He wanted to hear every detail. After so many questions, he looked straight into my eyes and said, ‘I am going to make out of you a little Andre Tchelistcheff.'”

“Near the end, people started saying, ‘Who’s going to be the next Robert Mondavi?” And I would think, how stupid. There is no next Mondavi. He was one of a kind. He planted an acorn and grew this incredible oak tree.”

“Bob was definitely a risk taker, although I don’t think he calibrated decisions in terms of risk. He tended to say, ‘”What’s there to worry about?'”

“In the early days, Europeans regarded Napa Valley with amused condescension. But but by the time I left Mondavi, he had started his joint venture with Opus One. That this could happen only 13 years after he started the winery would have been unthinkable, but he drove toward it so intensely.”

“In recent years, when we used to get together for Christmas, I remember saying to Bob, ‘Aren’t you ever going to slow down!’ And he said, ‘Never!'”