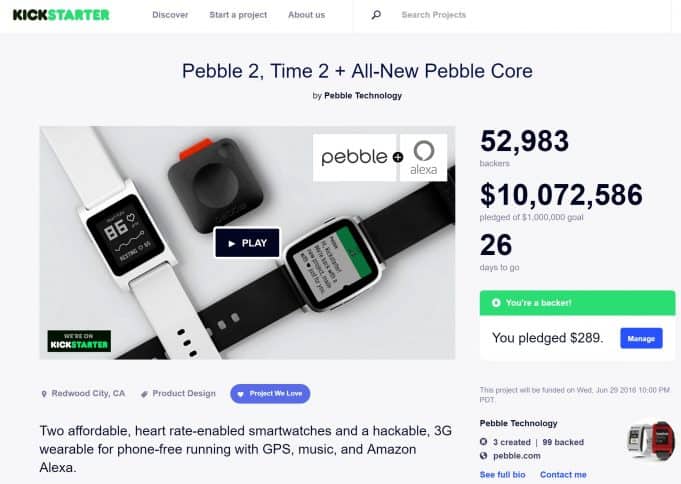 The demand, she is a strong.

That Pebble has already surpassed $10 million in pledges seems to suggest consumers like what they’re seeing.

Wearable fans probably already know the news, that Pebble revealed three new devices at the end of May, and expects to ship them in Q4 of this year.

Pebble 2 and Time 2 look to be incremental improvements over their successors, with a (smart) emphasis on fitness tracking (the #1 wearable sub-market).

The third wearable in the announcement is called Pebble Core, and is a departure from anything the company has done in the past. Targeted at runners, the GPS-enabled Core has no screen, instead later relaying information using sensors to a smartphone. Further, Amazon’s Alexa voice recognition service will be integrated into Core, allowing for hands-free commands — such as, to play music, check on the weather, or traffic.

The Market for Wearables

Many are monitoring Pebble’s Kickstarter, not just to see if it’s a success for the company itself, but also to gauge the overall market demand.

While others like Apple (Apple Watch) and Google (Android Wear-based Moto 360, Huawei Watch, etc.) appear to favor feature richness and apps over everything else, Pebble has taken a simpler approach, one that values ease-of-use. That strategy appears to be working. In addition, low starting prices (the Pebble 2 starts at only $99) have given the Redwood City-based startup a competitive differentiator. This is a very good thing. Pebble’s resources, obviously, can’t match those of its much bigger rivals.

That Pebble has already surpassed $10 million in pledges seems to suggest consumers like what they’re seeing.

Corroborating the trend towards simplicity is IDC. Their most recent wearable market share data demonstrate a trend towards what the analyst firm calls “basic wearables.” Meantime, over the past few quarters according to the report, the smartwatch category has actually lost share to these simpler devices.

In 2012, Pebble smashed Kickstarter records when it raised $10 million.

Already, in 2016, this Kickstarter campaign — for Pebble 2, Time 2, Core — is already the 5th all-time highest Kickstarter. It might be a stretch to break last year’s effort, but the early verdict seems to be clearly in Pebble’s favor.