Yesterday I received the much ballyhooed (at least amongst the REDuser community) “allocation email.” The brief communication simply means a camera, in this case a Red Raven, has been allocated in my name, and will ship shortly: 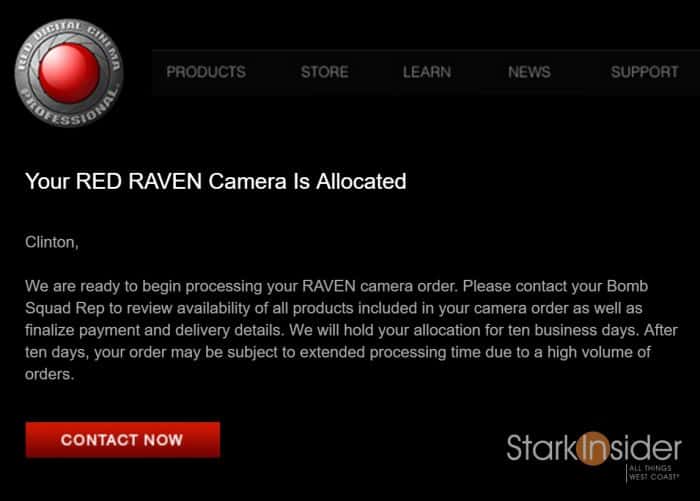 Nothing too exciting. Move along. In other news…

Sure, but what’s interesting about the process as I’m experiencing it for the first time is the way this company communicates — and engages so directly and openly with both prospects, customers, and interested parties alike.

I’ve previously written about the extreme customer loyalty Irvine-based Red Digital Company has built in a short time since it was founded in 2005 by Oakley sunglasses founder Jim Jannard. Now run by the equally charismatic, and entertaining, visceral, occasional f-bomb dropper, Jarred Land, the RED mystique can possibly be neatly encapsulated in the footer that runs on the Jannard’s posts on REDuser:

“We reserve the right to refuse service to anyone with a bad attitude.”

Sounds a bit like another company also run by a billionaire, right here in Silicon Valley. Last year, Tesla CEO Elon Musk famously (and controversially) refused to sell a Model S to a journalist who openly criticized him for being late to an unveiling, and then allegedly delivering a sub-standard presentation. Guess what? No Tesla for you!

This ethos also appears to very much permeate the culture of Red, which itself appears to benefit from a team equally as passionate about the products it sells as the customers who use them to make music videos, documentaries and films. You get the feeling that there is tremendous pride at work here. That they don’t necessarily want a customer, but to extend the family of Red users.

Every day is a good day! Every camera is a good camera! Shoot with what you got! And love your family!

Like most next generation companies, or start-ups based here in Silicon Valley, communication is transparent and frequent, and typically eschews phone calls and old school formal announcements in favor of late night updates on its web site, (seemingly) random bits of news published on the president’s Facebook page, and photos with clues that perhaps suggest an upcoming feature or product. In my experience since pre-ordering the new Red Raven camera last September, it’s a welcome change from dealing with a large, faceless corporation. My “Bomb Squad” rep is merely an email away, and status updates are ongoing. In addition, I’ve learned that yield rates for the company’s high end camera, the Weapon 6K, are extremely low — something in the order of 1-2%. So, for example, if 300 sensors for this $50,000+ camera come off the manufacturing line, maybe around 3-6 would meet quality control standards, and pass the tests needed to qualify as a ship-able product.

Making cameras like these is surely not an easy proposition. After all in Land’s words, they’re “not making chocolate covered mushrooms.” But waiting for it to ship is not exactly one of the world’s most pressing issues either. Dicky Fox might’ve once said, Every day is a good day! Every camera is a good camera! Shoot with what you got! And love your family!

All that to say, Stark Insider should soon be receiving a Red Raven camera, and I look forward to sharing updates here including new videos. Paging Loni Stark!

Meanwhile, look soon for new SI episodes shot on location at the Live in the Vineyard music festival including Ben Rector, Ingrid Michaelson, Daughtry, Zella Day, Shawn hook, and more (you can see the Stark Insider interview with Pentatonix here on YouTube).