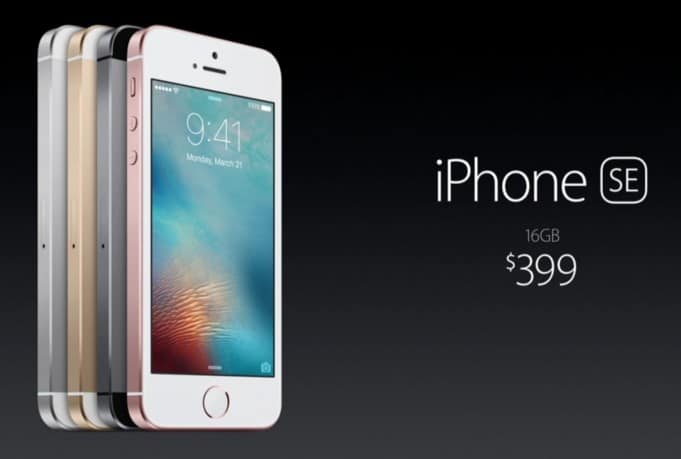 Okay, now about that new iPhone…

For the first time since the iPhone was introduced in 2007, Apple did something it had never done before: launch a new version of an iPhone with a smaller screen. Traditionally we’ve come to expect Apple to introduce an updated iPhone annually with better everything (processor, resolution, camera), and a larger screen. But that all changed today.

In a remarkably subdued presentation — especially by Apple standards — CEO Tim Cook and team took the wraps off the new iPhone SE, a smaller version of the iconic handset featuring a (mere) 4-inch screen. In a world of phablets, and well-reviewed, new handsets like the Samsung Galaxy S7 featuring 5.7-inch screens, it seems to fly in the face of mobile convention which suggests are phones are increasingly essential portals into our connected universes. Bigger surely is better, right?

Apple tells us that its customers said it wanted a phone that could be operated easily with one hand. That, it goes, a 4-inch phone would mean that surfing the web, typing emails, and Snapchatting would be so much easier. No longer would we need to fumble with two hands to get stuff done.

But is that the whole story?

Did Apple really release the iPhone SE because smaller is better?

I think there’s a real reason that Apple chose to embrace a 4-inch phone with a $399 starting price (16GB) — and it’s not because, as Apple stated, that people are “new to iPhone.”

Attacking Android at the low-end

Apple has a problem if it wants to continue to grow. Android is killing its mobile share at the low end. Case in point: phones like Google’s Nexus 5X (made by LG) which can be had for only $199 when new customers sign up to its Project Fi cellular service. That’s a pretty amazing deal considering the 5X features a 5.2-inch HD screen, LTE, fingerprint sensor, decent mid-range Snapdragon processor, and excellent cameras. Or how about the Moto G? A 5-inch HD handset with decent specs made by a marquee mobile brand for only $179 unlocked. Pretty compelling.

Being a premium brand, though, means Apple can’t, and must not, compete on price. In fact, high pricing even adds to the allure and mystique of the Apple logo — sort of like it does for BMW, Mercedes, and Audi. To discount would be to tarnish its image. Hipsters would have none of that.

So, if Apple wants to fend off the likes of Android-powered phones at the low-end, rather than discount its premium iPhone 6 range, it has instead positioned its low-end model with a small-screen to do the job. And because it’s built pretty much using the same metal and glass design, there’s still plenty of Apple magic there when you pick it up. At $399 Apple is able to sway some buyers who might not have otherwise been able to afford a regular iPhone. Better still, it can do so by framing the purchase as one of convenience — that the smaller screen is handier and the iPhone SE is “the world’s most powerful 4-inch phone.” All good. iPhone 6 owners feel fine that their flagship, showy phones are still king of the hill. And new users to iPhone get in on the cheap, but don’t feel cheap in the process.

Ultimately the goal of the iPhone SE is to increase total addressable market for Apple.

Now instead of a potential customer perhaps choosing Android over Apple because of price, there is a savior. Though the iPhone 6 SE is still relatively pricey, there’s a fighting chance someone might pick it over, say, an older Galaxy S phone running Android, or, possibly, a mid-range Huwaei handset (like the $249 P8 lite for example).

You’ll notice that during the keynote today — one that had to be the most underwhelming on the product front in Apple’s recent history — Tim Cook and team never used words like “entry level” or “low-end” or “cheap” or “discount” or “priced aggressively”. Those terms are not synonymous with a premium brand (I should note they did say “affordable” at one point). Instead Apple did its best Orsen Welles (F for Fake) impression and tricked us into believing that the new SE was all about handy one-handed operation and those new to iPhone when, in fact, it was all about appeasing investors and increasing addressable market.