Two years later, when Sarah Silverman finally got the email that she thought she’d never get she hit reply-all and wrote “Yay!”

Then, she said last night at the premiere of I Smile Back at the Mill Valley Film Festival, she spiraled into a little ball on her bathroom floor. “What if I blow it? What if I can’t do it?” She had a full panic attack.

Rest assured, she can do it. And she did do it.

Many comedians make the transition from comedy to dramatic roles. The late Robin Williams may be the greatest example. Based on this performance and the early reviews, Sarah Silverman may soon finding her inbox flooding in with serious roles.

Once again, Stark Insider was on location covering the Mill Valley Film Festival, and it was quite the scene on this evening. Fans flocked outside the San Rafael Film Center to catch a glimpse of the no-holds barred comedian. She gracefully posed for photos, signed autographs, before making her way down the red carpet. 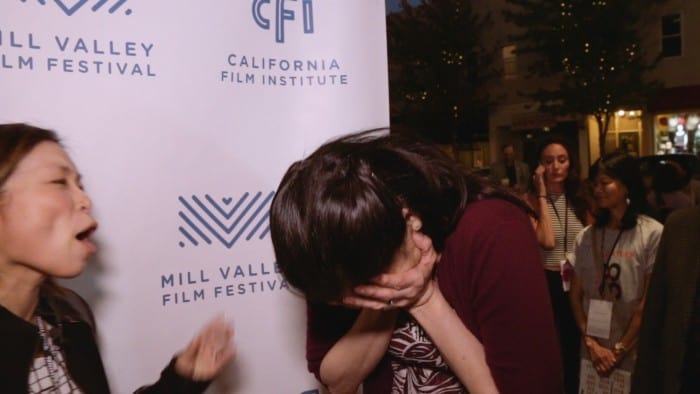 And, as you might expect here on SI, minor mayhem ensued. And, yes, there’s at least one f-bomb. Thankfully it was directed at my “cameraman” Clint. Why? You’ll have to watch the video above to find out!

I Smile Back opens later this month theatrically. It’s the kind of film you don’t soon forget. Love and addiction — somber stuff. And a remarkable evening to be sure.

In this segment, watch as Sarah Silverman arrives at MVFF, meets founder Mark Fishkin and programming director Zoe Elton, and after the screening, entertains and engages the audience with a thoughtful, inspiring, and very funny talkback.