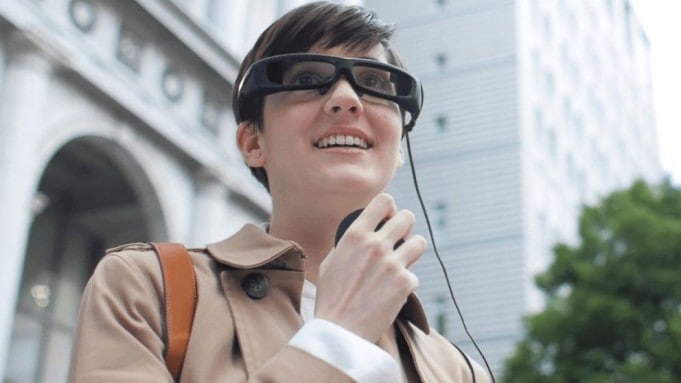 Sony’s slightly late to market with its answer to Google Glass, but it might as well never have tried.

Dubbed “SmartEyeglass” (unfortunate start), Sony has announced that the futuristic product it showcased at CES this year in Vegas is now available for pre-order for $840 USD.

I can only imagine the internal meetings at Sony over the past few weeks. Google Glass is a (very public) flop. And, yet, here is Sony coming to market late, and with an arguably even goofier looking design, with perhaps even less functionality. Granted the price is better, by about half, but you have to wonder if a case of escalating commitment caused Sony execs to throw in the towel, and launch it, for better or worse. And it’s hard to see any outcome that errs towards the better side. Consumers have spoken, and it appears that funky eye wearables are not quite ready for primetime. Again, see Google.

So it’s with a mild sense of irony that an article today on Fortune suggested that Sony’s new SmartEyeglass was a “Google Glass killer” – I’d suggest Google Glass did not need any help in the death department.

The inability for wearables such as Google Glass, and Android Wear-based smartwatches to catch on so far remind me of the early days of the tablet.

In 1987 Apple released the Newton. It was pretty amazing. I was working at Bell Northern Research in Ottawa at the time when I first got my hands on one in 1994. A co-worker was trying to sell it. He was offering extra batteries, lots of software, stylii, and other goodies. I can’t remember the price, but it was surely well over $1,000. I played around with it a bit. I loved it. Newton could recognized my hand-writing fairly decently. There was some cool programs (not yet apps!) available too for keeping notes, setting reminders, etc. I almost bought it. But it was that nagging feeling… did I really need something so fancy? Plus, there was always the Palm Pilot that was far more compact and did a lot of what Newton did, and with far better battery life to boot.

Years later, of course, Apple would perfect the formula. The iPad was born and the rest was history (once again).

While I think early wearable efforts are laudable (I especially love my Pebble smartwatch), the designs are crude, the software half-baked. And, worst yet, companies such as Apple and Google, and now Sony, haven’t figured out a way to show the mass market how these mildly interesting devices fit into, and benefit, our everyday lives. I don’t doubt that day will come. In fact, it may be as soon as this April, when Apple starts shipping its smartwatch. Designers of the Apple Watch looks to have at least given as much attention to its fashion appeal as its functional value. Could that be the difference?

If it turns out to be true, that the Apple Smartwatch opens up the proverbial flood gate for successful wearables by first establishing the market broadly thanks to understanding the fickleness of fashion and clothing at large, Sony (and Google) could learn a thing or two about trying to sell tech that we wear: it needs to look somewhat cool at worst, and, fashionable at best. Google Glass didn’t need a Google Glass killer. Now I fear neither will the Sony SmartEyeglass.