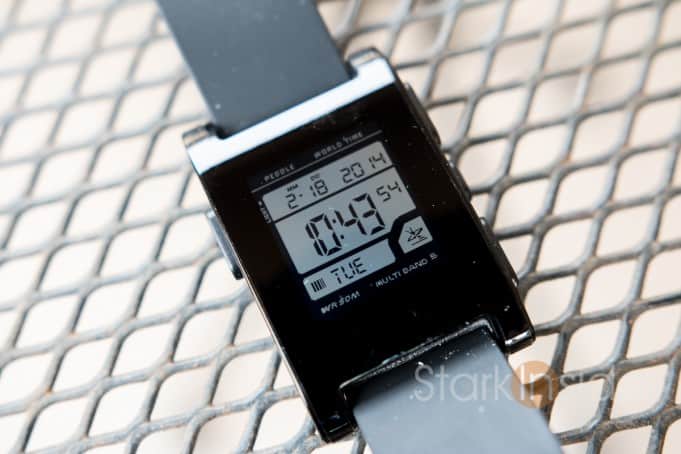 4.5 out of 5 stars - 'Right on the Money'
Price: $149
PROS
+
Excellent e-paper display, readable in sunlight. Best-in-class battery life. Lots of apps and watchfaces. New app store is easy to use (still beta on Android). Shake wrist for backlight. Well made. Fast, readable notifications (with available history). DND option.
CONS
–
Screen is not Gorilla Glass. Occasional snickers you get from hipsters wearing Baume et Merciers and hanging at Starbucks with their Caramel Flan Fraps.
VERDICT:
"Right on the Money"
The best smartwatch on the market. Lots of developer support means lots of useful apps and watchfaces available. I'll never take mine off.
Review by Clinton Stark

This was not supposed to happen. A plastic digital watch? Are you kidding me? No way. Not to be. Not me. Never in a million years.

Well 2014 must be that millionth year.

There’s life before Pebble. And, now, life after Pebble. What started as mild, semi-amused interested turned into a (somewhat concerning) round-the-clock, geeky obsession. Now I can’t  imagine ever leaving home without my trusty, too-cool-for-school Pebble. The last time I was this excited about a watch it was 1985, I was sporting a skinny white leather tie, dancing to Duran Duran’s The Reflex, and wearing a Swatch.

But it didn’t start off that way. 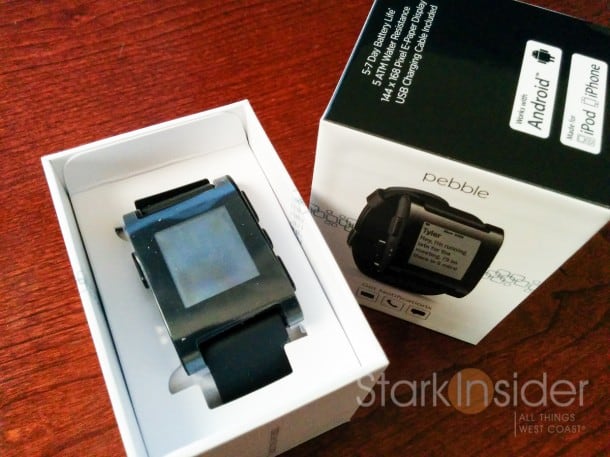 When I first popped open the Pebble smartwatch tester for Stark Insider I was awash in oozing amounts of skepticism. The screen  looked like a cruel joke at best, and a throwback to the digital watches of yesteryear at worst. 8-bit Atari graphics would be an upgrade, I thought at the time. The plastic housing didn’t help matters – it had an unfinished tech project vibe, with large buttons that might feel right at home in a DIY hobbyist kit (that you could buy at the old and fun Radio Shack).

Undaunted I paired Pebble with my Nexus 5. No problems there. Bluetooth worked well. “Your Pebble is connected” a message confirmed on the notification shade on the phone. I charged up the “smart” watch, and found it quite odd that the charging pins on the left side of the watch are left exposed. Ugly. Weird. Geeky, again.

Testing Pebble for a few days I realized a few things…

It could tell the time. Perfectly well in fact.

It could notify me of new messages. Facebook, Twitter, SMS and Gmail alerts appeared on Pebble. How annoying. 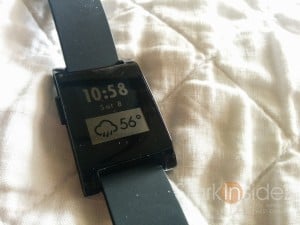 And, if you had the patience to navigate some clumsy software, it could  be configured to display myriad watchfaces. Because, you know, we all want a Stark Trek LCARS inspired look on our watch. Or a photo of C-3PO. Or “Texas Time” with the Longhorn logo and the inscription “And OU Still Sucks” below it. Indeed, my productivity was increasing by the (digital) second. Did I mention the geek factor with smartwatches in general, but Pebble in particular, goes to 11?

So I packed the thing up, and sent it away. I immediately felt the urge to drink a two-four of Molson, and sharpen a saw.

A day later, something happened.

I found myself actually missing Pebble.

Then I realized why: I actually found it handy getting notifications on my wrist. But didn’t realize it at the time. In the right light, Pebble was actually sexy. And, practical. It was especially useful when I was driving, at the gym, or working around the house, when reaching for my phone in my pocket (if it was even there to begin with) was a bit of a pain, or impossible because I was otherwise occupied.

Also, Pebble updated their software to v2.0 and were on the verge of launching an app store. Maybe I should revisit Pebble.

PEBBLE – KIND OF SNEAKS UP ON YOU

So it wasn’t love at first sight.

This time I bought my own Pebble. Not bad. If I didn’t like it (again) I could return it.

I installed a great little app on my Nexus 5 called Pebble Notifier (free):

Now not only could I get notifications from the majors–Gmail, Facebook, Twitter, SMS, Google Voice–I could also get ones from third party apps like Instagram, Falcon Pro (a great Twitter app), NY Times, and essentially any app that places an alert icon and message on the Android notification shade. I turned off Gmail — otherwise my Pebble would never stop vibrating.

I quickly became accustomed to glancing at my watch when it vibrated to see alerts. If something required immediate attention I’d pull out my phone (or laptop), otherwise I’d simply dismiss it with the middle-right button. With the 2.0 update, I could now also review all  my missed notifications, much like can be done by swiping down on Android. My skepticism abated.

AT THE GYM – KILLER APP?

I then downloaded another nifty app, this one called Music Boss ($1.99). It give Pebble the ability to control music on your Android device – adjust volume, back/forward tracks, play/pause, etc. For me this quickly became a bit of a killer app. At the gym I play music on my Nexus 5 using Pandora, and Google Play Music. Reaching into my shorts (that doesn’t sound right) to skip tracks or adjust volume is a (minor, admittedly) nuisance. With Music Boss I can use Pebble. It’s a fantastic convenience. One alone that would make it worth the price of admission. Plus–don’t forget!–Pebble can also tell the time. 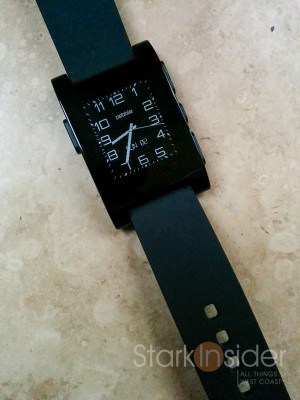 Speaking of the time, I soon found myself immersed in a world of super-geekdom. Every day I’d take a few minutes and rotate new watchfaces onto Pebble. It has 8 slots that can be used for watchfaces and/or apps. You load them onto the watch using the Pebble app. You can store extras in a “locker” – which simply means they’re stored on your phone, ready to be loaded onto your watch at your command.

And here’s where the small team at Pebble have done a stellar job (in addition to completely a wildly successful Kickstarter campaign that bootstrapped the company): Developers love this thing. More so, it would appear, than the Samsung Galaxy Gear (flop) and Sony Smartwatch 2, two of Pebble’s direct competitors. So there is no shortage of apps and watchfaces on the new Pebble App store. Every day something new (and usually interesting) pops up.

In addition to the time, most watch faces also provide additional information, such as status of the bluetooth connection, the weather, date, day of the week, etc. Most have a settings option that can be accessed from the Pebble app. There you can choose metric/imperial, 12/24-hour clock, second hand, etc. 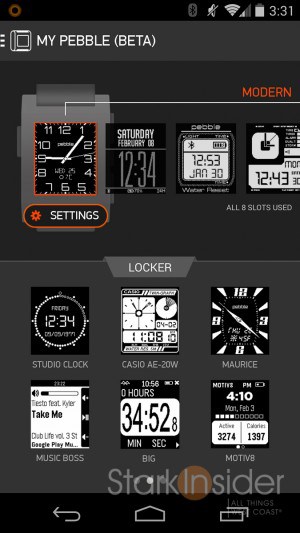 I soon discovered the joys of 80’s watch nostalgia. Only this time I was driving a Prius and listening to Ellie Goulding. And wearing a Pebble. Seems like there’s a sub-culture of Casio lovers. You can now find a treasure trove of cool (if that’s your sort of thing) Casio-inspired watchfaces on the Pebble Store.

Leave it to the technorati to complain about the black and white Pebble display. I did too, at first. No color! Too small! Then, after spending a few weeks with Pebble, I realized an e-paper display was the right choice. Not only do you get longer battery life, you can more readily read the watch in the sunlight – living in Northern California this sort of thing is important to me. 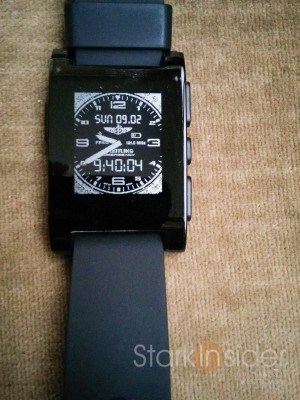 The e-paper choice, though, is indicative of a differing philosophy with the likes of Sony (Smartwatch 2) and Samsung (Galaxy Gear). Pebble appears content to be merely an accessory – an extension of your smartphone (the real “smart” in this equation) that provides additive value. Others have Dick Tracy aspirations; by replicating features/apps on the watch they begin to creep into smartphone territory. I prefer the Pebble approach. After all, because these watches need to be tethered, your smartphone (be it iOS or Android) is going to be close by, so why on earth would you want to compose an email (or even a Tweet) on your watch when you can use the much more comfortable screen on a phone? 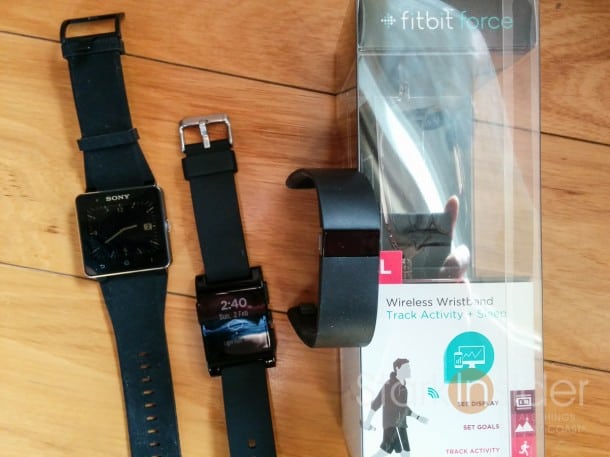 The wearables market is young. It may not even really exist yet. What we’re seeing with these smartwatches are baby steps. Pebble has shown some early success, though, having moved approximately 300,000 units. As a low cost, purpose-built device I think these devices will see success, if not with the mainstream at least with niche markets. Look at fitness. Fitbit has blown that market wide open (I tested a Fitbit Force, but prefer wearing a Pebble as not only can I get activity tracking functionality, I get an always-on clock, plus notifications). Samsung flopped for two reasons: (1) it only works with certain Samsung phones, and (2) it was ridiculously priced at $300 (about the same price as phone for goodness sake!).

Google Glass will be the real wearables test. Will consumers buy into the whole idea of wearing something on their face 7/24, or will social (and fashion) norms prevail?

I don’t know the answer, but for now I do know Pebble is on the right track when it comes to smartwatches.

THERE’S NO GOING BACK

Pebble recently unveiled a slicker version of the watch called “Steel.” It provides all the same functionality–nothing more, nothing less–but comes in a package that looks more conventional, not to mention more svelte. To that I say: boo-hoo! In Silicon Valley we wear our geekiness with pride. If you have a Tesla, chances are you already have the Kickstarter-edition of the Pebble. All is right with the world. It’s like a rite of passage; start-ups vs. the man. We will proudly support and show our support loud and clear for the innovators, the crazies that dare to take on the big guys. Even if that means getting the occasional snicker from the hipster at Starbucks wearing a Baume et Mercier and sipping on a caramel flan Frappuccino, I’m among the converted and ready to represent. I hadn’t worn a watch since I had a Tag back in ’99. Now, this is definitely the New Flesh.

My recommendation: skip the more expensive Steel and go for the perfectly cool, original Pebble. It’s the best smartwatch going. And with a better display and battery life bests the (decent) Sony Smartwatch 2 and with wider compatibility and impressive list of apps it wallops the over-priced and over-engineered Galaxy Gear. Those considering the Fitbit might even want to give Pebble a look. You get tracking apps (though none as refined as Fitbit yet) and a whole lot more for only $38 more.

Pebble is firing on all cylinders right now. I admit: I’m a geek, and I’m smitten. Absolutely, there’s no going back.

How on earth did I live without Pebble? Last time I was stoked about a watch was 1984. I was wearing a Swatch, dancing to The Reflex.