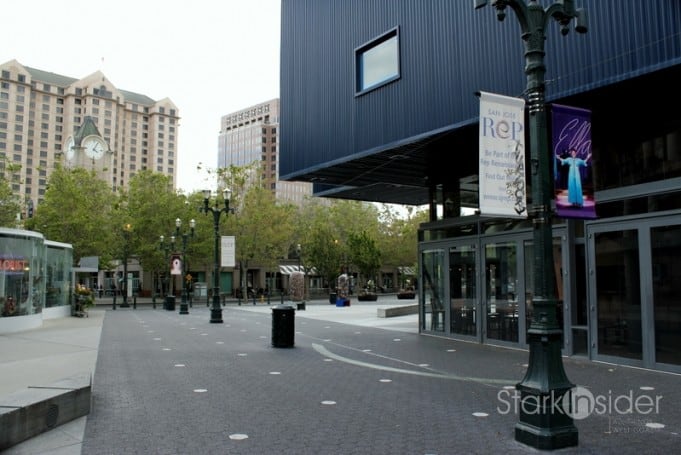 While it looks like it won’t return anytime soon as the “San Jose Repertory Theatre” the space–the Hammer Theatre–could find a new arts tenant soon.

For those that have been following arts news in and around Silicon Valley we were saddened (though not entirely surprised) at the bankruptcy of the San Jose Rep, an institution here for decades. Multiple reports from the Mercury News suggest a committee is working hard to ensure the space remains a fixture for artistic good in the heart of downtown San Jose.

Veteran theater critic Karen D’Souza in a piece this week said that the space could be a single producing company, a consortium of arts groups, and that “overall goal is to make sure the venue will remain a cultural organization that will enrich the fabric of life in the South Bay.”

An application process opens January 30 and a committee will be evaluating submissions and making recommendations come May.

Man around town Sal Pizarro notes that the city’s annual subsidy (occasionally a sticky point to be sure) of $285,000 will be continued.

We and the Stark Insider team miss the San Jose Rep. It was one of our favorite places to not only see a show (it made for many a breezy evening, stopping downtown for a cocktail and good eats before strolling across Cesar Chavez Plaza to the big blue box), but also for shooting videos for our theater segments here on SI. In fact, it was in 2009 that the Rep gave us our “big break”. We were invited to shoot an interview with the cast of The Kite Runner. The rest, some 500 videos later, for better or worse, is admittedly dubious history.

But if the space is to arise once again, I hope pragmatism rules the day. For any long-term solution to work, of course, financials will need to be kept in check. I was shocked to see during the bankruptcy auction process of the Rep’s theatrical wares so many tools and equipment related to set construction–saws, racks of wood-working gear, various industrial machinery. It seemed slightly over-the-top. I’m continually reminded of what the Magic Theatre does in San Francisco with ever-challenged resources, or what The Creature team did a few years ago in their stellar production at an intimate, stripped down black box. When it comes to the creative process I often wonder, is less more? Sets I’m guessing are one of the biggest cost centers. And yet, its correlation to the quality to any given production is suspect.

By summer we should know what will come of the space. It would indeed be a shame if it were turned into a Safeway or Walmart.

Here’s a blast from the past, shaky cam and all: a “stage combat demo” featuring wonderful actor Barzin Akhavan (Law & Order). And, in true non sequitur Stark Insider fashion, a recap at PF Changs. Oh, the memories.

SSC Presents: Stage combat demo with the cast of The Kite Runner from Stark Insider on Vimeo.