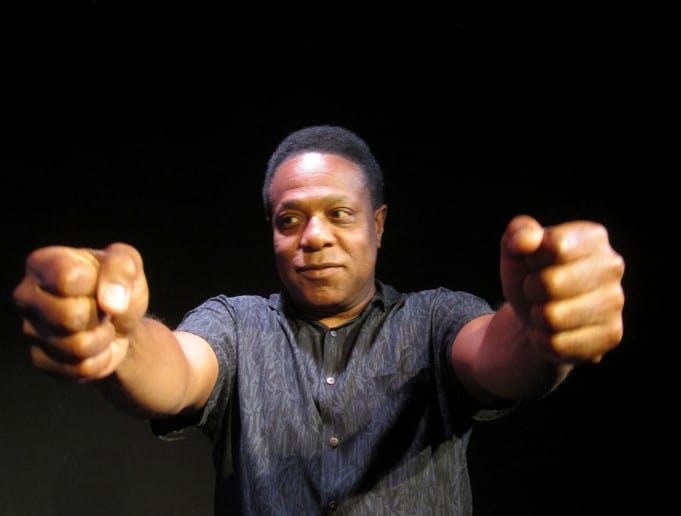 Brian Copeland’s been busy this year. In addition to his KGO radio show, he reprised Not a Genuine Black Man at the Berkeley Rep, brought us Scion, a grisly real life story about entitlement and the murder of three San Leandro meat inspectors in 2000, and even took time an interview with Loni Stark. Fortunately, it doesn’t end there, as Copeland’s The Jewelry Box just opened this weekend at the San Francisco Marsh.

Copeland’s 2012 production of The Jewelry Box completely wowed me. This is a brave show, a funny show, and one that lives in your mind throughout the year. Copeland’s reprisal of this material continues to work its magic, retaining all the strengths of previous performances, without being weakened by repeated performance or even repeated watching. A master storyteller, his Oakland could just as easily map to East Orange, NJ.

Saying that this one-man show is about the six year old Copeland’s efforts to get his mother a jewelry box would be like saying Moby Dick is about a whale. It’s just as much about used cars, street winos, small boys in dress up jackets with gold anchor buttons, family, macaroni and glitter, and Christmas magic. Although Copeland succeeds where Ishmael fails, it’s hard not to leave the theatre with a nagging worry about a world in which six year olds need more equanimity than Taoist sages.

The Jewelry Box could be our new Christmas story. If you just can’t stomach another Christmas Carol, another Nutcracker, another Messiah, another flash and gilt Christmas tree, take heart with Brian Copeland, who tells a Christmas story all the more precious for its proximity in time and space. His story resonates with your best self, back when your real community was more consuming than your virtual one. Copeland’s story works, in part, because he channels his child self with ease, making more people fall in love with his grandmother than his grandmother ever knew.

Christmas 2014 differs from previous years. Like it or not, thoughtful people bring the events in Ferguson and Eric Garner to Christmas this year. In his interview with Loni Stark, Copeland noted “When people are judged on their own individual achievements and shortcomings, as opposed to somehow being representative of their ethnicity, then it will be over.” However, until then, we’ve got Copeland, bringing us all a little closer to that day. Hopefully, we’ll see more of him – with more new material – in 2015.