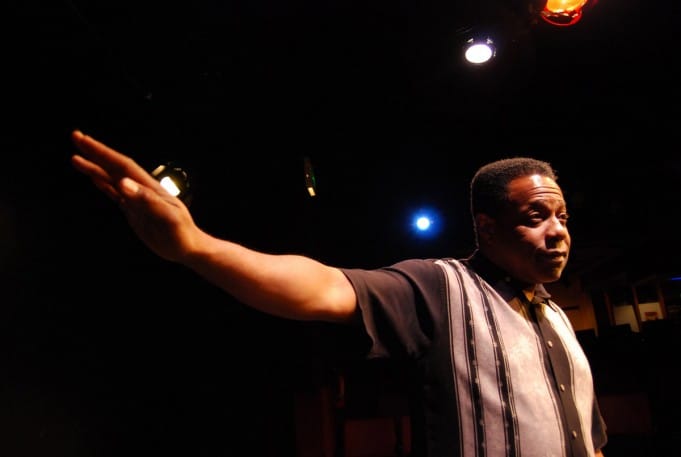 It’s a rare press night in which 85 percent of the audience makes it to their feet for a standing ovation. After all, these are members of the press. Many – if not most – make a point of keeping their butts firmly planted, even while wildly applauding. Brian Copeland’s one-man show at the SF Marsh broke through that glacial chill.

The first time I caught Copeland was his Christmas show at the Marsh. Afterwards, I marveled that Copeland was such a master of his craft that his script, which would have been maudlin in other hands, had almost all the audience dabbing eyes. When I heard he was presenting Scion, a grim tale about a San Leandro murder, catching the show was top priority,  largely because it seemed so different from Copeland’s previous material.

In truth, Scion was bigger than I imagined, informed as it was, not only by the story of the murder of three meat inspectors at the Santos Linguisa Factory in 2000, but by Copeland’s musing on bugs, windshields, race, rules, privilege, and regulatory zeal.

Let me diverge a bit. This is the same Brian Copeland that puts on the KGO Brian Copeland Show. I confess, I listened to his show briefly after catching his December act at the Marsh and was put off by the harangue. However, not liking his radio show shouldn’t be a reason for not catching this show. He’s smarter with this material, more of a storyteller and more of a philosopher. Only for the briefest of moments did he threaten to start with the radio harangue – and then wisely backed off.

As he did with his Christmas show, The Jewelry Box, Copeland took on the persona of at least a dozen characters that people the story of the Santos Linguisa Factory, some of whom (his grandmother and sister) also appeared in The Jewelry Box. Copeland can unabashedly play the cute card with the best of them, which brings makes some of his characters instantly recognizable and immediately endearing.

Afterwards, I found myself musing what would have happened if Stuart Alexander, murderer of three meat inspectors, and San Leandro mayoral candidate, had actually become mayor of San Leandro. One suspects that the mishegas of Chris Christie and Rob Ford would be extended to a natural conclusion.

Copeland used this material to talk about privilege, acknowledging that most of us, including himself, exercise some degree of privilege. He distinguished our privileges, such as they are, from that of sausage factory scion of Stuart Alexander. According to Copeland, the writing was on the wall early for Alexander, who made an art form of exercising misplaced entitlement and evading responsibility.

Alexander’s belief that he’d get acquitted for the murders made it seem that they were just one more step in a natural sociopathic progression. As he noted in closing, “sometimes you’re the bug and sometimes you’re the windshield – and we’ve got to do better for those folks who are always the bug.”