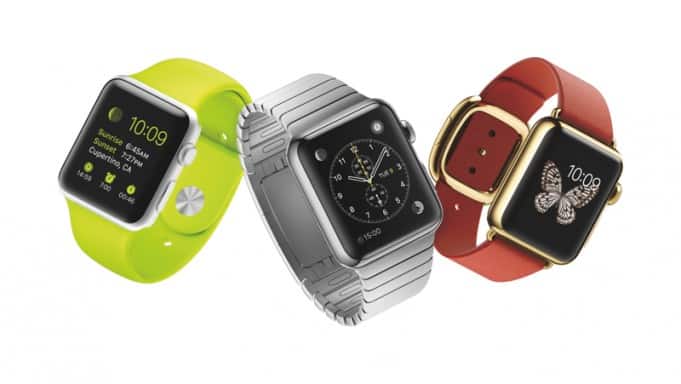 I keep flip-flopping on the aesthetics of the new Apple Watch. Is it a gem of a design? Or is it just an atrocity – something that Jobs would never have green lighted?

It reminds me of that Seinfeld episode, The Strike. Remember that one? Jerry was dating an attractive woman. All was good until the lighting went wrong. Then… ugh. He could never determine ultimately if she was as pretty as he had hoped.

In Apple’s (stunning) video reveal it looks like the biz. No question – glorious curves, bespoke design. A lot of that has to to with the voiceover by Jony Ive – calm, steady. And especially, that Brit accent to boot. Notice too how many of the initial press shots of the Watch are closeups. That helps accentuate the pretty curves. The much ballyhooed Digital Crown also looks particularly attractive close-up, as do the various gorgeous bands. In these videos and in some photos it looks like a knockout.

Take a few steps back.

All of a sudden the Apple Watch looks decidedly drab. It’s square. Kind of generic looking. Look at it from an angle up and to the right, and that Digital Crown looks like one ugly sore. It seems at the macro view at least the sum of the parts does not make for a pleasing whole.

Than again, with the right band, and the right screen it can, again, look sexy.

So what to think?

I still believe the Moto 360, and even the LG G Watch R (the round version of its Android Wear smartwatch) are leading the class. Seems like I’m not alone – some leading designers are even saying the Apple Watch reveal may even mark the day  that “Apple lost its distinct edge in design.”

Because I don’t use an iPhone (though the Apple Watch has made the strongest case so far for considering a… gasp… switch) a watch running Wear would be the best option for an Android fanboy like me. So far, though, I’ve been woefully disappointed by the barely one day battery life of Wear hardware. When I tested the LG G Watch and Samsung Gear Live I couldn’t get around the fact that I had to dock it every single evening. Too many that won’t matter a bit. We charge our phones over night, so why not our watches too — no big deal, right? For me it is a big deal. Not to mention the screens on the Wear watches are virtually unreadable outdoors. Pebble it is for me, for the moment. They got it right: 7 day battery, easy to read screen. Sure it’s not as sexy as Wear and the Apple Watch, but it gets the job done with aplomb (“Life with Pebble — There’s no going back“).

After re-watching Tim Cook’s stellar presentation (he nailed the mood, the delivery, the pace) of the Apple Watch along with Kevin Lynch’s impressive demo, and then checking out all of its features on the Apple web site I came to this conclusion:

Most of that conclusion can be credited to Apple’s ability to tap into our emotions. Some how, how way–whether its the iPod, the iPhone, or iPad–this is a company that knows a product and our response to it is more than just a spec sheet. Check out the various Twitter reactions, and it’s clear: the Apple Watch will sell out.

Google, meantime, has a window of opportunity. Yesterday, Apple spilled the beans on all of the Watch features. Yet the product won’t ship until “early 2015.” That gives Google’s Wear team about 5 months to catch up, tweak their OS, and release updates. 5 months?! An eternity in tech. It could be even more if the Apple Watch doesn’t ship until February or March.

The fact that Google rushed to market with its smartwatch platform, and Apple took its time, demonstrates the differing approaches to the market. Google gets there fast and iterates (remember the T-Mobile G1 phone in 2008, the first phone to run Android?). Apple polishes the stone. Perfects. And perfects some more.

Being first to market won’t be Google’s only advantage in the wearable derby. Once again licensing will help get Android Wear into more markets via more devices. Samsung, LG, Asus, Motorola – those plus many partners are already shipping Wear product or will soon. Apple, as history suggests, will be the only maker of hardware based on its watch platform. Likely we will see annual updates whereas Wear will enjoy all sorts of launches, and updates throughout the year.