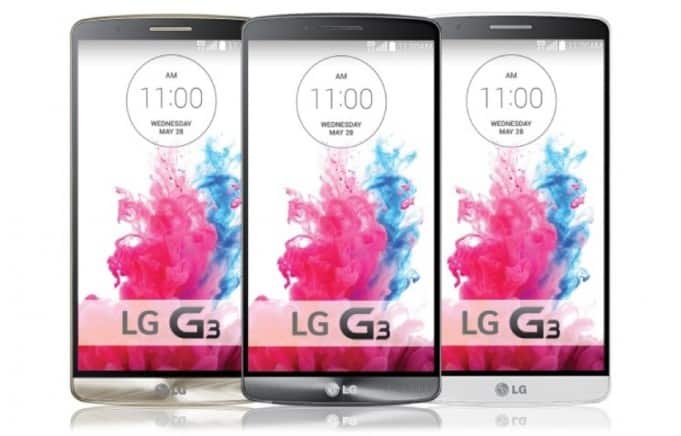 The LG G3 flagship Android smartphone is here, and it’s a doozy. Well, here as in South Korea. ROW to follow soon. I wouldn’t be surprised if we see it domestically in June, or in and around Google I/O (June 25-26).

Spec-wise it’s a monster, ranking right up there with the best of the top drawer competition including the HTC One and Samsung S5: 5.5-inch IPS display with (over-the-top) 2560×1440 resolution; 3GB RAM, Snapdragon 801 quad-core processor; (freakin’) laser auto-focus; and up to 32GB of storage.

Available in six colors, the G3 is also svelte with minimalist styling, including thin bezels reminiscent of the G2, and, Nexus 5 (also made by LG). Overall, I like LG’s design direction. Not quite up to HTC’s or Apple’s gorgeous metallic builds, but nevertheless a well-made, solid phone.

LG extols the virtues of the smartphone’s “grip-ability.” Interestingly, there’s no explanation in the video below posted to YouTube as to why the G3 is more grippable than the competition (or phones with smaller screens for that matter). I concede that LG is finally making better phones – in fact they’ve turned the corner from OK, to even desirable. Good on them.

What’s most interesting about the G3 for many of us Android fanatics is that it could reveal what the next pure Google phone will look like.

If history is any indication the Nexus 6 could simply be the G3 with a pure version of Android installed, sans MicroSD card slot (remember, we’re all supposed to be living in the cloud). But the word these days is that Google will can the Nexus program and replace it with something called Android Silver. I’ve written before why it’s time for the Nexus brand to be gracefully retired (the mass public want something less machine-like in name, something warm and fuzzy).

Whether or not we see a “Nexus 6” branded device in 2014 or not, I suspect we will still see the LG G3 offered on the Play Store, perhaps as an unlocked GPE (Google Play Edition) device.

It’s clear there are two extreme markets at play when it comes to smartphones: the low-end/emerging markets, and the top-end/saturated ones. For the latter, the game has become all about feature overload, high price, and, for some, even bragging rights. Instead of an influx of models in US/EMEA/Asia, for example, we’re seeing a select portfolio of heavily marketed devices. In the U.S that means essentially the Apple iPhone 5, Samsung S5, HTC One, and, now, LG G3. Each one of those is likely to continue to be celebrated at an annual event, with substantial marketing and buzz surrounding each successive model. Sad that Motorola really isn’t part of this group any longer – Droid RAZR reboot, what happened?