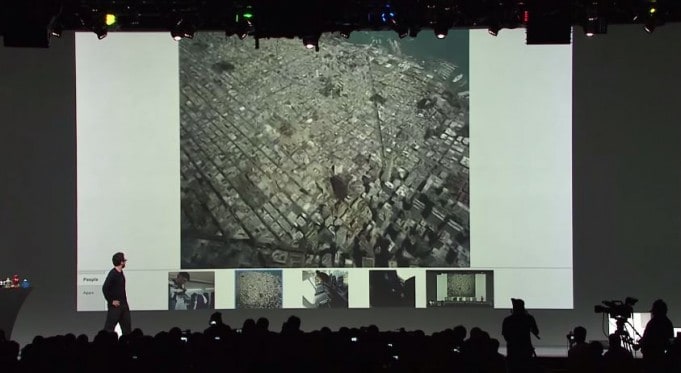 Google has revealed the schedule for I/O. The annual developer conference takes place June 25-26 in San Francisco, and features two days of in-depth discussions, seminars and demos focused on several of the companies technologies and platforms.

Even for us non-developers the event is particularly significant. Google typically provides an in-depth look at not only its current products, but also its upcoming ones. Who can forget, a few years back at Moscone, the wild demo of Google Glass featuring parachuters? That could very well be the one tech stunt to top them all – at least as far as conferences are concerned.

The tech media loves pouring over the schedule, looking for clues as to what Google may or may not do in the months, and years, ahead.

Save Face: It will be interesting to see what Google does with Plus. Surely management won’t axe it like Google Wave.

Interestingly enough, one of the biggest headlines regarding I/O is something notable absent from the schedule:

The struggling social network is no where to be found (though according to Ars Technica Google+ was mentioned in last year’s schedule 20 times).

That’s not entirely a surprise. Earlier this year Google+ head Vic Gundotra left the company. Not a good sign. People typically don’t leave or get jettisoned when things are going well. And despite a pretty and highly functional UI (besting Twitter and Facebook imho), Google’s attempt at social networking has been a dismal, though rare, failure.

One strategy Google employed in a desperate attempt to get more users and engagement that I’m not fond of: having Google+ forced upon us for logging in (Gmail, YouTube, search, etc.) and being forced to use it for commenting (YouTube). Though I’ve come to accept the idea – largely because I’m so deeply entrenched in all things Google – I firmly believe the best products and services attract users because of the benefits they afford. If you force me to use something, chances are there’s something inherently wrong with the scenario. If you’re going to force me to do something it might as well be to make me eat liver.

It will be interesting to see what Google does with Plus. Surely management won’t axe it like Google Wave. Unlike that disaster, Google+ does have niche traction in the tech community. And that’s nothing to sneeze at. Also, it looks like the name of the game will be all about “identity” and that Google will start pushing the social platform as a way to tie user experience across devices (Android, iOS, web) and “to get more users and more engagement.” That could be an interesting direction.

Meanwhile, Chrome appears to be a shining star at this year’s I/O. At least three sessions are dedicated to the platform.

Multimedia and wearables also appear to be key themes this year for Android. That makes sense given the amount of interest consumers have in taking selfies and shooting short videos on the go. The eagerly anticipated Android Wear platform will be of significant interest to many developers and companies looking to potentially ride the next wave of mobile growth. “Android Wear: The Developer’s Perspective” on day 2 will surely look to fuel up a cadre of developers interested in building “contextual” apps for upcoming devices such as Moto 360 (looks slick) and the LG G Watch (also compelling!) – what will become of Pebble?

Then there’s the hardware.

Google usually makes a big splash at I/O. One of the most significant was in 2012 when it unveiled the Nexus 7 tablet – a dazzling piece of kit that was an immediate smash (though I’ve heard sales have fallen off since).

Will we see the oft-rumored Nexus 8 tablet?

A mid cycle upgrade to the Nexus 5?

Or will Google rely on its partners this time… maybe a Moto X+1 smartphone?

Some are suggesting that a successor to the original Google Glass will make an appearance. A new, lower price might also help Google reach a wider market.

If there’s one thing you should catch at I/O it’s the keynote. Once again it will be livestreamed. The two hour presentation is scheduled for June 25 from 9-11am Pacific. For us who follow the world of tech, it’s a must see.