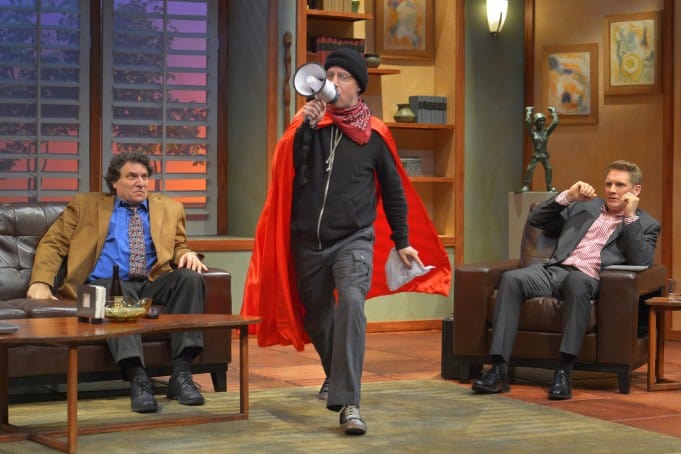 In Silicon Valley bugs are not a good thing. We learn to live with them. The wiz-bang capability and daily convenience of things like Google Now, Apple Siri and (the new) Microsoft Cortana are typically worthwhile trade-offs in spite of occasionally flaky software.

But bugs in Game On, a new play set in Silicon Valley that premiered last night at the San Jose Repertory Theatre, could be the next big thing. A billion dollar thing. Central to an excruciatingly long, painful, emotional pitch meeting for two seemingly misfit entrepreneurs, bugs such as crickets, meal-worm and grasshoppers, while accepted by consumers in other countries around the world, have failed to make inroads domestically. Maybe its time has come? Bugs. A good thing?

Silicon Valley is an interesting and exciting place to be in 2014. The last time this much VC money was flowing was–I dare say–in 1999.

If the meat industry is an expensive, environmentally damaging business (cow methane), then maybe U.S. consumers are ready to embrace these high protein alternatives to beef. That, according to Alvin (Craig Marker), an anxious, down-on-his-luck, former hedge fund manager, will require some “re-branding” and “scaling.” Or so goes the high intensity pitch. His business partner Vinnie (Marco Barricelli), a blustery taxi driver from Brooklyn, seems less inclined to due process and formalities, and incessantly begs anyone to sample his homemade bug wraps.

Set in a Los Altos home, our two would-be start-up founders are looking for seed money. Holed in a swanky room, chugging beers, watching a tense San Francisco Giants game, they await their meeting with a well-heeled VC. They discuss and debate the structure of their pitch. Vinnie sees the human element in the opportunity – just as he can tell the way an at-bat by Pablo Sandoval will be successful based on body language. Alvin, meanwhile, is all about the numbers. He’s run them over and over in his parent’s basement in San Mateo. The numbers don’t lie. Just as he uses rigorous mathematical patterns to manage his fantasy baseball team, he’s employed all manner of spreadsheet magic to deduce that the market potential is huge; it must be true, for the numbers on his iPad say so.

There’s several interesting elements and choices in this new play by Tony Taccone and Dan Hoyle.

First, they’ve elected to make the core idea of the start-up pitch about something non-tech related. This is not another Facebook in the making. It’s not a messaging service like WhatsApp. And it’s certainly nothing to do whatsoever with web services such as Yelp or Google Search. This is about bugs. Protein. And factories in the Dominican Republic. So while you might think a play set in Silicon Valley about Silicon Valley things like VCs, pitches, and deals would get technically deep it refreshingly does anything but.

Rick Lombardo, director of Game On, told me after the performance that the food in the play is real. If you see the show, imagine what the crew needs to do every night to clean up and reset the stage!

Then there’s the backdrop of baseball. By setting the play to the course of a Giants game (extra innings against the Dodgers no less), there’s plenty of opportunity for sports metaphors, not to mention plenty of competitive ribbing between the two leads.

ALSO SEE: The Next Big Silicon Valley Idea Could Make You Laugh (Video)

Performances in the 90 minute play are solid, especially noteworthy given this is a dialog-heavy world premiere — much like we saw recently with Bauer at San Francisco Playhouse there are no set changes, and the leads are on stage for the entire play. There’s no shortage of laugh-out-loud moments. Actor Mike Ryan has what might be the scene stealing moment in the play. As an extreme environmentalist, and host of the hoity-toity Los Gatos party, he decides to dawn a mask and black cape in an effort to convince his Whole Foods-shopping chums that they should take up his cause. Without giving away too much, I’ll just say this scene was a whale of a good time, and it brought the house down last evening at the SJ Rep.

Game On has its share of small hiccups. Early pacing seems awkward at times – though perhaps the extended silences and stunted delivery are deliberate in a Waiting for Godot kind of way. The differences between Alvin, a slick numbers guy in a suit, and Vinnie, the F-bomb dropper who looks like he’s just stepped out of a cab after a week of shower-free driving, is perhaps emphasized a few too many times. Still, if early rhythm was less than ideal, it was in rip-roaring shape by the latter half of the play. The final scenes are a hoot; chemistry sizzles. What exactly is the over-under for arctic foxes in 2017 anyways?

Silicon Valley is an interesting and exciting place to be in 2014. The last time this much VC money was flowing was–dare I say–in 1999. Start-up “culture” is hot. HBO has a new show about it (called Silicon Valley of course). The human condition as it relates to the pursuit of the next big thing is an interesting animal. It can be incredibly humorous, alternatively perplexing, and ever fascinating. In Game On, San Jose Rep has given us a clever twist in its entertaining reveal of life here in a place we call Silicon Valley. This time, bugs are a laughing matter.

#GameOn @sjrep World Premiere! There will be baseball, venture capital & bugs. Only in #siliconvalley #CurtainsUp pic.twitter.com/wMm3JEaSPq

Dare you. For the record they taste like almonds, not chicken. #ExtremeFoodie #GameOn @SJRep pic.twitter.com/3Q2mCgNuvq