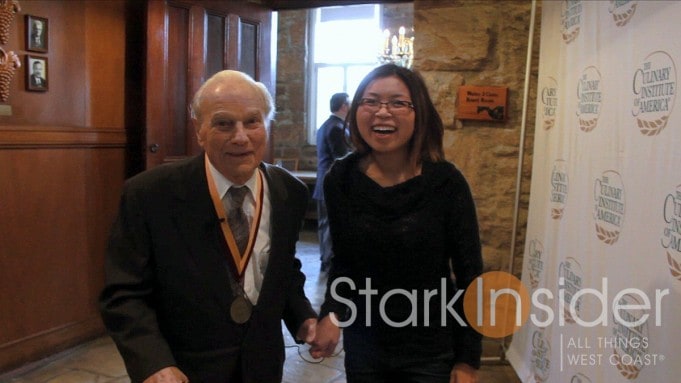 All eyes will be on Napa later this week when the Culinary Institute of America at Greystone hosts one of the wine world’s most important auctions. Known as Premiere Napa Valley (or PNV), the annual event features hundreds of wine tastings for trade, media, and buyers (many of whom fly in from around the world to sample lots, broker deals).

Every year wineries host parties (“Napa Gras” at Raymond is one not to miss – check this scene out – can JCB host a party or what?!), winemaker lunches, and soirees in hopes that they will move inventory. And just about every conceivable wine chotskie in the known universe will be graced upon anyone willing to pick up a stem and sip some young vino from a barrel. And why wouldn’t we?! To taste some of Napa’s best stuff, fresh from the barrel, while talking with the winemaker, is an experience that absolutely never grows old.

Promotional benefits accruing wineries and Napa as a region as a whole aside, there’s several important reasons to follow what happens at PNV.

The barrel tasting (takes place at the CIA Saturday morning each year) gives us a great opportunity to preview the latest vintage. Most of the wines are young, and still months away from bottling, but characteristics begin to reveal themselves early. Taste enough and you can begin to sense patterns. Wine media will later write about their experiences. Buyers will buy what they like (or think their customers will like) later at the auction. In aggregate, consensus will form about the vintage – with particular emphasis on ’12 Cabernet Sauvignon.

A BELLWETHER FOR THE FINE WINE MARKET

After the morning barrel tasting, an auction takes place upstairs. Here, things get paddle crazy. The PNV auction is equal parts serious business, serious fun. This year there are 225 lots (all of which can be sampled earlier in the day, straight from the barrel).

Lots usually consist of 5 cases (60 bottles) of an upcoming release. For example, one that caught my eye in the program guide: Lot #183 Mt. Brave, 2012 Cabernet Sauvignon, Mount Veeder. Made by the esteemed Christopher Carpenter (the man behind the Cardinale Cab that Steve Heimoff of Wine Enthusiast bestowed a perfect 100-point rating), the lot consists of 60 bottles, slated for an October 2014 release. My guess is this lot will do very well.

Last year the PNV auction brought in just over $3 million (the average bottle went for $160). That might not sound like a lot, but remember this is only for a small allotment of the overall Napa production – a drop in the spit bucket. Year over year results do shed some light at least on the overall market for fine wine. Later, when the merchants, distributors and other buyers head home, they make decisions based on what they’ve tasted, and follow through on discussions that ultimately result in contracts. The more positive energy coming out of the CIA on this day, the more we’re likely to see good sales action for Napa wines throughout 2014.

There’ll be plenty of hand shakes and hugs too.

Premiere is one of those times you realize that the wine world is actually quite small. On the outside–with grandiose expanses, never-ending rows of vineyards, wine magnates on magazine covers with arms crossed and dog at side–it can appear omnipresent. Nothing, though, could be further from the truth. And would’t it make sense that one of the world’s most important auctions take place in one of the world’s smallest wine regions? Napa is just 30 miles long, and 5 miles wide. This small dog has one heck of a bark.

It’s always a pleasure to see familiar faces, many of whom we at Stark Insider haven’t seen since last the last auction. Almost every winemaker I know is a wonderfully engaging chatterbox, and loves talking about their craft, their latest release, and the prospects for the upcoming year. And, yes, true enough, this isn’t the wine world per se. Not even California. This is Napa. But they call the Super Bowl winner–oddly enough–World Champions, right? That, I suppose if logic follows, would make the World Cup winner something like Universal Champions. And winners of the Stanley Cup? Masters of the Universe.

Anyone associated with PNV know it’s February when their inbox starts filling up with fanciful invites from just about every single Napa winery under the sun. The hardest part may well be trying to keep calendar sanity in check. So much wine, so little time.

Once again, Team Stark will be on location, covering the multi-day event. I’ll be tasting as many of the barrel samples as I can humanly do in one morning. Later, I’ll be looking for buying trends at the auction. Oh, I should mention, lunch at the CIA? Right, then, not too shabby at all.

We’ve been covering Premiere for a few years now and one thing I’ve noticed is that it’s gotten busier each year. Last year it was very busy (on premise parking is no longer allowed). The morning barrel tasting gets extremely crowded (and hot). Plus it’s loud. Chatterboxes, remember. At times it seems as if the room is one sip of Zin away from becoming a mosh pit. Those attending for the first time might be (pleasantly) surprised to discover that Napa is not the crusty, uppity kind of place they might have imagined. No, sir. In fact, Napa is precisely the kind of place where you might end up having a curvaceous Cirque-like performer hanging upside down from a rope pour you a sparkler while in a Studio 54-esque barrel room: