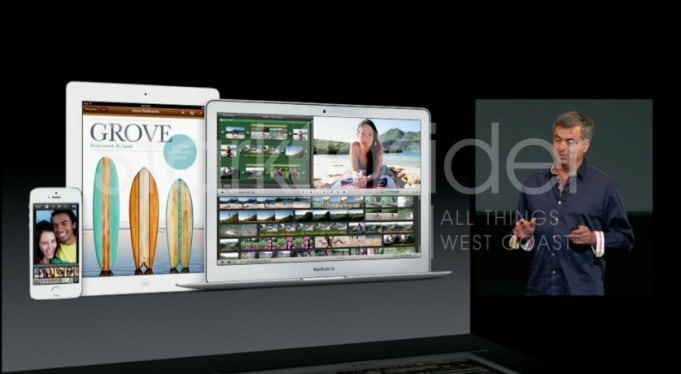 Apple put its best foot forward yesterday. I have to say: it was pretty impressive.

I’m still not about to back down from my assertion that Apple has yet to truly innovate post-Jobs (Apple and the Android Challenge). CEO Tim Cook refuted that strongly at the fall reveal that included moderately updated MacBooks, iPads and apps. “We are innovating,” he said. iOS 7, really?

But, setting aside the buzz, Apple merely did what we all expect any tech company to do year after year. And that is make products that are faster, lighter, cheaper. Moore’s Law trumps all.

There were no game changers, and there were certainly no products that defined entirely new product categories. Under Jobs that was defacto. In 2007 the iPhone – creating the smartphone category. In 2010, the iPad – creating the tablet category.

To be fair, 2013 has shaped up to be an incremental year in terms of tech innovation. Google played up color and personalization. With the Moto X Android smartphone you can customize it to your liking. The upcoming Nexus 5 will likely also be faster, lighter, (maybe) cheaper. So Apple alone doesn’t have a monopoly on lack of true innovation these days.

So are the refreshed MacBooks, iPads enough for Apple?

MacBooks continue to be the best made laptops on the planet. A few higher end models by Sony and Lenovo come close. But none can truly match the entire package–outstanding design, superb keyboard, best-in-class display, comprehensive software and services. Apple: the ambassador of the quan. I’ve been using a 2010 MacBook Pro daily, and am constantly impressed by its durability. That I haven’t had the need to upgrade (unlike my lust for all things Blackmagic Design) is testament also to Apple’s ability to build products that last. With the $0 Mavericks update things only get better, though possibly not for Microsoft. The updated MacBooks smartly bring more of the same. Why mess with a good thing? They run nextgen Intel Haswell and Crystal Well chips. They are now cheaper — the fact that Apple played up price cuts so prominently in the presentation is very telling. And they’re sleeker. Otherwise, they’re pretty much unchanged. There’s no touch screen nor is there any hybrid design as we’re accustomed to seeing over the last eighteen months with Windows 8-based devices.

Same story with the iPads:

Though I’m quite fond of the Surface, and Dell’s Venue 8 Pro, there’s no denying that the single best tablet on the market today is the iPad Mini. Hands down. Brilliant. Especially at the new price point of $299.

And that iPad Air?

Hmmm… where did I hear that name before?

So, yes, I called it, in 2010 no less (Why Apple Should Make an iPad Air). True, my thinking at the time was slightly different and probably informed more by a massive netbook hangover and less by a future of gestures, apps and tablets.

The iPad Air is gorgeous too. It will be a holiday smash. No doubt.

There were no amazing reveals from Apple. Then again, I don’t think there needed to be. This was Tim Cook relying on the running game. Pounding out three plays to get a first down. With Google also in incremental mode this year, there was no need to change what’s already working.

What about that Smartwatch?

Notably absent was an Apple iWatch.

On that I say, thank goodness.

I still believe Apple has executed the greatest head fake in all of tech. Samsung fell for it, and pretty much made a fool of itself in the process. This is what Newsweek said about wearable computing:

“A beer hat can be worn. It also can make it very likely you’ll spend New Year’s Eve alone.”

Yep. Google Glass. Smartwatches. I’m not convinced. There will be niche buyers for some of these. Sure. But it’s going to take a much more compelling design for wearable computing to reach the masses. I expect it will come; 2 years likely. Meanwhile I see these forays as mere experiments. Product testing. Consumer feedback loops.

Who couldn’t see that coming?

Apple delivered the final blow to Microsoft’s ancient shrinkwrap model. It’s been long dead. Surprisingly, though, 25% of its revenue still comes from Windows licensing. Ouch. That Xbox One better be a hit.

About 10-15% price cuts for best-in-class laptop. More power. Lighter. Not much else. But why mess with a good thing. For now Apple doesn’t believe that laptops need touch screens. They might be right about that.

A beast in Gucci stilettos. But I can’t help think that Apple is heading down the path of the Cube. Remember that? Style over function. Pros really value power and expansion. That could be an issue. At only 12GB memory is a joke by professional standards. The price, $2,995, is too high — but Apple is a premium brand, and the Mac Pro will be a bit of a fashion icon for musicians, video editors and photographers.

Who on earth came up with that brilliant, brilliant name. Oh, yeah, me!

Best tablet on the market. Powerful, travel-ready. Easy to hold. Now with Retina, as widely anticipated. Pricey, but, again, Apple can get away with it. Competitors have clawed Apple’s tablet share waaaay back: to about one-third of the market (from a peak of 80%+ back in 2010). I don’t think Apple (or shareholders) will care too much, so long as Apple can protect its profit margins by commanding premium pricing; we’ve seen this movie before.

I updated my 2010 MBP yesterday. All went well. I don’t see much difference. That’s okay, I like OS X pretty much the way it is. I use Google for web services (calendar, mail, cloud storage, etc.) so the Apple apps don’t carry much appeal for me. I only use Safari when I need to watch an Apple event. Still, the price for this OS is right (el zilcho). Tags looks handy. Otherwise this is the same old blazing fast and stable OS most adore.

A stellar job by CEO Tim Cook and the exec team. Personality came through. The reveals moved along well. Thankfully, no sugary gimmicks (like Samsung’s woeful variety show format). There was palpable pride. Best of all, everything–the products, software, services–came across cohesively. It all  made sense. No sharp angle turns. No head scratchers. Just a perfectly executed product announcement.