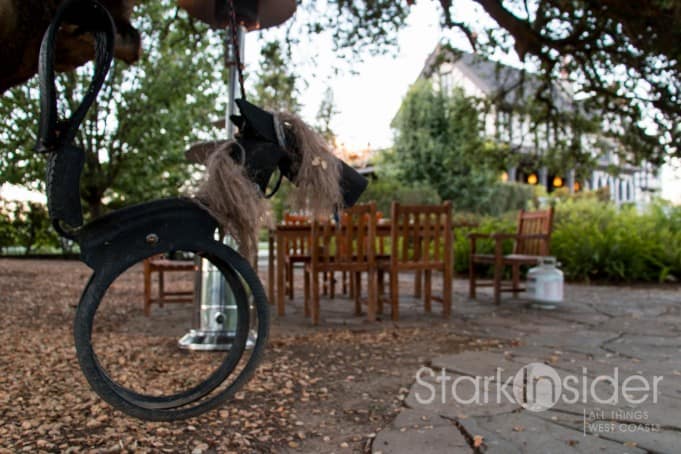 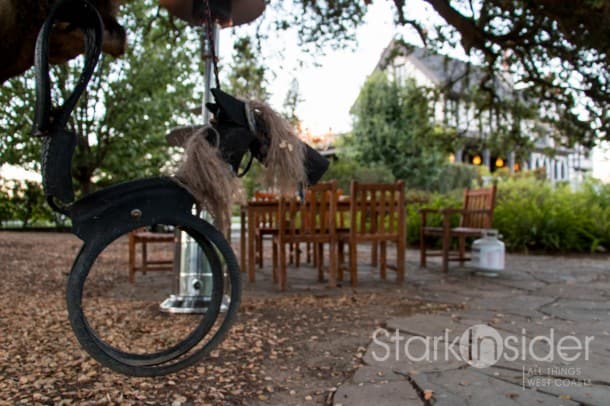 Those were those first words said by Ali Namdar, with more than a little infectious exuberance, to my eternal partner in crime Loni Stark when we arrived at the spectacular grounds of Kelly Porter’s Stonebrook Estate last night. As we quickly learned Ali is a gregarious, inviting person. Adored in white with a chic, blue striped jacket to match he was quick to spin a remarkable tale of international intrigue, while at the same time whimsically pontificating about art, California vineyards and Persian-inspired winemaking.

Located in the twisties just off highway 280 in the Los Gatos Hills here in Silicon Valley you’d be right if you thought this an unusual spot for a cult Cab tasting. Then again, with “cult” wines you’re never really sure what to expect.

Namdar’s project, a boutique 300-case winery with vineyards located in Lake County, is called Xurus, which, as he explains to us as the server brings on another way-too-tempting round of seared tuna sashimi on sushi and black sesame rice, means darkness to daylight. From evil to good. And that wine label? It’s anything but computer generated. Its borders, designed to give the label an oriental rug aesthetic, are actually painstakingly drawn by hand. Ah, yes, art and wine. It’s a precious combination. Stinkin’ wine stories? Well I’ll be damned.

It should be noted that all the while winery owner Ali Namdar was graciously chatting us up he was nursing a… Stella.

But this isn’t just about the wines–a tasting of the Xurus ’12 Sauvignon Blanc and Rose ($30 each), and ’11 Cabernet Sauvignon ($80) from the Sonatina Vineyard.

That would be the Stonebrook Manor estate itself.

If Bruce Wayne ever decided to take up residence in the San Francisco Bay Area this would be his sprawling, quirky Bat home of choice; though, to be sure, that pad with access to three wine caves at T.J. Rodgers’ Clos du la Tech in the Santa Cruz mountains might give it a run for the money.

This was my second time on the grounds. A few years back, my friend (and Stark Insider contributor) Eugene Lee held a recital here. Dining on the terrace that evening, I was reminded that there are many levels of “success” and credit-fueled “failure” in Silicon Valley. Regardless, one thing always remains the same: the laid back and casual camaraderie. Trust me. Hanging with crazy people might be interesting. But hanging with crazy people with money… well, that’s a whole different story. For this night at least, I was afforded a minute or two of that luxury. Out of the corner of my eye I was constantly scanning for security. When would they discover we had boldly, sort of accidentally stumbled upon this place?

Xurus doesn’t have a tasting room. Instead partners, and brothers-in-law, Ali Namdar, the writer, and Kambiz Safinya, the oil man, prefer to build up a small, loyal group of repeat customers. I was told that the operation is running at only 10% capacity, but can scale to just over 3,000 cases.

Yes, I name dropped Philippe Starcke earlier, only to drop the subject completely.

Actually, it wasn’t me that was mentioning names of legendary designers at last evening’s soiree. That honor, in fact, belonged to our host Ali–a man known to have written numerous children’s books, now attempting to shop an opera. Apparently he has an interesting rant that he chose to unleash at a tony party at some equally tony estate in Germany; details probably boring, blasé. Not knowing at the time that he was talking to Starck himself, so goes the story, Ali proceeded to take to the soapbox. Artists? Pfft. Not the smartest people in the world! They’re too concerned about broccoli! Ten minutes later, after the diatribe had echoed gloriously across those hallowed German halls, he would learn he had been talking to the designer and artist extraordinaire, Starck, who responded, “Of course. I know exactly what you’re talking about.”

Of the three poured on this evening, my favorite was the Sauvignon Blanc. Admittedly, I’m not a huge Rosé fan to begin with so discount my thoughts on that automatically. Meanwhile, the Cabernet Sauvignon came across like its actual age: young. That’s not entirely surprising. Some winemakers aim for a wine that is drinkable today. Others, such as I believe what these guys are doing with their Xurus label, focus on age-ability and collect-ability. I’d lay this one down for a few years. Decant it. And see if this puppy becomes a tad less sharp, and develops the layers that are surely afforded by that Lake County “mud.”

It should be noted that all the while owner Ali was graciously chatting us up he was nursing a… Stella. A Stella beer for goodness sake! What would Gina Gallo say about that. She, at least, knows how to tirelessly stay on PR/marketing point. I can only surmise that either (a) it takes a lot of beer to make good wine; (b) barley is truly mightier than the grape; or (c) “you shouldn’t drink into your profits.”