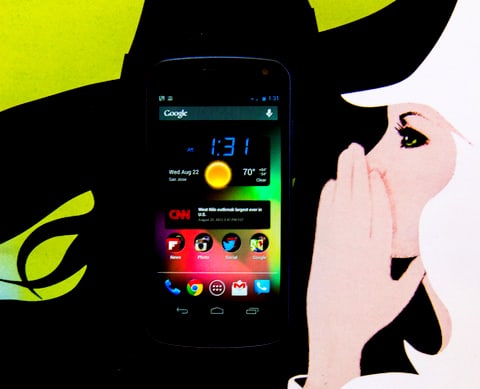 Many have asked if I think the rumored “Superior” Galaxy Nexus will woo iPhone 5 shoppers. Before I saw the specs circulating across the forums, I’d say probably not. Now that I’ve seen them, my response is definitely not.

As you know, I’m all for the little green robot. I went unlocked a few months back when I finally retired my trusty OG Droid (2009) and bought a Galaxy Nexus direct from Google (here’s a second look of the unlocked version, and initial review of the Verizon version). Then I popped in a T-Mobile SIM and have been enjoying unlimited (4G!) data ever since, with nary a hiccup – and all for only $30 per month. Quite incredible really. Don’t get me started on Android 4.1, aka Jelly Bean. It’s brilliant many times over, and Team Google have far surpassed Apple iOS in terms of innovation related to mobile operating systems. I can talk it up for hours. And, yes, it is indeed buttery smooth.

But the outlook for this stage of the mobile platform war could change next month when Apple unveils the iPhone 5 and iOS 6. Once again, we’ll all watch, mouths agape, as Consumer America crushes Apple stores like bone-wielding apes from 2001: A Space Odyssey. Behold the Monolith! Or maybe it’ll be like Space Balls this time.. and we’ll get a hologram of John Candy in full-on Barfolomew mode. “I’m a Mawg: half-man, half-dog. I’m my own best friend.”

Regardless of how the upcoming iPhone 5 turns out in terms of feature set, we all know all eyes will be on Apple, and the tech blogs will be in turbo-Wordpress mode.

All that to say: I’m underwhelmed from what I’m hearing out of the Android rumor mill.

Word is the next Nexus (GT-I9260), so far known as the “Superior” (ugh), will come spec’d out as follows: 4.65-inch Super AMOLED display (same as 2011 Galaxy Nexus), 1.5 Mhz dual-core A9 processor (marginal boost in power over the current 1.2 Mhz CPU), 8MP camera (versus 5MP – doesn’t matter to me, but I know this will be meaningful for many if the sensor’s quality delivers), and a microSD card (questionable this one given the absence of any expansion in past models). I have not seen any guesses related to battery size, but we can safely assume it’ll be in the ballpark of the Galaxy Nexus (1750 mAh).

It’s all well and good, but it’s far from what I’d expect out of a year’s worth of development and innovation. And let’s not forget this is all conjecture, and Google may yet have a Nexus trick up its sleeve.

Otherwise it appears that both Apple and Google are bringing their “B” games when it comes mobile innovation.

Then again, we could be entering the incremental era.

It would go against everything we know about Moore’s Law. But think about recent marquee product launches. The “New” iPad (3rd gen) was larger than its predecessor. The iPhone 4S did not dazzle with amazing new features as had previous models. Even “Mountain Lion” didn’t really seem like that big a deal. The new Samsung Galaxy Note 10.1 is sort of half-baked (though I’m smitten by its forebear, the Galaxy Tab 10.1). Battery technology hasn’t really changed much in what seems like forever.  And if a stylus is the biggest story of the year, then I’m afraid something is not right.

But back to my initial question: Will the “Superior” Galaxy Nexus appeal to would-be iPhone 5 buyers?

If there were any Apple buyers on the fence, they likely already made the jump to Android via the Samsung Galaxy S III, a beast of an Android that came out earlier this summer on all the major carriers.

Let’s also not forget the cultural aspect. I was discussing this very point with my Doctor of all people. Apple is the most valuable company in history for a reason. It’s been able to hard-wire a Great Pavlovian Nation. Try grabbing the iPhone out of my wife’s hands. Not a friggin’ chance in hell.