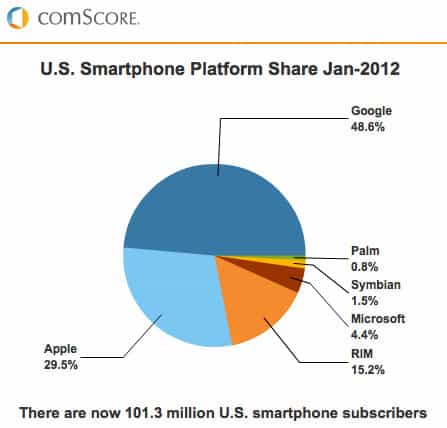 According to Comscore, Google Android took additional market share q/q and is still the top smartphone platform with 48.6% of the market for smartphone subscribers. Apple, which also saw growth in the quarter, comes in at number two with 29.5% share.

Decliners for the quarter (ended Jan 2012) include the usual suspects: RIM, Microsoft and Symbian.

Google runs headlong into the jaws of Cupertino with ‘Google Play’

In terms of mobile content use, text messaging is still the most popular use for smartphones, with 74.6% of users using their phones to send texts. However, with just under 5% q/q growth, the fastest growing categories are apps and browser which half of all smartphone users indicate they use on their smartphones. 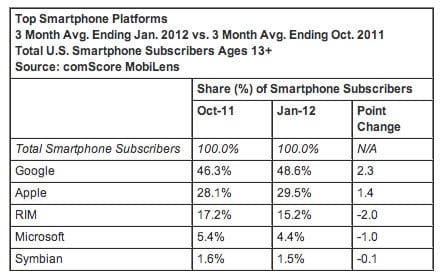 Google Android, with its open, multi-vendor approach continues to lead the market by a long shot. Apple, meanwhile, still holds almost a third of the market, and with its vertically integrated strategy commands premium pricing, and, hence, higher margins.

What to watch for: Microsoft Windows 8.

Microsoft has languished in the mobile space. That could change in 2012. With a unified OS in Windows 8 on deck, Microsoft will likely become the #3 player in the tablet and smartphone markets.

RIM: unfortunately, nothing has convinced me yet that their fortunes will change. — Clint.