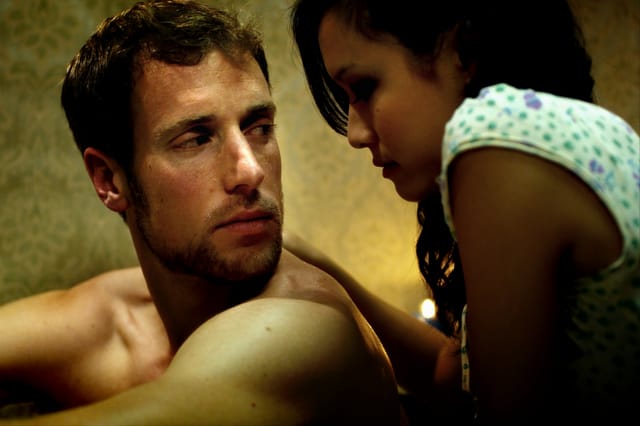 So that’s what they’ve been saying about me all of these years! Every time I walk into a nail salon (ah… as a sidekick that is) I wonder what the staff is saying. There’s a lot of giggling. Are they talking about me? I can’t know for sure, but in the indie film Touch, we get an inside perspective on life in the salon.

At the center of this love story is Vietnamese-American Tam, a quiet manicurist with a painful back-story. Brendan, an auto-mechanic with his own relationship challenges, comes by each day to V.I.P. Nails to get his hands cleaned – it will please his career-driven wife. An unlikely romance blossoms. But are these two destined to be together, or is this merely an avenue to further their understandings of existing relationships?

First time director Minh Duc Nguyen (UC Berkeley) employs an affectionate eye towards these characters. Often it’s what’s left unsaid that matters most; his lens is patient, allowing us to get up close, sometimes painfully so. In particular, scenes between Tam and her ailing, angry father give the drama backbone. She visits him and he scoffs, bemoaning her life decision to become a manicurist. He and his wife worked hard to bring her over from Vietnam and this is all she’s become – why not a doctor, a lawyer, he asks. When she later helps him in to the shower, Minh (who also wrote the screenplay) frames the shot artistically, intensifying her isolation, anguish.

There’s a familiar premise regarding who will end up with whom by film’s end. The dialog is powerful and interesting enough, though, to keep us guessing, and enjoying the journey as each of the characters reveal more of themselves.

The film was shot on RED, and it shows. The shots (Morgan Schmidt, cinematographer) have a quality that belies the indie budget. I would cut out 10 minutes, and tighten the backend slightly – but I know that’s easier said then done, especially considering many of the shots look so striking on the big screen.

Watch for Touch to premiere at Cinequest (preview) next month. It’s an impressive feature debut by a skilled filmmaker with some surprising, nuanced performances in its two lead actors Porter Lynn (debut) and John Ruby.

Note regarding the name “Touch”

If you’re searching IMDb for more information on this film use this link which will take you to the correct entry. Unfortunately the title is common and there are several entries. I wish Minh would’ve considered an alternative name, as it can make it difficult to find information about the film, and, worse, create confusion. Regardless, these are the challenges of indie film, and achieving such a remarkable result first time around is reason enough to make the effort to search out a screening.

Screens at the Cinequest Film Festival in San Jose