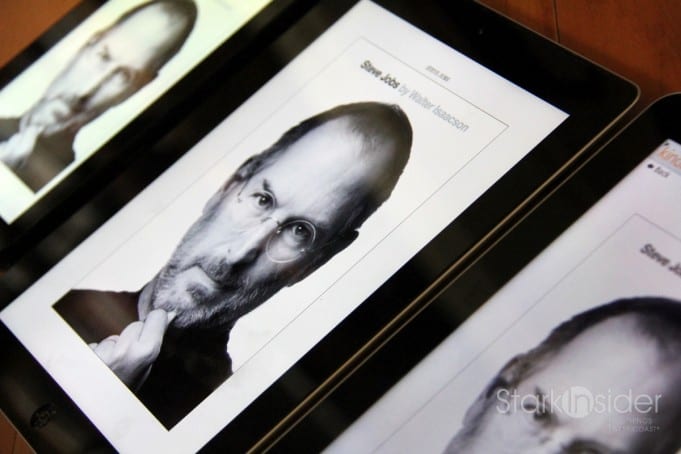 Does Steve Jobs look best on the Apple iPad? 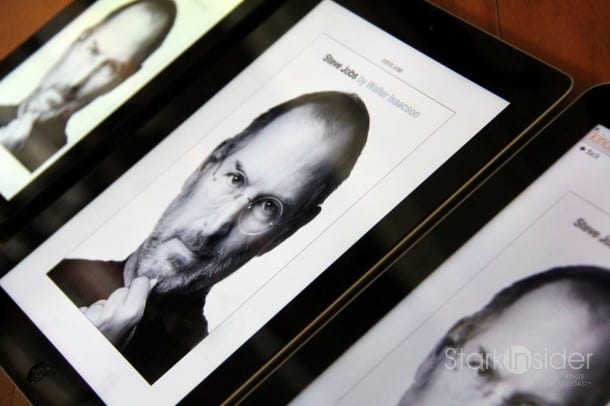 And by that I am, of course, referring to Walter Isaacson’s great biography of perhaps one of the most confounding personalities in history. I wanted to know how reading the book compared across a bevy of devices.

Recently, on the way back to Silicon Valley from Ottawa, where we visited friends and family for the holiday (including a two day excursion to Toronto to visit the inlaws), I found myself trapped at the Ottawa airport. All told–long story!–it took 25 hours to return home. Meanwhile I found myself with lots of time to explore the Samsung Galaxy Tab 10.1 (my favorite tablet for travel) and make several visits to Tim Horton’s and Harvey’s. But I wanted to know: which e-reader or tablet provided the most pleasurable reading experience?

So I downloaded Steve Jobs from the Kindle store for $14.99 and sent digital copies to four devices:

The Kindle is the pure e-reader of the lot. Its e-ink technology produces the sharpest display, and, according to many, should result in less eye fatigue over extended reading sessions. But does that mean it would be the hands-down best device for reading a book?

Also, this comparison revealed subtle differences in the Amazon Kindle app itself. On the iPad, for example, you get a dramatic page turn effect. But not on the Android version of the same app. Using the 7-inch Galaxy Tab felt more comfortable, akin to holding a paperbook. The trade-off is a smaller display.

You can’t buy books via the Kindle app on iPad. Amazon instead wants to circumvent the 30% Apple mandated in-app fee. As expected, on Android the buying experience is integrated; you don’t need to jump into a web browser to buy the book as you do on the iPad. A comparison of “markets” could be an entirely different comparison. I found the cheapest copy of Steve Jobs on Amazon, which at $14.99 was also the same price as iTunes. Oddly Google had the same book going for $17.99. All were far cheaper than the physical hardcopy selling for twice the price at the airport bookstand.

To the results then. Here’s how I ranked the four devices, in order of preference: 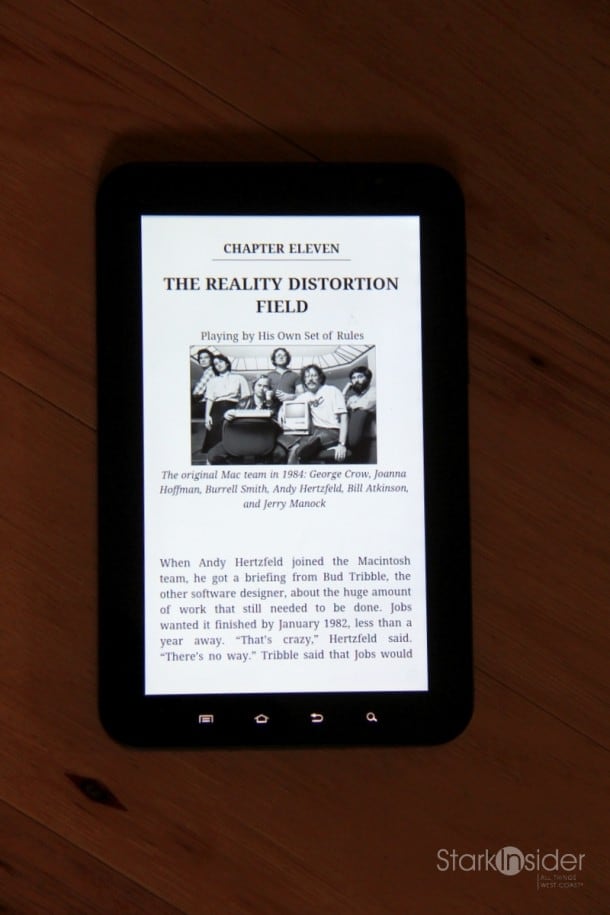 I was surprised to discover how pleasant reading a book can be on the original Samsung Galaxy Tab 7 (still running good ‘ol Gingerbread). Like the Kindle, it’s easy to hold in one hand. The text is easy to read, and adjustable. A simple touch (or swipe) advances the page almost instantly. Like the other tablets in this comparison, the Tab doesn’t require external light. On the plane I didn’t need a reading light. Those reading outdoors, on a sunny beach for example, will find their only choice to be a Kindle or Nook e-Reader. But for indoor use, I found the Tab 7 just right. The whites on its display are better than its larger 10.1-inch brother which yields eye-pleasing contrast. I’m not sure a vigorous reader will chose this tablet as their daily reader. But for an occasional read, like when I wanted a walk down Cupertino memory lane, this is my top pick. If I were to buy it again, it would be the $199 Amazon Kindle Fire, which is essentially the same thing: a 7-inch Android tablet. 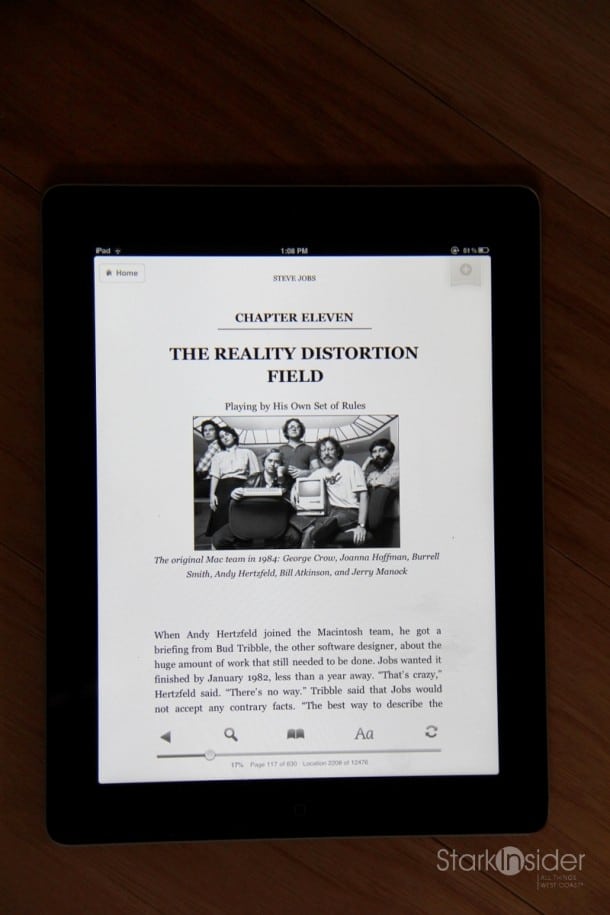 Want whizbang? Look no further than the iPad 2. You get the slick page turns (which my wife particularly likes “oooohhh…. ahhhhh….”) and a large display. But you also get heft, in comparison to the lighter Kindle and Tab 7. If you’re reading for extended periods, you’ll notice the weight of the iPad 2. On a plane, leaning on a stand or against the tray table helps lessen the load. Contrast is decent. The fonts–ironic given its starring role in the Steve Jobs bio–are just OK, and reveal some weakness on the iPad’s display. Compare it to a Samsung Galaxy Nexus smartphone and you’ll immediately note that it’s time for Apple to roll out a highres Retina display for the iPad. A huge advantage of using the iPad as an e-Reader is that, like its counterparts, you can take a quick break, check email, read some headlines, surf the web, etc. It’s a welcome diversion. Then, you can jump right back into your book minutes later, and never miss a beat. 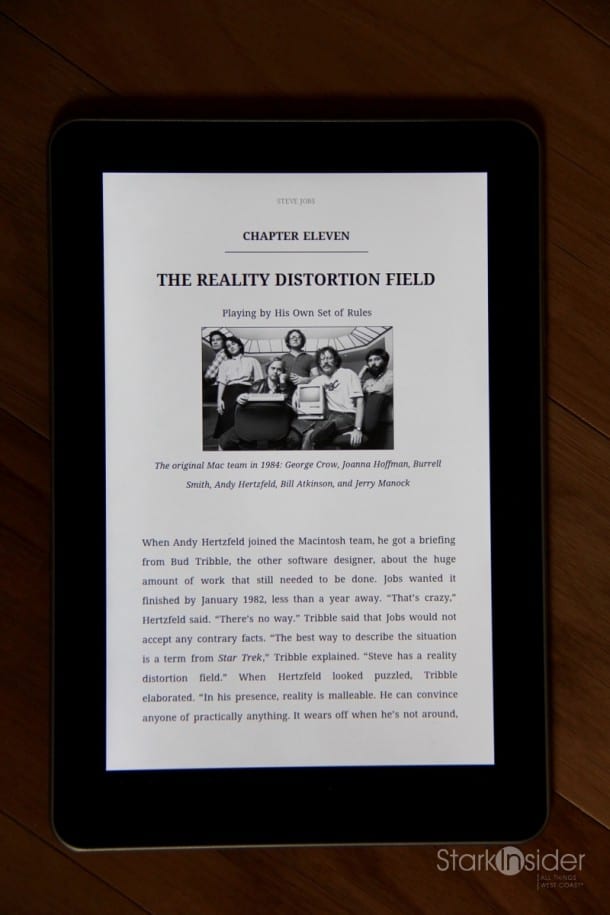 I admit: I love this tablet. The Samsung Galaxy Tab 10.1 is a beauty. It’s elegant, and feels far better in my hands at least, then does the Apple iPad. Sure, it lacks apps. Maddingly so. Where is Flipboard? How about a decent Twitter client? Want a slick digital magazine experience? Forget about it. I will always read BusinessWeek, Digital Photography, The Atlantic, etc. on the iPad. Still, I really like the much maligned Honeycomb OS. When you hold the Tab 10.1 in portrait mode you might feel as if you’re in Europe. The widescreen layout of the device is best suited for landscape mode where it sits comfortably with two hands. Reading reminds me of A4 paper. Not to worry. I read the most of Steve Jobs bio on the Tab 10.1. When we travel, my wife uses the iPad, I–Android superfan and all–use the Tab. When I arrived back in Silicon Valley, though, I did prefer the smaller 7-inch form factor of its smaller, aforementioned brother. 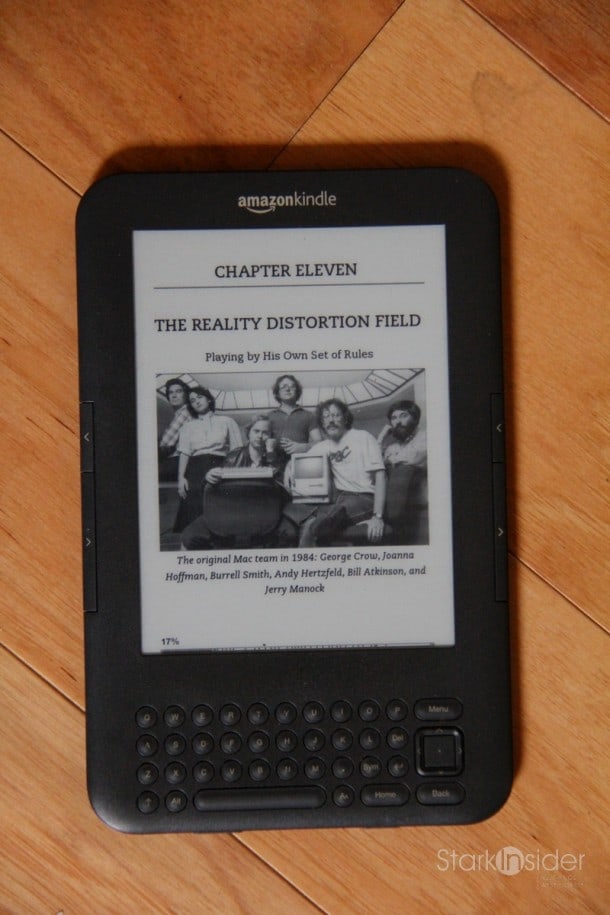 What?! Kindle… last place?! Yes, true enough. For a few reasons. One, the Kindle (7 features to die for) needs external light. So if you’re reading in bed, or on a plane, you won’t be able to sit deviously in the dark while you learn about buddha, the intersection of arts and technology, and RDFs. Another thing I don’t like: the clickable page turn buttons. They click. And it’s distracting. Also, the page momentarily inverts during page turns–blacks become white, and vice versa. Because the world we live in is just one big gesture waiting to happen, I kept finding myself trying to tap the screen. Using the tiny keys at the bottom is a kludgy experience at best. One thing can’t be denied though, and that is the quality of the screen. It’s superlative. It looks like real ink. So much so that when we first opened the Kindle I thought the welcome note was a plastic label.

My ideal device would combine the e-ink technology of the classic Kindle (not the Fire) with a hig-res, soon-to-be-released-on-iPad 3 Retina display currently found on the iPhone 4S.

Regarding the Amazon  Kindle app itself, it’s a winner. The sync worked perfectly. If I read on the iPad 2, and then switched back to the Galaxy Tab I was prompted to advance to where I had left off. Downloading the book itself took less than a minute.

I’m half way through Walter Isaacsson’s bio of Steve Jobs. It’s an easy, entertaining read. There’s a lot of familiar material (the short-lived Scully/Jobs lovefest), but a lot of revelation too (future of Apple, and Jobs’ perspective on Google).

Back in 2000 I tore through a bunch of books about Apple- reading anything and everything related to my favorite childhood company (including a self-aggrandizing, contradictory, campy account by former CEO Gil Amelio). Growing up, I had an Apple ][+, then a //e, before we went “bit map” with a 128K Mac, shortly to be replaced with a Fat Mac, and followed years later by a color LC. In between I assembled PC clones in the 80s at a computer store (“Mr. Diskette”) downtown Ottawa. It was my first lesson in end-to-end manufacturing. I’d slap together the components into a large, generic case. Then I’d price it ($1,999 or $2,499 with 10mb hard drive) and sell it hours later on the retail floor. Clones being clones back in the day, I’d don a lab coat, and greet returns at the service counter. Repair was easy. Problem with graphics card? Rip it out and put in a new one.

I loved the dawn of the Graphical User Interface. Of course, there was the Mac. But there was also GEM (on Atari ST), Workbench (on Amiga), Windows, OS/2 and scores of others. At one point I started to develop a GUI for the Apple 2. None existed then. I spent days coding the thing, and actually had a nifty green-screen prototype that used a joystick for navigation. It even had primitive window layering and a way to see files on a floppy. My triumph was short-lived. After one blurry eyed programming session I inadvertently deleted the program. With no backup my potential to impact the world came to an abrupt, curse-filled end.

I remember rummaging after hours with my friend Zarko who worked at Bell Northern Research. We’d seek out the Lisa sitting on someone’s desk and play with it for hours. Years later we create the modem spoof game at computer camp during summers. We’d tell the campers we were dialing in to a super know-it-all mainframe. Once connected, you could type any query and get an all knowing response. Like, “What license plate is on Clint’s AMC Gremlin?” Little did they know I was upstairs on an Apple ][ typing the  answers via modem connection. We created a script so the answer appeared on the receiving terminal in machine-like flow; disguising my slow, inconsistent pace on the keyboard. Then there was the Killer Clown… ah, okay, another story for another day.

What’s most interesting about this bio so far is that Steve Jobs appeared to learn most when he failed, as he did in “Act II” with NeXT. Some might argue this venture–a high power computer targeted at the education market–wasn’t exactly a failure. Though the company didn’t generate much revenue, it did generate one monumental sale: NeXT itself was sold to Apple for $429 million in 1996. The nextgen OS, along with Jobs’ return would set the stage for Apple’s remarkable comeback.

Isaacson is particularly skilled at capturing the essence of the famed “Reality Distortion Field” – it’s used almost as a glue of sorts, and runs throughout the chronicle (at least so far). It may be the best written account of the inexplicable alternate universe Jobs was capable of surrounding himself and others with- much like a modern day cone of silence? Other books about Apple do a better job of dissecting not only management decisions and the events that led to Jobs’ ousting, but also his return and the successful product simplification strategy (remember, the quadrant Jobs used to communicate the new vision?).

In 2010 I had the good fortune to meet Steve Wozniak. I wrote about the experience here on Stark Insider. We were covering the grand opening of a new exhibit at the Computer History Museum in Mountain View and we were invited for a special media tour hosted by none other than the legendary Apple co-founder. What I discovered on that day was thrilling. Not just the history of computing, but that Wozniak was, true to all reports, an incredibly humble, intelligent, genuine person. He spent almost half an hour with us, and he talked, talked, talked… as long as technology was the subject, Woz loved to talk. GPS, Google, Android, iPad. We covered the gamut in a short period of time. And, yes, we talked about Jobs too.

Here’s the video I shot on that day: