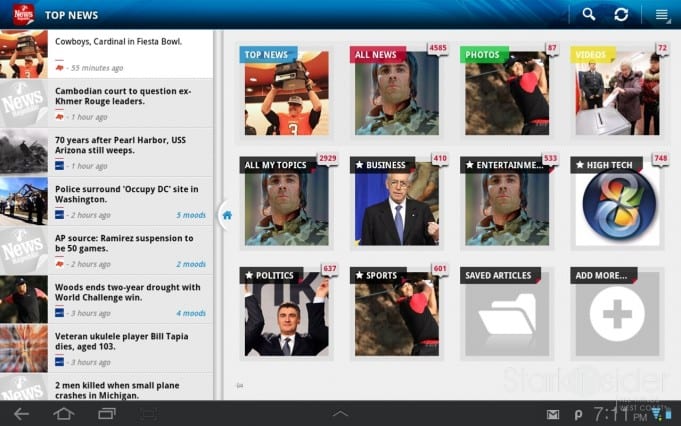 Mobile news discovery and RSS apps continue to be a hot category (see the Stark Insider round-up of iPad and Android news apps). Today, Mobiles Republic announced it has struck a deal with Lenovo that will help it compete with competitors such as Flipboard (not yet available on Android), News360 and Yahoo’s Livestand.

News Republic is a free smartphone and tablet application that aggregates news and video content from numerous top-tier news sources (including SI) and delivers it to users based on their own topical preferences.

While we haven’t been given a lot of details as of yet, we do know that News Republic will come pre-loaded on four Android-powered tablets from Lenovo, currently the #2 manufacturer of PCs.

“Pre-loaded” can accrue significant benefits to a vendor. In this case, Lenovo tablet buyers will automatically see a News Republic icon on their Android tablet screens. Competitors such as News360 and Evri will require a download, putting them at a possible disadvantage, at least on Lenovo tablets.

Lenovo, however, has yet to prove themselves in the tablet market.

Outside of the Apple iPad, Samsung, with its relatively popular Galaxy Tab 10.1 tablet and Amazon with its new Kindle Fire, continue to earn the most consumer interest. Meanwhile, Asus is making waves with its slick hybrid “Transformer Prime” tablet that can convert into a pseudo-laptop thanks to an optional keyboard dock. (I continue to dream that Apple will make an “iPad Air” in 2012)

News aggregation and “curation” are big deals. Gone are the days of editorial-based newspapers. In this socially-connected era, recommendations and crowd-sourced content are the order of the day.

As far as I know Mobiles Republic is one of the first vendors to have their app (News Republic) ship out-of-the-box with a tier 1 vendor (Lenovo).