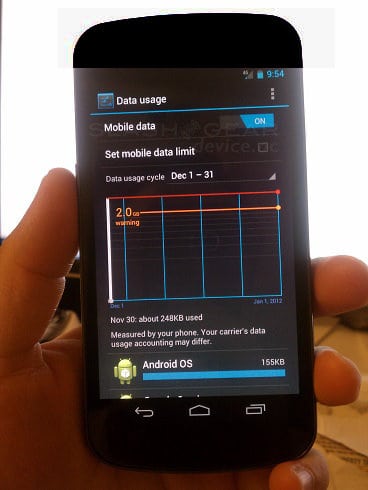 I was a lonely soul
I had nobody till I met you
But you keep-a me waiting
All of the time
What can I do?

Here’s what we know. Samsung Galaxy Nexus, the most talked about Android handset ever, is already shipping in the UK. It arrives in Canada on December 8. And the US: ? Still unclear. The latest rumor has it shipping via Best Buy on December 11. Adjust your lives accordingly.

As I’ve written before, it continues to amaze me the fog of war surrounding the Nexus launch. At least the volume bug will be fixed for us laggards. And, better yet, if these photos on Slashgear are accurate we’ll be (thankfully) able to immediately disable all that Verizon bloatware.

Frustration levels mounting, many have told us that they’ve already jumped the gun and purchased either an HTC Rezound or Motorola Droid RAZR. Both respectable, and well reviewed devices. Neither, however, ship with Android 4.0, aka Ice Cream Sandwich (ICS), Google’s latest and greatest mobile OS. Then again, those buyers can look at the upgrades their handsets will likely receive in Q1 2012 as a New Year gift, reinvigorating their by-then ancient smartphones–why do Android vendors release so many devices, so rapidly with such minor improvements?

Also, some have criticized the RAZR display.

I remain on the fence.

Originally I wrote about the upgrade dilemma facing us OG Droids from November 2009. We bought in early to the Droid vision, and now vendors are lining up for our upgrade dollars and loyalty. I racked and stacked the RAZR, Rezound and Nexus Prime in a comparo and discussion. Over the course of a few weeks I narrowed the choice, and the Nexus emerged the winner, primarily due to ICS–though, NFC is a nice bonus too, as is the curves of the phone itself. Reviews have been generally positive (CNET) to outright lowing (The Verge). Some, though–Apple Fanboys disguised as “fair and balanced” neutrals–have not been so kind. One reviewer compared Nexus to the iPhone 4S and came away unimpressed.

With all these delays, I began to capitulate. Either I’d buy a RAZR like so many have already done, and life would go on. Reports of abysmal battery life (half a day?!) primarily due to the drain that is 4G LTE caused me to rethink that decision, as much as I’d like to buy American, and as much as I’d like to stick with Motorola.

My other idea now is to wait for the new-new super uber flagship Android smartphone that will likely ship in Jan/Feb (okay, so it won’t be on Feb 30th after all…). Guaranteed it will hit, and there will be a fabulous 2012 New Year’s campaign attached to it that will induce more frothing among us Androids.

Regardless of how this plays out and when Nexus ships, I’m still amazed at what trusty Moto Droid can do even though it’s over two years old now. Google Navs is a routine savior, getting me around the Bay Area with relative ease (traffic is the bane of Silicon Valley). Here’s a slightly worn smartphone that can run Nav, Gmail, and Google Music all at the same time. And I can still easily switch to Facebook, Twitter, Yelp or anything else with nary a hiccup (but with minor delay). That’s testament to the openness and robustness of Google’s astonishingly powerful mobile OS.

Samsung/Google/Verizon – 5 Ideas for a Better Launch

I’ve jokingly called them The Three Stooges when it comes to the Nexus launch. Here’s 5 simple ideas on how to get it right, and build customer loyalty, not frustrate legions who could potentially jump ship to Apple.

2. For Google: hold 2 major Android launches per year. One focused on smartphones, the other on tablets. Only announce major Android releases at these two events. Put the energy into high profile features- not specs.

3. Pre-orders… where are they? Build demand online, and reduce potential for lost sales.

4. Communicate with your customers. Early OG Droid buyers from Nov 2009 in particular should be revered, loved, coddled by you. Yet I get better updates, better treatment from Apple–yet, I’ve never owned an iPhone.