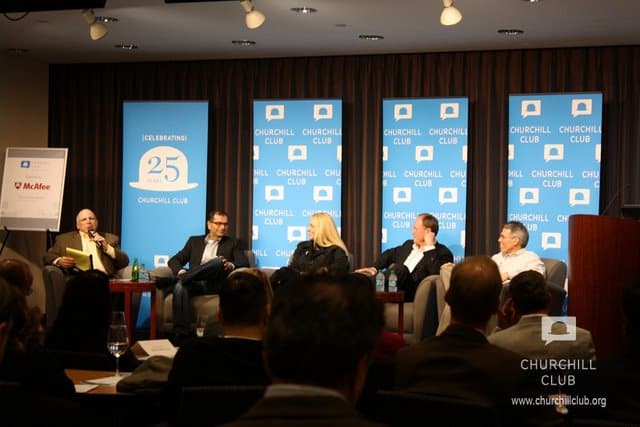 It’s not often you get four financial leaders into the same room, representing ~ $45B in tech market cap. But that’s exactly the case last night when I attended yet another compelling Churchill Club event here in Silicon Valley. The CFOs in question, Deepak Ahuja of Tesla Motors ($2.3B), Anna Baird of McAfee ($11.5B – Intel’s acquisition price), Steve Gomo of NetApp ($18.8B), and David White of NVIDIA ($12B) were on hand as part of a roundtable to discuss 2012. Among the themes: change of pace in the financial world, connected-ness (again that concept!), cyber-security and the hacker or “WikiLeaks” threat, and their roles in guiding corporate strategy.

The event also marked the first time I can recall hearing “lingerie design” used in the introduction of a CFO. And you thought financials were boring?

Turns out the parents of Tesla CFO Ahuja are in the business of lingerie design and manufacturing. Now he works at one of the coolest car companies on the planet, with a very charismatic leader in 40 year-old CEO Elon Musk. Still, try as he might, Brenner could not get any dirt from Ahuja… “What is it like to work with such a dynamic CEO?” Brenner pressed. Ahuja admitted that his CEO does evoke love/hate reactions, but “In person he’s in fact he’s a very unimposing person. He actually talks very little. He actually listens a lot. So when he talks, we listen.”

Okay, so there might not’ve been #tigerblood spilling over during the conversation that ensued, after all these people are the one’s who normally make an appearance after a “forward looking” disclaimer. That doesn’t exactly warm-up the crowd. But Richard Brenner, President & CEO of The Brenner Group certainly did, and was a lively, rapid-fire moderator for the evening.

As a marketing guy, I’ve spent my fair amount of time trying to convince my CFO the value of marketing, and hence the need for… budget. How many of us have walked away from these meetings bruised and battered only to see the CIO and VP of Sales walk away with the lion’s share of budget? My favorite memory in the last 17 years here in the valley was when I presented a North American marketing budget to my boss in Tokyo. I awaited reaction. Approval. Challenges. Anything! This is what he said: “Yes, you don’t.”

Some good news for those that hope for more recovery in 2012. In a vote at the end of the session, three out of four of the CFOs gave a thumbs up to the economic prospects for 2012. No one gave a thumbs down, although NetApp CFO Steve Gomo gave a neutral vote (along with moderator Brenner). If I were working for the NY Post I might say 3 out of 4 CFOs say the economy will improve in 2012. However, probably best to draw your own conclusions.

I should note before I summarize the sound bites for the night, that I noticed that CFOs like to do two things: (1) hold microphones sideways; and (2) refrain from using colorful analogies or metaphors.

* Disclaimer: I’m almost certain the many CPAs in the room would have a completely different take on the events that transpired.

Highlights from the CFO Roundtable 2012:

1. On the expanding role of CFOs and business strategy  (where to invest capital, product mix, overseeing divisions such as HR and IT, controlling costs)

DW: “The environment is much more regulated then the 70s.” Need domain experience. The bar has raised over the decades but the message is the same. His line description of the CFO Role at NVIDIA, “It should be boundary-less.”

DA: Pace of change increasing. “I describe the CFO position as not Chief Financial Officer, but as Chief Filling Officer. I find where the weaknesses in the company are and plug them.”

AB: “It’s the glue that helps us execute.”

SG: “I think the role of the CFO has not really changed. Keeper of the business model, manager of capital allocation… and ultimately the chief compliance officer.” Regulatory + speed has changed. But the fundamentals are the same.

2. On terrorism/WikiLeaks and the risk of hacking to finance and information…

SG: “It is a new complexity that you have to deal with.” — it’s a level of risk that didn’t exist before because mass communications didn’t exist like they do today. “I’m not sure you’ll ever solve the problem…”  He recounted the Nov 2010 story (Nov 2010) where Bloomberg News accessed an unprotected area of NetApps web site to leak earnings early. It upset the share count and resulted in share sell-off.

DW: “We have employees all over the world… at home… and yet we want to provide information that is secure.”

DA: As CFO of newly minted company, and hacker concerns. – on working with one of most dynamic CEO in the country “It’s an amazing experience.”

3. On the relationship between CEO and CFO…

AB: “Truly a partnership. In the end you’re facing the investing public.”

SG: “The CEO is still the one who ultimately makes the decision.”

4. On incorporating new ideas into the financial process…

DA: “At Tesla we’re in a state of execution. Heads down. Getting a new car out.”

NetApp recently transitioned founding CEO (who grew the company from less than 20 people to $3B+ revenue) to a “professionally trained” CEO (Tom Georgens). According to Steve Gomo, it has “gone extremely well.” Then he suggested that the executives are like a team. It’s the “best of times, worst of times”. But, he notes, if you really want to learn about someone’s character, watch how they react when times are crummy… everyone is good when times are good…

SG: “I’ve never seen an industry where one week you’re a leader, and the next you’re a laggard… there’s an industry that thrives on that: it’s called Venture Capital… they look for disruptive technology.”

6. Does the CFO need to be an accounting technician?

DW: “He or she has to rely on good organizations … for domain expertise.” “They need to know where to poke and challenge.” “Why are we pricing a product this way?”

SG: “A CFO needs to know what questions to ask…. you have to know what’s important and what’s not.”

SG: “M&A experience is going to be at a premium.”

DA: “How do we bring manufacturing back in the US?”

3/15 “Innovating our Way Back: How Will Technology & Innovation Create the Next Big Thing for American Businesses and Workers?”