One of the most entertaining points made at last night’s Churchill Club panel in Silicon Valley on wireless technology was related to mobile gaming. Paul Jacobs, the likable, folksy (think John Chambers) CEO and Chairman of Qualcomm admitted that for reasons that he can’t explain, he finds himself compelled to play solitaire on his smartphone, sometimes for hours on end. I’m sure he’s not the only one, but I wonder what his e-staff thought, sitting at a table just a few feet away from the stage in a hall at the Fairmont Hotel. It resulted in plenty of laughs, and brought to a close an occasionally informative evening full of technical exposition, acronym gymnastics and passionate story-telling.

Kara Swisher, co-executive editor (along with Walt Mossberg) of AllthingsD.com, moderated and pleaded to Dr. Jacobs, “We can’t end the evening on solitaire!”

The other panelist, former Palm CEO, now HP-exec Jon Rubinstein reminisced about the early days of the Treo (possibly the first real modern-day “smartphone”), “Chances are a lot of you in this room had one,” he told the sold-out room of over 400 executives and tech enthusiasts. “It was a high volume product.”

Like I mentioned yesterday, wireless is huge, and I suspect that’s indeed no revelation. We are mobile. Computing is mobile. We are no longer strapped to desktop PCs. We love apps… a lot. And increasingly, we are willing to give up privacy — telling Google Maps, for example, where we are located or checking in very publicly with Foursquare to a local wine bar — if it makes our lives more convenient or fun. All of these topics and more were covered at the 90-minute event.

But one thing was conspicuously absent at this panel: the Big Idea.

Rearview Mirror vs. the Crystal Ball 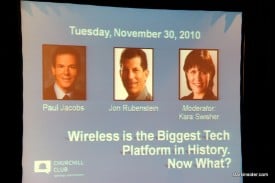 It proves that once again, especially when it comes to technology, it’s always easier to talk about the past than to predict the future. And expectedly so. Unlike, say, the NFL, where you know the rules and league will essentially remain the same for the coming years, the world of tech re-invents itself at least two to three times per decade. Don’t forget, Groupon went from zero to $6 billion valuation in only two years. Social Networking was something you did face-to-face even in the mid-2000s. And the era of tablet PCs thanks to the iPad has just begun, here in 2010.

So it was a bit unfair to expect either Rubinstein or Jacobs to land any prognosticating hey-makers. In fact the best we could get last night was “more features, faster performance” … “the roadmap is there” … “always-on phones” … “packing more MIPS into the chips…”

Mobile Gaming and Sexting at the Apple Store

Some of the best lines of the evening actually came from Swisher, who’s cheeky style pushed the boundaries just enough to keep the execs on their toes. In reference to the early days of mobile she suggested that “Tetris was the Angry Birds of its day.”

Then there was her amusing bit on running into sexting teens at the local Apple Store. Seems that somehow distracts from the shopping experience. Or how about the time “the twelve year old” that invented Google Goggles snapped a photo of a glass of water. See, it’s a glass of water! Ah, good times in Silicon Valley.

Jon Rubinstein stated that “our lives are moving into the cloud.” Later he questioned the reluctance of some to store data in the cloud. “Where do you think banks keep your money?” 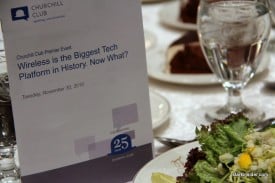 One issue that “must be addressed” is the lack of good battery life (I full-heartedly concur!). Why is it, the panel wondered, with all of the technology and capability available that we only get an incremental 10% improvement each year. It’s a hard problem to solve. “It’s chemistry.” said Rubinstein.

On Competition: Android, iOS, Nokia, RIM – how many is too many?

Kara noted that she’s not “Highlander” when it comes to mobile OS offerings, implying that there will be more than one, but suggesting that something like seven may be too many, resulting in consumer confusion.

Rubinstein, whose WebOS is now owned by HP has 1.3% smartphone OS share (Nielsen, October 2010) conceded that “Android and Apple are going gangbusters. The question is who will be #3.”