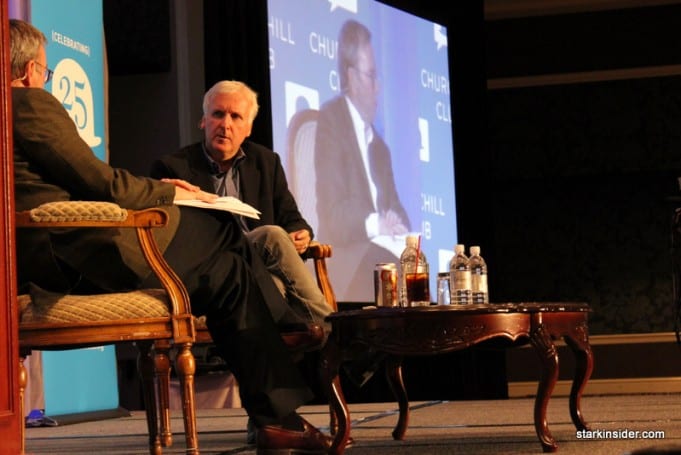 James Cameron was in town to help kick-off Churchill Club’s 25th anniversary. Eric Schmidt, CEO of Google, moderated a lively discussion that covered everything from film-making and the environmental crisis, to ocean exploration and the 99% perspiration behind most geniuses. And even Cameron’s Canadian roots.

Schmidt noted that the most successful film-maker in history had achieved the American dream: arriving as an immigrant from Canada, taking a job as a truck driver, before eventually working his way up the Hollywood ladder.

Eager fans looking for tips about Avatar 2 or 3, sorry to report nothing new on that front. However, the technorati will be interested to know that Cameron — Jim as the sold-out crowd at the Fairmont in San Jose liked to call him during a rapid-fire, interesting Q&A — does want to shoot at a higher frame rate. He alluded to current limitations of film notably the antiquated 24 fps standard. Avatar 2 is likely to be shot at 48, 60 fps, or possibly even higher. Always the innovator, expect state-of-the-art.

More to come on the story tomorrow, including a video, along with some of our favorite quotes from the evening.

Note that watching Cameron & Schmidt in conversation is the opposite of Hannity & Colmes. Facts, information, and science, thankfully, all come to the forefront.