No large, tightly connected system can be made safe. 930,000 derivative contracts remained outstanding when Lehman Brothers went bankrupt. In 2009 Susan Boyle’s rendition of a Les Mis song circled the globe twice… before she even finished singing it.

These are just some of the ideas and examples that arose at a lively event hosted by Churchill Club in Silicon Valley.

And so, the question remains:

Geoffrey Moore, author of the tech marketing classic Crossing the Chasm and managing director at TCG Advisors, moderated a lively, rapid-fire 60-minute conversation with Bill Davidow, founding partner, Mohr Davidow Ventures to explore the unintended consequences of the connected age. While at Intel, Davidow served as SVP of marketing and sales. He sits on the board of several companies including Rambus, and FormFactor.

The evening generated thought-provoking discussion about big ideas and system-level concepts; as in financial systems, social systems and political systems. Moore is a lively moderator (and enjoys his Sierra Nevada) and kept the pace brisk, just enough so that we could scratch enough of the surface on a variety of ideas without stalling.

Unlike the past two events we recently covered (Film Director James Cameron with Google CEO Eric Schmidt, and Qualcomm CEO Paul Jacobs, HP excec Jon Rubinstein with Kara Swisher moderating), this one required a keen focus to follow trains of thought, hypotheses and various threads of logic. But it was worth the effort.

Davidow’s premise that “no large, tightly connected system can be made safe” has several far-reaching and dramatic examples. For one there was the financial collapse of 2008 that was in his estimation driven primarily by excess speculation. “In 2000 value of derivatives is $60 trillion,” he noted. “By 2007 over the counter $600 trillion. What are you really hedging?”

He questioned the ability to track, even with modern technology, the 930,000 derivative contracts Lehman was holding during the crisis.

But it’s not just a financial concern.

In this age of Facebook and social networks, there is an ever-present concern over privacy. As Davidow quipped, with the Internet “you get to where you are going before you even left.” Later, “We do dumb things. We connect things that don’t need be connected.” For example, companies are able to learn more about us by stringing together bits of information — our name, then our telephone, then our address… etc. — that might not have significant value individually, but eventually can lead to unintended consequences when used as a whole. What about the 1974 Privacy Act that prohibited government agencies from connecting all these databases, he asks. “Then something bad happens.”

On economics, Davidow referenced Adam Smith. Back then, he contends, there was moral control in the markets. “If you did someone in, you had to go to church. Suddenly when you have connected markets the “externality” doesn’t feel cause and effect.”

And the discussion could not be complete without a mention of the very relevant case of WikiLeaks.

Davidow: “I thought a lot about that one. You got to figure out if it’s bad or good. If you think it’s bad then here’s one guy who can do something that 1,000 Russian spies couldn’t dream of … it tips the odds to individuals who want to do harm.”

The stakes are high, and the world is increasingly connected. It’s unlikely we’re going to revert back to simpler times. What, then, is the solution?

“Breakers” were mentioned. Like circuit breakers, these are safety nets programmed into large connected systems that can help mitigate catastrophe. However, many are in place already today, and you have to wonder if they’re really all that effective. The solution is probably not a single mechanism.

Dilution was another possibility. 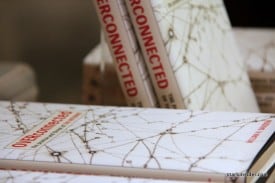 One thing Geoffrey Moore suggested — and where perhaps the two disagreed most on this particular evening — is that future generations, including millennials, will not see technology and overconnectedness as impediments. “If you are born with it, it is not technology,” he said, citing a young child using an Apple iPad and thinking nothing of it; it will be a tool. Then he laughed, “You know, when I grew up collaboration was called cheating.”

And, in case you didn’t guess already, yes, Bill Davidow does have a new book. And it’s called smartly enough: Overconnected. Those that paid $27.95 for it last night, were able to get it signed. Those that prefer the connected online shopping model, can get it for $16.46 via Amazon where it currently enjoys a 5 out of 5 star rating (and doey-eyed Loni: you’ll be happy to know it’s also available on Kindle for $9.99 via Whispernet). I think Bill would very pleased if this positive reinforcement leads to a perpetual buying cycle.