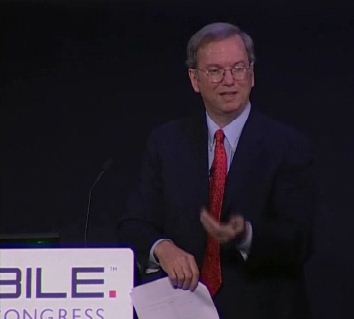 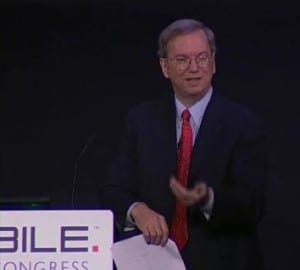 There were no product announcements by Google at MWC. However, during his keynote, CEO Eric Schmidt mentioned that Google along with their partners are now shipping 60,000 Android devices daily. That works out to over 21 million units per year, and would place Google in the fourth place after Nokia, RIM and Apple.

The exact definition of the number was unclear. Is it retail shipments? Factory orders? Or some other data point. Regardless, it’s not much of a stretch to see that Google’s mobile presence is growing, largely in part to the rapidly maturing Android operating system.

“The phone is no longer a phone. It’s your alter ego,” said Eric Schmidt, Google CEO. “The new rule is mobile first in everything.”

With Windows Phone 7 on the horizon it will be interesting to see how this market shakes out.

Google has taken an open approach, licensing Android to other manufacturers such as HTC (which manufacturers the Nexus One for Google, in addition to several other handsets), Samsung and Motorola. Apple and RIM, on the other hand, employ a strategy centered on vertical integration, which allows them to control an end-to-end ecosystem from design and manufacturing through to distribution and content. Each have their advantages. A closed model can bring higher margins, while an open approach can leverage the strength of a cadre of partner companies resulting in more resources.

2010 will go down as year of the mobile device. And every company wants to be known now as a “mobile” company. At the Apple iPad launch, Jobs reiterated it several times. Apple wants to sell three major products into three distinct mobile markets: smartphone, tablet and laptop. Microsoft has been trying for years, with limited success to crack the space with a mobile version of Windows. At an estimated 13% market share, results have been disappointing.

Why the rush to mobile?

It’s where the eyeballs are. And so go the ads. And the big time money.

Although late to the mobile space (the first Android smartphone came out in 2008), Google has several distinct advantages to draw from, not the least of which is its dominance in search. Mobile search is a natural fit. As is other products such as Google Maps, Gmail and Docs which already work seamlessly on Android handsets. This built-in install base gives Google a tremendous head-start when launching new services such as Google Buzz for example.

Interested in more? Check out my interview about Google, Nexus One with a Canadian newspaper.