Just like we see in the auto industry, firms like to track how leading smartphones depreciate over time.

The latest report via SellCell compares two of today’s biggest sellers: the Samsung Galaxy S21 vs. Apple iPhone 12. Both are the respective flagships so it’s interesting for those looking to make a smart buy and maximize their return when making shopping for a new (or used) phone.

I don’t think the results will necessarily surprise anyone. Apple has been known to be a premium positioned product with a strong secondary market. Meantime, Samsung runs Android which is more readily available across hundreds if not thousands of devices; many (and most when compared to the upscale Galaxy line) are priced lower than its phones.

In any case, here’s a quick summary of the key findings.

Samsung Galaxy S21 vs iPhone 12: Which Smartphone Holds Its Value?

On average the Samsung Galaxy S21 has depreciated about 45-57% since launch in January 2021.

Ouch. Based on the findings from this marketplace vendor the results easily confirm that the Apple iPhone holds its value better. Not by a little. But by a lot. You can see based on the summary above that the iPhone 12 held anywhere between about 23-27% of its value when compared to the Samsung Galaxy S21 line.

Depreciation — again, like we see in cars — is dependent on the model: 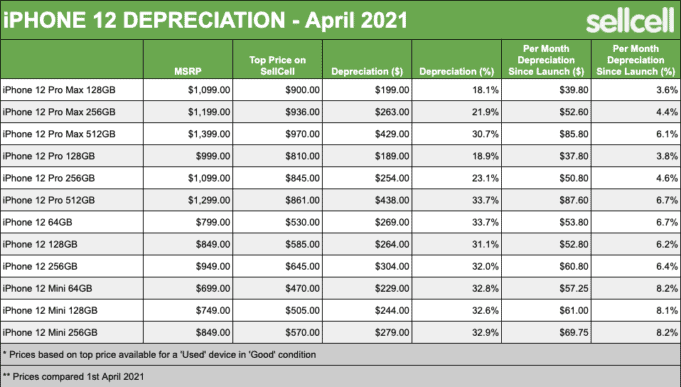 A key takeaway from this report is that the more expensive models such as the Samsung S21 Ultra 5G 128GB and Apple iPhone 12 Pro Max 128GB depreciate less on a monthly basis when compared to their lower-priced siblings such as the S21 5G 128GB and iPhone 12 Mini 128GB.

Clearly, if you want the best return down the road and can live with less memory it’s the way to go, at least if you want to retain the maximum value.

Samsung buyers are more likely to switch when upgrading.

SellCell concludes with some thoughts about why Apple phones tend to hold their value better than the Samsung Galaxy phones.

It’s hard to pinpoint a specific reason. Several likely apply here including brand loyalty (Apple scores 92%) and that “demand is still there even after that initial sale.” Further, since Samsung buyers are less loyal to the brand they are more likely to switch to an iPhone when upgrading hence further reducing demand and resale value for Galaxy handsets.

In the end, I think this data and the results are consistent with what we generally see from other marketplace vendors and analysts. Of course SellCell has a vested interest here to draw buyers and sellers to its platform, but that doesn’t necessarily reduce the credibility of the results as they are likely privy to lots of real-time pricing information as sales happen on its site.

Consistency reigns: Apple is the premium brand with premium pricing, and Samsung (and Android as a whole) is the value play with a lower cost of entry, but also less value retention.

Whichever matters to the buyer is a matter of personal preference. But at least it’s good to know what’s likely to happen to the value of your smartphone over its lifetime.