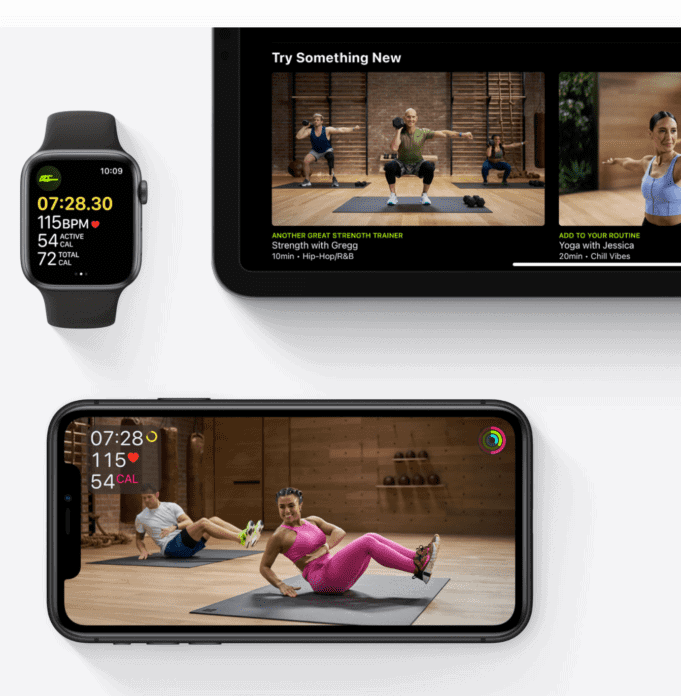 Home-based workouts are the in thing at the moment. COVID-19 has driven us into our homes and forced gym closures across the country as we all know too well. Companies like Peloton Fitness, Inc. (NASDAQ: PTON) and Fitbit (NASDAQ: GOOG) have benefited from demand for their products in lieu of outdoor or gym options for staying in shape.

And now Apple has arrived on the scene.

Today during the slick online Apple September ‘Time Flies’ Event, the Cupertino-based tech giant introduced Fitness+ (Fitness Plus) which will is priced at $9.99 per month or $79.99 for a year. That puts the service on par with Fitbit and undercuts the Peloton digital app which is priced at $12.99 per month.

Apple says Fitness+ will be available late 2020 for iPhone, iPad, and Apple TV.

Of course I like all that tech stuff too, and maybe I’m being a little negative with this criticism. It’s just sort of odd to have such live reactions to consumerism especially today in a world that is facing so many challenges.

So I really, really like the virtual version of Apple’s events. The production value is off the charts, the speakers smart and engaging, and the overall flow is smooth and well-paced, without unnecessary pauses for applause. Count me in as one who’d be perfectly fine if this was part of the new normal.

As you might expect Fitness+ offers an expansive catalog of workouts including cardio, strength training, yoga and more.

And like Fitbit which offers both fitness trackers and a subscription app service, Apple is betting heavy on the new Apple Watch Series 6 as a companion product that many will want to have to track their fitness. In fact the Apple Watch is so strategic to this fitness push that it led the event and received the most air time, covering a myriad of features including blood oxygen monitoring, a brighter screen (2.5x), and, yes, real-time ring sync with the new Fitness+ service.

Isn’t it refreshing when a tech company announces new products that are readily available within a matter of days. Even during a pandemic. Something tells me Apple is a well-run company. Just a hunch there.

Will Apple Ever Sell a Spin Bike to Compete with Peloton?

Announcing a fitness subscription service is likely just a first (baby) step for Apple. Fitness+ gives the company another recurring revenue option that will appeal to many who don’t want to go back to the gym or prefer the flexibility of taking classes whenever and wherever they are at any time.

What if Apple took it a step further and launched, say, a spin bike to compete directly with Peloton?

I don’t think it’s a far-fetched idea. If home fitness and the home gym is here to stay long-term wouldn’t growth tech companies want a piece of the market?

Obviously the answer for Apple is yes. Hence: Fitness+.

However, a hardware product — a spin bike, rower, smart bike, something like the Mirror — to go along with its workout classes could help boost brand loyalty. Because once us consumers have a large piece of actual physical equipment in our homes it is less convenient to make a switch to a competing brand. I have a Peloton bike I bought in March just as the pandemic broke and gyms closed. If Apple did at some point launch a bike, I’d be very interested. Could you imagine? It would likely have an incredible iPad display with Apple Music and all sorts of Apple services including best-in-class sync with the Apple Watch. But. It wouldn’t be so easy for me to switch as I have a (heavy) Peloton bike sitting in a bedroom. I’d have to sell it and go through all sorts of inconvenience, not to mention taking a financial hit. So Apple could do well to have both the software subscription service (switching is easy with no hassle) and hardware such as a bike (switching is less convenient). In business school theory: vertical integration.

That Apple has shifted so abruptly from positioning the Apple Watch as a fashion accessory (remember when?) to selling its fitness prowess tells you a lot about where CEO Tim Cook and team see the market going. And that is the consumer fitness business. And, incidentally, PTON stock is seeing a small pop today. My guess is that Apple’s move into its space, if at least partially through an app, validates the market as a huge growth opportunity. There will be room for several players, but my guess is about three will own the lion’s share of the segment in a few years. Apple will undoubtedly be one of them.

Meantime Apple stock (NASDAQ: AAPL) is down slightly today as of this writing — we knew this announcement was coming and so I guess the expectation was already priced in as there were no surprises. (Update: Peloton CEO John Foley today in investor meeting about the Apple news: “It’s quite a legitimization of fitness content”).

Friendly competition is in our DNA. Welcome to the world of digital fitness, @Apple.