If you’re like me and ordering wine from locals in and around the San Francisco Bay Area, here’s an interesting offer.

Francis Ford Coppola has unveiled an “Art + Wine Collection”. Order 24 bottles of wine (a mix of reds and whites) and you’ll received a signed copy of the script for the iconic The Conversation (1974).

Like any of Coppola’s films from the 1970’s, including The Godfather (1972), The Godfather: Part II (1974) and Apocalypse Now (1979), The Conversation is a classic — a must watch, a film to see before you die. This is back when editing didn’t need to be SuperHero-fast and no green or blue screens were to be found anywhere on set. Film grain dominated the aesthetic. Sound design was pure art. And, in this case, most of the films of this era featured unforgettable and nuanced character studies, in this case by lead Gene Hackman — playing a character who is an expert in sound analysis.

Coppola both wrote and directed the film which won the Palme d’Or at Cannes and, for curious local film buffs, features many (iconic) scenes shot in San Francisco.

Needless to say to own a signed copy of the script (dated 2020 no less) would be an interesting proposition for any collector.

One caveat: the price.

You need to buy the aforementioned mix of 24 bottles of wine which would set you back $800 USD. In a world of COVID-19 that means this “one-of-a-kind-collection” will be priced far out of reach for most buyers. Then again the rarity of such a signed script could mean a future collectable. And if you work out some tablecloth math, 24 bottles for $800 is $33 per bottle. Not bad considering this is a premium brand. The extras are just gravy on top.

In addition to the script, the product description on the The Family of Coppola web site says buyers will also receive an invitation to a live, online conversation with Francis Ford Coppola. Also, a digital code is included so you can download a digital copy of The Conversation (Apple, Google, Vudu, FandangoNow). All in all a pretty neat package to be sure. 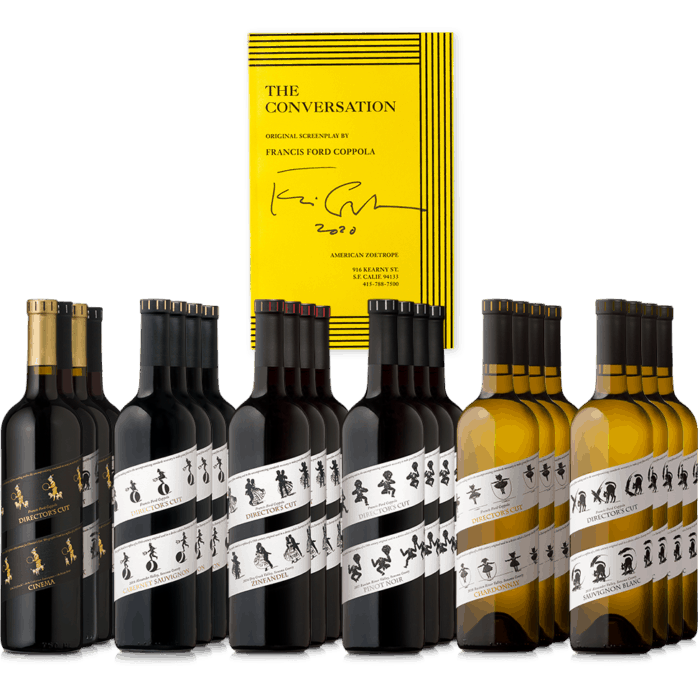 Many years ago when we were regularly covering Napa, Sonoma and other wine regions here on Stark Insider (a veritable lifetime ago, in a pre-pandemic world), I was fortunate enough to briefly meet the legend himself. Coppola was hosting a luncheon for wine media at his gorgeous winery as part of the “Day in the Dust tasting” at Rubicon Estate. He was as friendly and generous as you could ever hope (years later we also met his daughter Gia for an interview during the press tour for Palo Alto). At the main entrance to Rubicon you can also enjoy all sorts of props and memorabilia from his films (I’m not sure if they are still on display today). If you get a chance to go, highly recommended — hopefully, when things return to normal. I also recall enjoying a very generous and delicious lunch on that fleeting and beautiful summer day in wine country. And, of course, being spoiled by some equally generous wine pours.

Those were the days.