Any day you find yourself in Rutherford, in the middle of Napa, is a good day. Knowing you’re going to be able to taste through more than twenty of the finest Cabernet Sauvignons (and Cab blends) this AVA (created in 1993) has to offer is like getting your Hagen Daaz fix intravenously. It’s surely too much of a good thing, and it doesn’t happen often.

First, a confession: I admit, having lunch with Francis Ford Coppola was, even for this jaded, small-time ginger from Ottawa, Canada, a thrill. Having directed best movie of all time, The Bellboy and the Playgirls, it would be a rare star-struck moment for me. The Godfather of film, and now wine, was gracious, and a generous host.

And so on a somewhat overcast, temperate day in the valley I headed up north to Napa to the sprawling, gorgeous Rubicon Estate, where the Rutherford Dust Society (RDS) had invited a group of media (and trade for the grand tasting held in the afternoon) for some — as energizer Gary Vee might say — sniffy sniff, and plenty of whirly whirl.

We would taste through two flights of eleven wines (approx. two minutes per wine), ranging in price from $26 to $200. Here’s my take on the wines, plus I pick a few of my favorites, and toss out a few recommendations.

Meanwhile, part of me wondered, is there anything to this “Rutherford Dust” – is it really magic, or is it a prime example of wine marketing in action…?

It’s worth noting that this was a blind tasting. Most of these are not, so it was a welcome change to see numbered glasses before us, nary a cheat sheet in sight.

If you’ve never tried it I highly recommend brown bags at home to hide the labels.

You might be amazed at how much more alive your senses feel when you have no knowledge of price, brand, vintage (and possibly even varietal). It completely removes bias. It’s like switching off auto-pilot and taking control of the yoke. There’s a visceral thrill when you taste the wine knowing that you need to rely purely on what your nose and palate are telling you. And on this day: I was picking up good, good good, good vibrations. 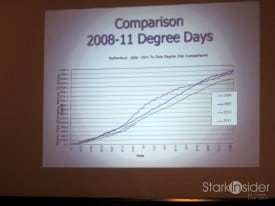 I won’t try to summarize the entire ’08 vintage here. I only tasted 22 wines on this day, and there are others who do this for a living. But I can share some of my impressions. Palates, of course, vary, and this is where understanding a writer’s preferences can come into play. You might like your reds big and bold, with lots of tannin and structure. Or you may prefer them laid back, mellow. Neither is right, nor wrong. Quality might be an issue, however. Wines can be made poorly – they can be rushed to market, fermented in low quality barrels, abused with all sorts of machining processes and chemicals. This was not the case on this day. For the most part, these wines are produced by wineries with multiple generations of ownership. They’ve been around. It doesn’t guarantee a good wine, of course, but we’re not talking Three Wishes or Two-buck Chuck (and I have nothing against price as you’ll know if you’ve followed Stark Sips over the years).

On this day, there couldn’t be an expression further from the truth than the over-used “fruit bomb” to describe these ’08s.

Instead what I found were balanced wines, relaxed wines.

In fact consensus there might even been too little fruit from the wines made on the Eastern side of the Rutherford AVA. Overall I could’ve used a bit more “barn yard” (might as well pile on everyone’s favorite adjectives!) and tobacco notes — these are two of my favorite qualities in Cabs (and Pinots especially).

A Day in the Dust – ’08 Rutherford Cab Tasting Report

One of my favorites was this Conn Creek sleeper by Mike McGrath. At only $45 it was second cheapest of the lot. Unfortunately according to the notes it won’t be available until spring 2012. Still, it’s my value pick. It has a nice amount of red fruit (without going Skittles crazy). I like the vanilla, and found the minerality/stone on the nose to be keen stuff. $45, 200 cases, spring 2012.

Stellar stuff from a top brand. It might be just me, but I even picked up hints of mint on this one. It’s rich and concentrated, yet doesn’t leave your mouth feeling like it’s returned from a visit to the chalk dust factory. Cellar worthy. $145, 7820 cases, 9/1/11.

I’ve been aging some earlier vintages of this BV Latour, and can’t wait to see how it fares in a few years. It’s dark in the glass. It might very well be the best example of the so-called “Rutherford Dust” – je ne c’est quoi. Pop one of these and the occasion becomes special without breaking the bank. Lovely balance, with a nose that is fuller than full. $115, 8200 cases, 8/1/11.

Backberries here. Again, balance (I need better adjectives!). My tasting notes had blackberry written a second time, with an underline, no less. Tannins more relaxed relative to some others. 225 cases, $80, 11/1/11.

This was my first time tasting a 12C (“Twelve-C”) – the equivalent of 55F, the optimal storage temperature for wine. This sophomore effort brings nice spices, with a smooth finish. And, again, that bouquet is marvelous, my darlings. 120 cases, $70, 8/1/10.

On a day with so many standouts, it was this Staglin that most fully captured the essence of a good – damn good – Cab. It’s why we love these reds. It’s why we savor that glass, watching the sun go down over the Pacific, or enjoying a lazy summer evening in the yard with family and friends. Well rounded, textured, and with retrained intensity (kind of like Wendi Deng). 2600 cases, $185, Fall 2011.

Later someone asked about the rationale behind the order of the wines… was there any logic, rhyme or reason? And, yes, indeed it turns out there was. The flights were organized — more or less — geographically, starting from the southeast corner of Rutherford, heading north then west, before coming back down south to finish in the southwest corner of the AVA. Again, more or less. It was as if we were “riding a bike,” was how Paul Wagner of RDS put it.

The ’08s show uniform balance, and although in short supply, are well worth your effort to source. Collectors will want to get the low volume runs with enough tannin to age (Monticello, Sullivan come to mind). For those lost in the wine sections of your local boutique, I’d almost go as far as to say picking an ’08 Rutherford Cab would be a good start, regardless of price – a sweeping generalization, I know, but things are looking very positive for this vintage; just as I’d say look for ’07 Russian River Valley Pinots.

2008 was a challenging vintage (but a cakewalk compared to 2010), but the results are impressive. When you hear about Rutherford Dust, believe the hype.

Now, what about this re-imaged version of Dracula I’ve been hearing about… Keanu Reeves… can that be right?!