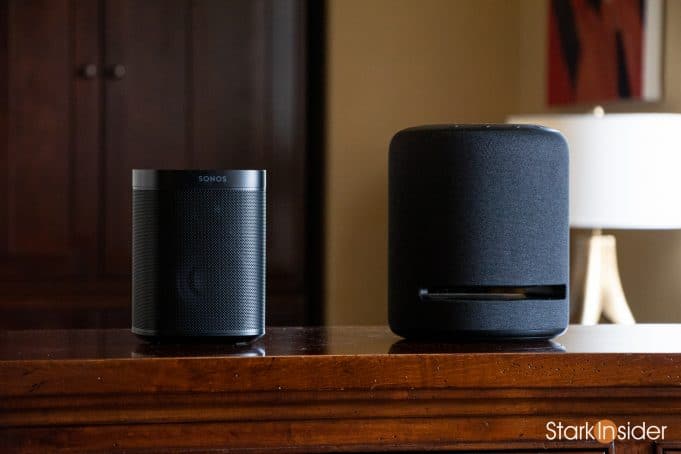 eMarketer says that while the absolute number of smart speakers will continue to rise, “growth will slip into the single digits.”

“Smart speakers were designed as entry-level devices to get more people used to voice-controlled technology,” said Victoria Petrock, a principal analyst at eMarketer. “Over time, we’ll see slowing growth in the number of smart speakers as people turn to voice assistants built into other things within homes, vehicles and on-the-go. Amazon’s next challenge will be to maintain its dominance in these other environments as well.”

Meanwhile it looks like Amazon and its Alexa-based smart speakers will continue to dominate.

In 2019, Amazon led the market capturing 72.9% of smart speaker users according to eMarketer.

The next nearest competitor is Google, trailing significantly with only 31.1% share. Other vendors including Apple HomePod, Harmon Kardon Invoke, Sonos One account for the remaining 17.9%.

It’s not much surprise the smart speaker market is slowing. The last few years have seen dizzying growth numbers. Most notably Amazon, who was first to market with Echo, followed by Google and its Google Assistant based devices, have been racing to capture share. In essence, the smart speaker has become a strategic building block of their respective visions of the smart home. Voice assistants are the interfaces, and the huge machine data sitting somewhere in the Amazon and Google clouds ensure that our every whim and curiosity is satisfied are the engines. Or, if it isn’t, look for it to smarten up in the next .1 software release — which will be stealthily pushed to all the devices sitting around our homes without anyone being non the wiser.

Smart speakers are but one piece of the ecosystem.

Amazon would like us to secure our homes with Ring Alarm. Google too with Nest.

Then there’s video oriented devices like Fire TV and Chromecast with the goal of taking over our family rooms and letting us stream just about anything at any time.

And at the heart of it all is the subscription. Likely the real money makers for the future. After all, hardware is a commodity. But lock someone into, say, Amazon Music or Google Music, or Amazon Prime Video or Google’s YouTube TV and you earn the right a potential perpetuity of monthly revenue. Go cheap on the (low margin) devices, but charge a premium for the (high margin) services. Either way the goal is to get a foothold in the home with a cheap device like the Echo Dot speaker, and expand the footprint from there — the more you can proliferate in the home the less likely the consumer is to switch platforms. That’s why these early days of the smart speaker (and smart home) are so critical for the early players.

Amazon is leading by far in that respect. Google is in the game, and looks to even grow slightly according to this report in the coming years. Apple, meanwhile, needs to focus on catching up or continue to cede share to the early leaders.