I don’t know about you, but I’ve always had a heck of a time editing the video files that come out of the (fabulous) Panasonic GH5. Panasonic’s flagship camera has just about everything you’d want in a video camera, and in my estimation in two years of use for Stark Insider, is close to perfection.

But those .mov files the GH5 outputs?

For whatever reason they don’t scrub well in Adobe Premiere Pro. Which is especially frustrating given everything I’ve read suggests there are no similar issues on other major NLEs like Resolve and Final Cut Pro.

Thankfully, the situation seems to be improving.

Anecdotally I’ve found my existing GH5 footage to be behaving better on the Premiere timeline in recent weeks. I say anecdotally because I haven’t timed anything or ran official tests. Measuring scrubbing efficiency is a tricky thing. It’s almost like appreciating an exhaust note or engine rumble or espresso shot. Some will appreciate what others don’t and vice-versa. Though, we can agree timeline scrubbing is far from completely subjective, you can either scrub across the timeline smoothly and quickly or you can’t. There is a degree or two, however, of what an editor can or is willing to tolerate.

I stumbled upon this Fstoppers article “Tested: Premiere Pro 2019 is Significantly Smoother” which confirms that perhaps indeed the performance improvements of my GH5 clips wasn’t entirely in my head:

“Recently I opened up a project in the 2019 version, to edit footage from a GH5. The 8-Bit 4K footage can be a little taxing, but I was able to scrub through it just fine. It’s not quite as smooth as a ProRes proxy, but it’s about eighty percent there. This is huge news!”

That is huge news.

In the past I’ve had to resort to generating proxy files before working on a project in Premiere. Not too big a deal. But for large projects such as 3 Days in Sonoma and Azul and now my in process work 3 Days in Paris (which also includes lots of RED and Sony a6500 footage), this can be an extra step that requires hours it not most of a day plus possibly an overnight process of having Media Encoder generate smaller zippier files. Once done proxies work wonderfully well. When it’s time to export, Premiere automatically uses the original files so you get full resolution output with the benefit of a quicker, smaller file for editing.

3 Days in Paris Timeline in Process: 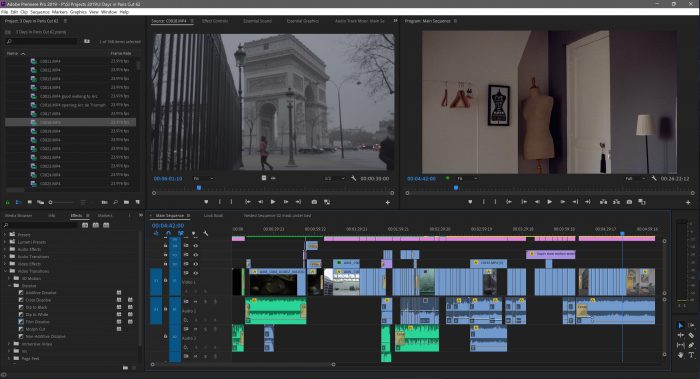 Oddly, Redcode (R3D) from our RED Scarlet-W plays back smooth as butter in Premiere. Even at 5K in full resolution! Odd? I guess rather that should be: amazing. At least, until I add adjustment layers and effects. Then things slow a bit, but still scrubs pretty well (and far better than the GH5 files).

Hopefully you’ll too notice some performance improvements. And let’s hope this is just the beginning. Hint: I’ll gladly take a few Premiere Pro stability and bug fix releases in place of all that sizzle known as new features.