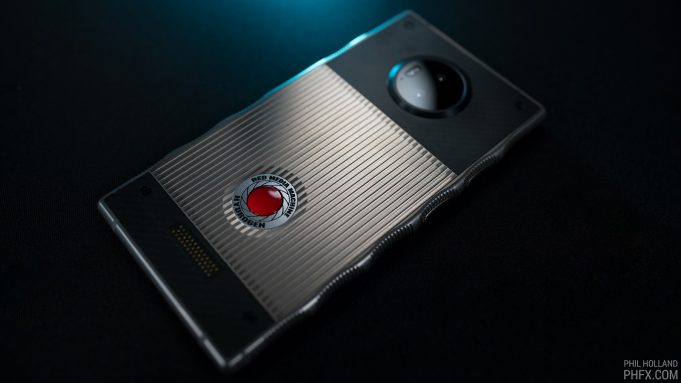 Big changes are coming to the Hydrogen One smartphone. Digital camera company RED, makers of higher end cinema cameras such as the Dragon and Epic, announced that due to a “series of obstacles and the new discoveries” the Irvine-based company would take the opportunity to significantly improve the entire program.”

The update came on the heels of a Reddit user noting that the modules section on the web site for the Hydgrogen One had been removed. (PS- the internet doesn’t miss a thing these days).

Red Digital Cinema (RED) founder Jim Jannard confirmed that was the case in an update on the horribly named H4Vuser.net — a forum for users of the innovative and would-be modular mobile camera based on the Android operating system.

One of the big features touted during the Hydrogren One  ($1,295 USD) launch was its holographic display. It apparently had the power to wow people — their reactions became a big part of the marketing push early in its promotion. It’s unclear if RED is going to move away from the whole holographic imaging thing and, perhaps, focus more on traditional video and camera technology. We don’t know yet. Jannard says that they will share more information soon when the deal with things, including “patents for one.”

As a RED owner my (selfish) hope is that Hydrogen One becomes a mobile cinema camera that can shoot Redcode (.R3D files). That would be ideal for someone like me who, at times, needs a small camera for shooting scenes discretely in public or for when lugging around a Scarlet-W is just too impractical. To have a pocketable Redcode shooter would be wonderful. I’m not at all interested in AR/VR/holographic stuff in the least, so, again, this is a bit self-centered no doubt, but if RED CEO Jarred Land and the team re-focused the One and its modules as a high-end mobile video capture device I’d be very interested.

Meantime Jannard has emphasized that the Hydgrogen One program is “alive and well.” And also reiterated that the core mantra of “obsolescence obsolete” remains intact, which should mean existing Hydrogen owners (those early adopters that took substantial risk) will likely be entitled to some sort of upgrade path to subsequent releases — this is something that RED has offered to its traditional camera business customers for years now, and, in my view, it’s a key differentiator that the company brings against competitors like Arri, Sony and Panasonic.

Big Changes to the HYDROGEN program

Some have noticed that we have taken down the images of the 2D module from our website.

The reason for that is because we are currently in the middle of radically changing the HYDROGEN program. As I have said before, everything can and will change.

A series of obstacles and then new discoveries have given us the opportunity to significantly improve the entire program, not only for HYDROGEN but also for RED.

The changes create new opportunities to better satisfy the professional image capture customers as well as the casual consumer for the HYDROGEN program.

The RED team, led by Jarred Land, as of now will now be fully in charge of the professional image capture program for HYDROGEN and the HYDROGEN team is fully engaged on the new in-device image capture system. Both are major advancements to what was previously posted.

As a side note… all HYDROGEN customers will be “obsolescence obsolete” when buying into the new professional image capture program.

While I understand the post is a bit cryptic, there are a few misnomers out there already.

HYDROGEN One is alive and well… with more updates continually making it more powerful and better with each update. In fact you can expect one of the most significant 4V updates in the next two weeks.

In the absence of clear messaging, the crowd goes crazy trying to fill in the blanks. We will post more info when we can, but we have things to clean up (patents for one) before we give out anymore info.

One more clarification… “obsolescence obsolete” for HYDROGEN owners means that your H1 is NOT obsolete when the Pro camera version comes out. Not sure how this got twisted up…

So it would seem that early market feedback (and likely sales too) of the Hydrogen One necessitated a change in direction. Again we don’t know the true reason… and we also don’t know if the revised strategy will entail moving towards something (far more risky) like out-there display technologies including 3-D holography or something (far less risky) like traditional RED imaging technology packaged into a mobile offering that might appeal to existing customers. Early rumors suggest that indeed the next Hydrogen One (Two?) would have a RED “in-device” camera.

Last weekend I tinkered with anamorphic iPhone videography while visiting the de Young Museum in San Francisco. I backed Moment last year and finally had a chance to use their anamorphic lens. I downloaded a fantastic app called Filmic Pro to control the iPhone camera. The results are pretty decent for a phone camera. My biggest issue was storing all that widescreen 4K footage onto the phone itself, which is fairly limiting when it comes to storage space — and, of course, you can’t swap out memory cards like you can on a dedicated camera. Famed director Steven Soderbergh doesn’t seem to have issues (see Unsane, High Flying Bird) and has been quite public about his recent affection for shooting his movies on an iPhone. And no wonder. He can move quickly from scene to scene, and as needed capture angles and camera moves that would otherwise take more time to setup using traditional, larger cinema camera. Currently in lieu of a RED offering in this space I use the incredible and now heavily discounted Panasonic GH5.

As smartphone cameras get better and better, I would not be surprised to see them make further inroads into indie film. Why not? They’re far more affordable, and we already own one. Being compact and able to fit in your pocket or purse is icing on the cake. So it’s right there begging to be used for something — anything! — other than social media.

This is why I believe RED would be better served to go after the smartphone with its own mobile shooting device. Because Apple, Google, Samsung and others are themselves already gunning for the videography market, YouTubers and filmmakers. It’s early, but if I were a camera maker I’d be watching this space — along with the idea of computational photography — very carefully and planning accordingly.