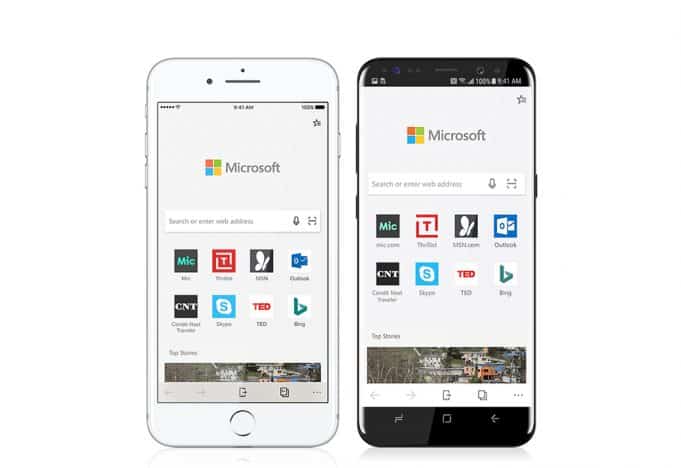 Key features include the ability to move from a PC (running Windows 10 Fall Creator’s Update) and mobile device and continue “where you left off”, a hub view that acts as a dashboard of sorts for your favorites and history, and data sync across devices.

Nothing revelatory to be sure. But for hardcore Windows users who occasionally need to use an iOS or Android phone or tablet, it will surely be welcome news.

For the rest of us — Chrome and Safari and Firefox folks — the decision to switch will be a tricky one to justify.

Given that most iPhone users don’t change the default browser, for them their world will continue to be Safari, and probably even unbeknownst to them that there’s even choice in the matter. Status quo.

Chrome users are likely deep in with bookmarks and sync’d data across multiple devices. To switch, the big question will be: why? What compelling differentiation will make us Chrome users try mobile Edge? So far I don’t see any reason — then again I don’t see that as the driving reason Microsoft launched these pair of apps.

I gave Edge a quick run on an iPhone 7 Plus and after a standard credentials verification process was no surprisingly (given Edge’s performance on Windows desktop PCs) impressed by its speed and design.

Anecdotally loading web sites in Edge resulted in fast page loads and smooth scrolling. Yet, compared to Safari and Chrome I didn’t see any noticeable different in daily use — that could be different on Android of course.

Regardless, the Edge app gives Microsoft a further foothold in rounding out its Windows 10 mobile strategy which is coming together quite nicely under Satya Nadella. In a little over three years Nadella has finally established Microsoft as a company that is ready to not only survive, but also to thrive in the cloud generation. The company may have (badly) lost the phone wars to Apple and Google, but it still is a huge OS player thanks in large part to a successful reboot centered around a re-designed Windows 10.