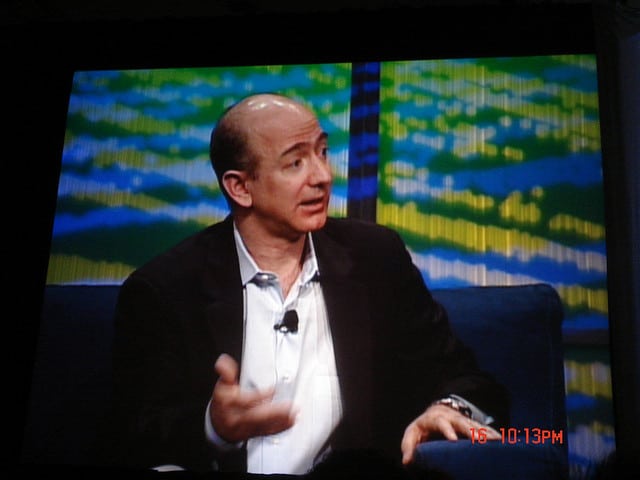 It’s all Amazon. All the time. Everywhere. And I mean everywhere.

With its mega $13.4 billion acquisition of retail food chain Whole Foods Market, Amazon CEO Jeff Bezos continues to execute on a master plan that seemingly knows no bounds. This deal dwarfs, by a substantial factor, all previous Amazon acquisitions including Twitch for $970 million (2014), Zappos $920m (2009), Kiva $780m (2012), among others.

Imagine, at one moment in time when Yahoo was a basic web index with simple text on a grey background. Amazon sold books. And Apple… well, Apple back then was hanging on to dear life, and flirting with bankruptcy.

Now we’re living in the era of the so-called “FANG” of four: Facebook, Amazon, Netflix and Google. Many believe those to be the major tech stocks to follow in terms of gauging the broader market, in addition to the appetite for start-up funding. Perhaps it should be “FAANG” to include AAPL.

Amazon + Whole Foods is yet another move in Bezos’ quest for retail domination. Or, how about, shopping domination in general. Online in combination with traditional brick and mortar (especially the prime-time, high income locations that Whole Foods stores afford) will likely further the shopping stranglehold that finds the likes of Walmart, Target and Best Buy, struggling to compete. Would Google counter, I wonder, and buy Costco?

I expect Amazon to move fast. Look for integration to happen very quickly. After all, Amazon didn’t become a $470 billion tech juggernaut by working half days.

What can we expect to see coming soon to the Whole Foods experience? Here’s some ideas.

Not much of a leap here. Yesterday, Amazon revealed an extension of its Dash automated ordering products. It’s called the Wand and it’s magnetized so you can stick it on your fridge. Run out of something, say paper towels, and thanks to Alexa voice recognition you can tell the Dash Wand to order more. So it makes sense then that we’ll see these $20 gizmos at Whole Foods checkouts everywhere.

More low hanging fruit. Add bot/self-serve checkouts. Give Prime customers a discount for using them. Amazon told the New York Times it won’t be using its Amazon Go sensor/camera/app technology, but I can’t see how at some point they will also use some, if not all of it, when the time is right.

Amazon Pantry is an optional Prime service that is all about groceries. It doesn’t take a rocket scientist to see how Amazon could immediately tap into Pantry, and extend it to brick-and-mortar delivery. Order groceries on Amazon, and pick them up at your local Whole Foods (with a discount), or just have them delivered normally to your door (for a premium). Recent data shows that about 12% of U.S. shoppers buy their groceries online (2016, Cowen and Company).

No doubt we’ll see all sorts of new skills when it comes to Alexa voice recognition and Whole Foods.

Another obvious one. Amazon wants Alexa-powered devices all over our homes… so that, in effect, our living spaces are transformed (to us unwitting hipster consumers) into retail spaces that cater to our every whim and desire.

7. Amazon Prime is Going to Get Even More Packed with Services

Look for Amazon to target young families at the upper-middle class levels, those that have money to spend on organic products, and those also with disposable income to buy gadgets (the majority of Amazon Prime members earn more than $100,000 per year). They will be the ultimate demographic for new Prime offerings that would include some sort of combination of regular Amazon Prime, plus things like Pantry, Subscribe and Save, and same day delivery. The idea, like it is today already, will be to continue to get families hooked on the convenience — a vendor lock-in of sorts.

Tweet of the Day:
“Alexa, buy me something from Whole Foods”

Bezos: “Alexa, buy me something from Whole Foods”

When you see a Whole Foods store, you know there’s a certain affluence level to the surrounding neighborhoods. I’m not exactly sure of the details surrounding real estate ownership, and financial structures, but no doubt the 431 stores are sitting on valuable land. So how will this benefit Amazon in addition to the aforementioned ideas? Simple: advertising. No surprise if, eventually if not at first, we see some sort of minor Amazon branding on the Whole Foods stores themselves. Amazon will need to be careful. Whole Foods has built a valuable brand, and the idea would not to make it look like a discount store. Still, those locations can prove to be powerful places to advertise, hold events, and further extend an online experience into the touchy-feely real world.

Okay, time to put out a few fliers… these are some wild-eyed ideas… the (possibly far-fetched) Big Ideas!

Amazon could turn Whole Foods rooftops into drone airports. From there, drones could make fresh grocery-to-home deliveries. I’m not so sure we’re going to see drone delivery in the short-term, but as a long-term strategy it has interesting possibilities. Or maybe not. Just putting that one out there.

I’m not so sure there’s enough space, nor that Bezos would want to carve out valuable, high-margin retail space, with an Apple-like lounge, but I’m guessing anything is possible. What if? What if Amazon tried to take on Apple’s customer experience, and build in highly advanced Genius-like lounges and bars? The idea would be to further the social aspect of going to Whole Foods. Many locations already have spaces for eating inside the store — this would take that idea even further by, of course, bringing in all sorts of Amazon tech products such as Kindles, smartphones, and tablets, etc. And there should be neon. Lots of neon.